Michael Haith knew Teriyaki Madness couldn’t rush out of the gates. When M.H. Enterprises purchased the brand in late January 2016, Haith was upfront about the challenge ahead. Getting Teriyaki Madness to an inflection point—one where it was ready for lift-off—would take years, not months.

It took three to be exact.

“I think we’re really about to hit our stride in building profitable shops and hitting that second gear,” he says.

The 50-unit brand, founded in 2003, believes it can double before 2019 ends. It has openings planned for Florida, Texas, California, Minnesota, Michigan, Illinois, Alabama, Oregon, Utah, and Colorado—all before summer. Haith, who was an investor and board member before acquiring Teriyaki Madness, is no stranger to the emerging space and wouldn’t project growth he couldn’t support. His past stops include Mau Wowi, Pour La France, and Doc Popcorn.

In the past three years, even with muted expansion in comparison, the brand is up 20 stores. It grew by 11 in 2016, then seven in 2017 before debuting just two in 2018. That pause in expansion was meant to settle the chain’s infrastructure before the real heavy lifting.

Teriyaki Madness brought in VP of marketing Jodi Boyce, a 20-year veteran who clocked time at Quiznos and Smashburger and former Chipotle chief financial officer John Miller in the same role. Haith then rounded out the C-suite with Janice Branam as VP of operations, Joe Gordon as VP of supply chain, Erin Hicks as chief operating officer, and Peter Harding and Hank Janik as VPs of real estate.

Branam previously served as senior VP of operations excellence at Smashburger and senior VP of training for Quiznos. Gordon arrived from Portillo’s and also worked for Noodles & Company and Wendy’s. Hicks held the EVP spot at Maui Wowi, and Harding and Janik worked at Einstein’s/Caribou and Moe’s Southwest Grill and Schlotzsky’s, respectively.

That’s a lot of executive firepower for a brand that had 42 franchises as of December 31, 2018, per its franchise disclosure document.

“Someone told me the other day we have about 150 years of experience on the team,” Haith says. “That really always accelerates things when you’ve got people who know what they’re doing.”

“It’s made a huge difference,” he adds. “I think for an emerging brand you’ve got the passion and you’ve got the energy of a new brand—something that’s really working. And then you layer maturity and experience on top of it.”

The Denver-based brand landed on Entrepreneur Magazine’s Franchise 500 for the third year in a row this past year. Teriyaki Madness touts profitability of up to 21 percent. It also earns high marks for a low initial investment range of $313,500–$653,860. 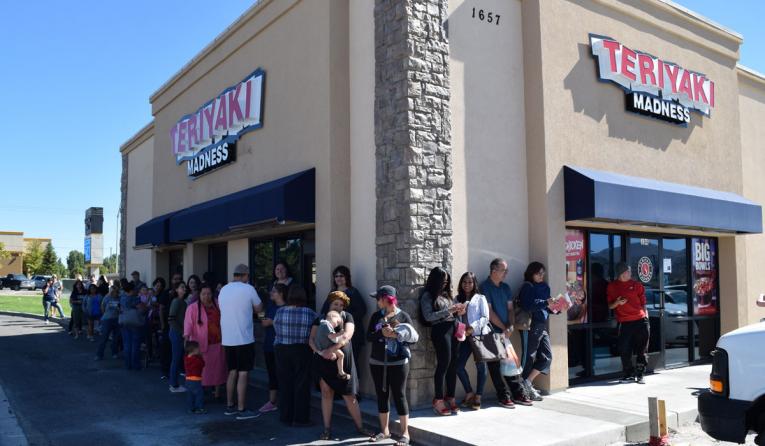 Haith believes Teriyaki Madness can march to 500 locations. Firstly, he says Teriyaki Madness doesn’t have a long string of competitors in the made-to-order Asian fast-casual segment. The chain offers a customizable footprint to perspective operators and will be able to grow rapidly without much kick back, Haith says, from strip malls to larger boxes. The typical unit is 1,800 or so square feet with seating for 30–40 people. It takes about 20–25 people to staff each spot.

And Teriyaki Madness can beat local competitors with technology and accessibility, he says. When Haith bought the company, about half of its business was coming outside the four walls. That’s now averaging 70–80 percent.

The company launched an order-ahead mobile app last summer. It features “redeemables,” which load into user’s app and can be used toward mobile or in-store purchases. It also offers map and location information, news about products and promotions, a customer referral program, link to jobs at Teriyaki Madness, and even a link to buy a franchise.

Teriyaki Madness partnered with Olo and Punchh on the launch, making sure it was fully integrated into the company’s point-of-sale system with Revel. The brand is focused on reducing friction further, Haith says, designing stores that cater to third-party delivery and pick-up, as well as continuing to build out a catering platform.

In regards to delivery, Teriyaki Madness has seen the channel jump about 25–30 percent. It’s a natural and differentiating element of the business, he adds, since Asian food already has delivery equity other brands don’t. Only, in this case, it’s actually branded. “We’ve really been able to take advantage of that,” he says, “and be able to build that piece really quickly.”

Haith says Teriyaki Madness is looking for operators who match its culture. “Folks who really want to build a business with us and partner with us,” he says. “We’re still at that small phase where people have an impact. That’s a big piece—having people who want to be a part of something.”

This Hot Chicken Joint is America’s Top Emerging Chain
Wing Zone is Winning by Controlling the Delivery Experience
Pandemic or Not, Dave’s Hot Chicken is Growing

Popeyes and its Chicken Sandwich are Still Soaring
Papa John’s Continues to Reach Unprecedented Sales
Sales are Up 20 Percent, But Marco’s Isn’t Sitting Back

The Impact of COVID-19 on Employer Policies and Operations
More than 40 Million Have Filed Unemployment Claims in 10 Weeks
Taco Bell to Hire 30,000 People in Coming Months

Delivery and Online Ordering Partnerships are Essential Right Now
Reopening Considerations for Restaurants and Bars
COVID-19 Will Inspire a Dunkin’ 2.0

Where Technology Fits in the COVID-19 Response for Restaurants
Will the ‘Ghost Kitchen’ Trend Continue During and After COVID-19?
Can Mobile Apps Bring Customers Back to Restaurants?