A celebrated New York City restaurateur is ramping up development of the fast-casual chain he founded in the early 2000s.

And no, it’s not Shake Shack’s Danny Meyer.

Tom Colicchio, a James Beard Award–winning chef and head judge on the popular reality show “Top Chef,” is spearheading a rebrand for his sandwich fast casual ’Wichcraft, which he cofounded with chef Sisha Ortuzar in 2003.

The rebrand is reflected in a new location that just opened in the East Tribeca neighborhood of New York. It’s the first new restaurant in six years for ’Wichcraft, which grew to more than a dozen locations across the country before scaling back to the nine it has open in New York today. It also marks a new beginning for the concept, which Colicchio hopes to expand up and down the eastern seaboard.

Colicchio says ’Wichcraft always had two great things going for it: the name and the product. It was everything else that was the problem.

“We started talking to our customers, started taking stock of what we were doing right and doing wrong,” he says. “We made a decision to change pretty much everything we were doing.”

The changes, which are featured in the new restaurant and will eventually be rolled out to other locations, include new design, branding, and menu components that Colicchio believes better tell the story of ’Wichcraft.

Food production, which originally focused on chef-driven sandwiches created in an open-kitchen format, has been tweaked so that sandwiches are created on an assembly line and the kitchen is behind closed doors. There are now dual lines at peak hours, and a separate line for salad orders. At the new location, the changes have cut average ticket times down to around 5 minutes from the 12–15 minutes it was taking at other locations, Colicchio says.

The menu itself has evolved, as well. There are now Organic Egg Bowls and Organic Egg Sandwiches available for breakfast, as well as new salad and grain bowl options. New signature sandwiches have been added, as well as a “Craft Your ’Wich” option for guests who wish to customize their meal. There’s now beer, wine, and organic soda, and Ice Cream’wiches for dessert.

Colicchio says the original iteration of ’Wichcraft relied too heavily on the strength of its product and not enough on its brand story and ethos.

The first ’Wichcraft opened next door to Craft and CraftBar, two of Colicchio’s signature full-service concepts, in 2003 as a way to take advantage of a good space and favorable lease. Originally, there were no plans to expand the concept, but the first store was so successful that ’Wichcraft quickly grew across New York and into Las Vegas and San Francisco.

“We were way ahead of the curve,” Colicchio says of fast-casual trends. “Unfortunately we weren’t ahead of the curve when it came to understanding the marketplace. We treated it like one of our fine-dining restaurants.” 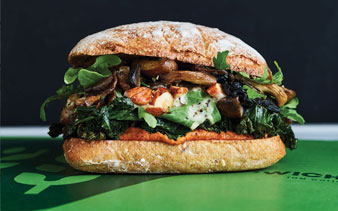 Colicchio says ’Wichcraft grew haphazardly and without much of an idea how to properly scale a fast-casual business. With the rebrand, ’Wichcraft will be more intentional about its growth and systems, and hired Dan Guaricci from Pret A Manger to serve as vice president of operations.

Of course, the fast-casual landscape is much different today than when ’Wichcraft launched in 2003. In the last 13 years, major fast casuals like Chipotle and Panera Bread have grown to thousands of locations, while hundreds of smaller concepts have evolved the fast-casual model into Fast Casual 2.0, which is characterized by more premium chef-driven menus, high-quality ingredients, alcohol service, and a dine-in atmosphere.

The last 13 years also saw the phenomena of Shake Shack, the New York City burger joint that launched in 2004 and has grown to nearly 60 locations across the U.S.

Colicchio and Shake Shack founder Meyer are close; the two were business partners in the fine-dining restaurant Gramercy Tavern, which they opened in New York in 1994, and Meyer regularly appears on “Top Chef.” Colicchio says he’s learned from Meyer how to be patient with growth.

“What [Meyer] does very well is he chooses not to grow quickly,” he says. “Anybody else would have opened a bunch more in their first year or second year, but he just took his time, kept tinkering with it, tried to figure it out, [and] went through various senior staff changes until he found the right formula and the right team, and then he started to grow.”

The right formula is what Colicchio, Ortuzar, and the rest of their team hope they’ve finally landed on with ’Wichcraft. The company has two additional leases signed for New York, and is looking for additional investment to help carry the concept into cities like Boston, Philadelphia, and Washington, D.C.

The market should be ripe for the chef-driven concept; fast casual has become a popular avenue for chefs across the country to get in front of a bigger audience. In fact, the category is such a popular subject among chefs that “Top Chef” hosted a fast-casual challenge last season, in which contestants were asked to conceptualize a fast-casual food stall with signature menu items.

Colicchio says fast casual is “the next frontier” for chefs, especially those who hope to expand their portfolios and establish more widespread influence in the food world.

“When you look at the creative things happening around the space, it comes out of the minds of people who are creative,” he says. “Often, those are the ones in the kitchen who are creating, not someone in a boardroom.”