Toppers is Talking Smack and Making Pizza, and Won't Stop Doing Either

The pizza chain drew the ire of Domino's in a recent campaign, but doesn't plan to back down.
Web Exclusives | August 9, 2018 | Bryan Reesman

Pizza mogul Scott Gittrich is one outspoken individual. A former Domino's employee, the Toppers Pizza founder and president has been chiding his old company in very direct advertising that challenges the quality and preparation of their food in an “Us Versus Them” print campaign. The marketing maneuver drew the ire of the pizza behemoth and rallied Toppers fans around their cause, Gittrich says.

“The last few weeks have been pretty good,” he says. “We liked the campaign. We've got good promotions and a bunch of sticks in the fire, so it's hard to kind of pin down what exactly is causing it. But it's good right now.”

Gittrich is no stranger to stirring the pot. In 2016, he ran a TV ad in which he encouraged an election year pizza debate with Domino's, Pizza Hut, and Papa John's. “Let the voters decide what real pizza is,” he proclaimed in the spot. “Do they want pizza crust made in a factory and delivered to stores once or twice a week, or do they want it made in a restaurant by prep cooks every single day from scratch?”

The “Us Versus Them” campaign juxtaposes a Domino's truck with the tagline, “Them. Dough fresh off the semi,” against an image of a Toppers worker with the tagline, “Us. Dough made fresh in-house daily.” Irked, Domino's sent them a cease and desist letter, but Gittrich wasn’t fazed.

The “Us Versus Them” campaign was originally conceived in the fall of 2017, he says. In the first quarter of 2018, Toppers launched a campaign about their competitors using frozen cheese. “Our cheese being fresh Mozzarella cheese from Wisconsin,” Gittrich says. “But we didn't call out a specific competitor. We had a graphic that we used that was somebody in a Domino's blue-colored hazmat suit holding up this bag of frozen cheese, juxtaposed with us with a fresh block of Mozzarella cheese. It really is a difference between us and the big chains. They used this modified cheese and buy it when it's cheap, and we spend a little bit more to do with the way that we do it.”

When the Toppers team was on deadline with that campaign, they felt uncomfortable calling out Domino's directly, but after that they decided to go for it. He says they just needed to ensure that they could do it legally and ethically. “We had decided on Domino's just because Domino's is on a good run,” Gittrich says. “They're probably our most direct competitor as far as being delivery experts. We decided that we would use them as the placeholder for all big chain pizza. I was just in a meeting yesterday where we've got the next iteration of things that are going to come down the pipe. It's real fun.” 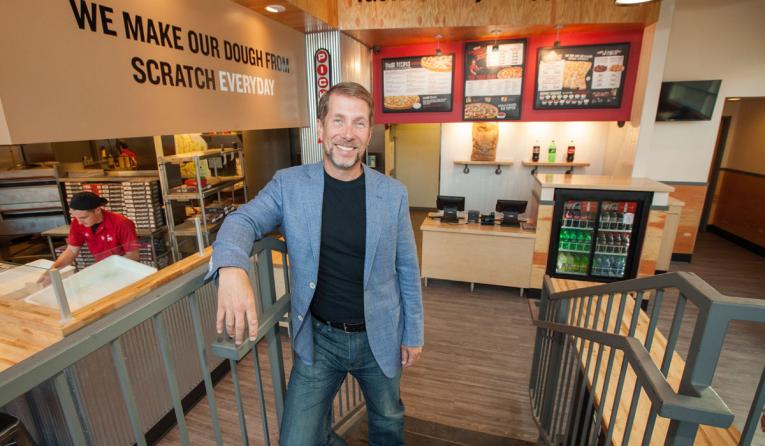 "We can be silly or bold or talk smack. This is the way we are in the restaurants. This is just the way we treat each other. Let's just be like that with our customers." — Scott Gittrich, Toppers Pizza founder and president.

Toppers certainly got Domino's attention. As mentioned, the famed pizza chain started rattling their legal sabers over the ad showing one of their trucks. “We actually took that photograph,” Gittrich says. “We own the photograph. We took the photograph. It was a truck sitting in front of one of their stores. We didn't PhotoShop it at all. We never had any doubt about the legality and ethics of it. There never was any question. I wouldn't have done it if I wasn't certain. We sure weren't going to outspend them in some legal fight, right? We were very confident that it was going to stand up before we ever ran it. We got a lot of great social out of it. It was the best social interaction that we've had with our customers and the public at large ever. It was fun. It was great.”

The Toppers founder notes that they have often sent out a challenge to competitors without a specific target. But he adds that even their longtime tagline, “Never Settle,” was meant as a “more in-your-face challenge to a customer: You're not going to eat their food, are you? You're not going to call them, are you? But that's part of being the little guy. We're the mavericks. That's just the air I've been breathing for a long, long time.”

Since day one, Gittrich and Toppers have been the little guy in a market segment dominated by major chains. While the competition was running TV ads, he was handing out fliers. He has always known they have to work harder, which has meant being bold—something that comes naturally to his team.

“We just feel like this is us,” he says. “We don't have to pretend to be somebody else. Since the early 2000s, we recognized we can just be ourselves. We can be silly or bold or talk smack. This is the way we are in the restaurants. This is just the way we treat each other. Let's just be like that with our customers. It's not a put on. If Pizza Hut did it, it would look like BS, a big chain feeding to the masses trying to look cool.”

The 27-year-old Toppers chain now totals 81 units located mostly in the Midwest—there are 36 alone in their home base of Wisconsin—and by 2023 plans to expand up to 250 units, which would inch the company closer in size to the larger chains it takes on. Gittrich sees Toppers having a distinct place in the market with their adherence to quality cheese and with their special, quirky toppings that include buffalo chicken, tater tots, nacho toppings, and buffalo chicken mac and cheese. 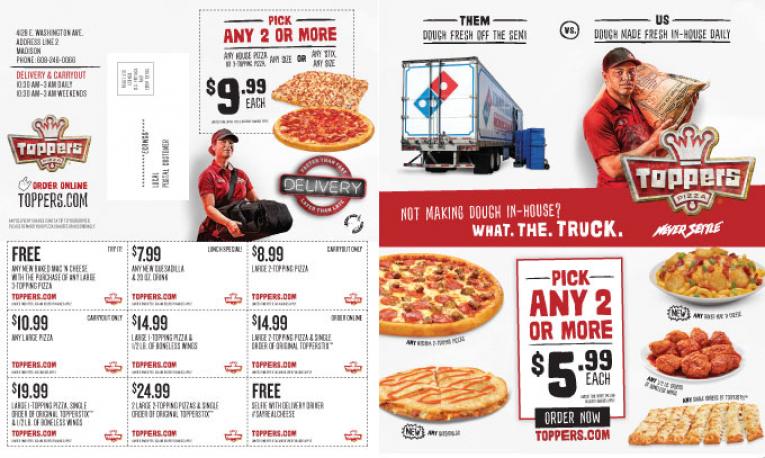 “We've just got a cooler, quirky, youthful menu,” he says. “What we do and how we do it is truly different. I think as long as we're true to that, let the chips fall where they may. I'm not worried now about when we have 2,000 restaurants, then what are people going to think about us? We can worry about that as we get there.”

A key buzzword with millennials is “fresh,” something that makes Toppers especially suited for that demographic. While conducting research three years ago, the company learned of the pride that their team members have in making things from scratch, hand cutting their veggies, and using more expensive and fresher ingredients. Yet their customer base did not share the awareness.

“We hadn't done a good job at teaching our customers about this real difference between us and the other guy,” Gittrich says. “We got credit for some other things—our personality that we are the little guy, kind of a maverick in some ways—but we didn't get credit for these real differences in our quality. So about three years ago we determined that we were going to start teaching our customers more about those differences that are valued at some level by people. We felt like we needed to play this better.” He adds, laughing, “Either that or we need to sell out and cheapen up our food. If we're going to spend the money and do it, then let's get credit for it. Holy smokes.”

Gittrich sees Toppers being in a good place, stating that there are not many people entering the pizza delivery and carryout segment. Rather, most of the growth in the pizza segment is now on the fast casual side. “Which to me is awesome—the growth part of new concepts is more focused on fast casual, and [quick service] is the strongest performance segment in restaurants right now,” he says. “Certainly overall, the pizza delivery and carry out segment is outperforming restaurants generally. There are segments that are stronger, but people still think of pizza as the great delivered food, and now everybody else is jumping on delivery.” 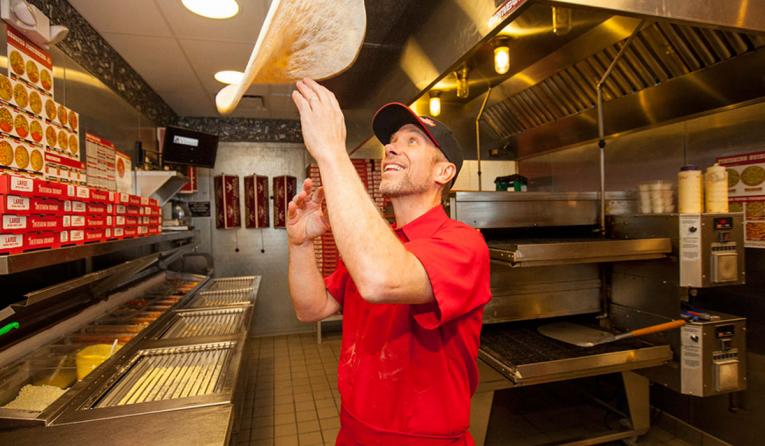 Toppers takes great pride in its dough, made in-house, every day.

He adds that his company does 55 percent of their sales on Toppers.com, which is competitive with Domino's, whose online take is a little higher. “We're way ahead of even the people like Panera or the big restaurant companies that are touting they're in technology,” Gittrich says. “They're not even touching our segment, they're not even close yet. We're in a pretty exciting segment, to tell you the truth. We're in the sweet spot of where restaurant growth is.”

As sales swell, Toppers will still provoke their competitors. He reveals that there have been conversations about adding Pizza Hut and Papa John's into their pizza war mix. Some would joke that the latter does not need any help lately in eliciting controversy. “We were just joking about that yesterday,” Gittrich says, good-naturedly.

The controversy that Toppers courts simply remains on a business level and never gets political. Gittrich believes that most people know that the bold Toppers ad campaigns are being done in jest. He notes that the difference about food quality is important, and he does not think his competitors “are bad people because they modify and freeze their cheese or whatever. It's just a different business model. We're having fun, making fun, and being somewhat silly, but we're also talking about a real difference that we think is important. But it's not life or death.”