The 20-year-old brand is going national—and it won't forget how it got here.
Web Exclusives | April 1, 2019 | Danny Klein

With barbecue, it’s never simple. Outside of Dickey’s and its 500-plus restaurants, and Famous Dave’s and Sonny’s on the full-service side, among other players, few brands cross state lines with any success. If they do, it’s often a regional cluster aimed at accomplishing two things: The brand can guard and oversee operations, especially cooking. Two, it builds out already proven markets. Because, perhaps more so than any other category in foodservice, barbecue is as contentious by county as it is revered.

In steps City Barbeque, a 20-year-old brand out of Columbus, Ohio. Partly owned by private-equity firm Freeman Spogli & Co., the chain has grown to 42 restaurants in seven states (Ohio, North Carolina, Michigan, Kentucky, Indiana, Illinois, and Georgia), with plans to add roughly 10 or so restaurants per year for the foreseeable future.

City Barbeque hasn’t had any trouble pleasing crowds, regardless of the zip code or backdrop, says founder Rick Malir. And that all comes back to the emerging brand’s roots.

Malir is a Kansas kid who grew up on a farm and gravitated to the KC style—rubbing meat with spices, slow-smoking, and serving with a thick tomato-based sauce. When he moved to Ohio 25 years ago, Malir linked up with competitive cooks and decided to toss aside preferences, however. “We said we’re going to make the best barbecue that we know how to make, regardless of the regions,” he says.

Pork shoulder? City Barbeque’s version might remind you of Western North Carolina. The brisket? “It just happens to look like Texas a bit,” Malir says. “We didn’t go out chasing anything. We just focused, day one, on serving the best product that we know how to do, and that our talents allowed us to serve.”

In January, City Barbeque brought on Mike Muldoon, former president and CEO of RMH Franchise Corp., to lead the brand through a “time of accelerated nationwide growth,” it said.

Muldoon, now the chain's chief operating officer and president, calls the whitespace ahead for City Barbeque “tremendous.” It’s one of those brands sitting at a sweet inflection point. It’s small enough to hint serious runway, but big enough to prove the current model works. “It just speaks to the upside the brand has,” Muldoon says. “Just look at the markets they’ve expanded in—it’s been very well received.”

Of the states City Barbeque has entered, four have five or fewer stores currently (Georgia, Illinois, Kentucky, and Michigan). Every market but Ohio has sub-10 locations. So there isn’t a saturated area yet. But there also isn’t one where a lone restaurant offers reason for doubt. 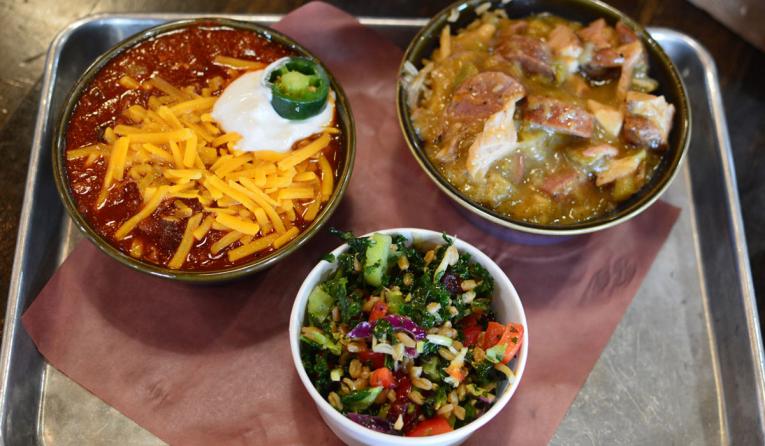 The Freeman, Spogli & Co. deal came in 2016 and kick started City Barbeque’s expansion into North Carolina, where it now has eight restaurants. Freeman is the same company that bought First Watch in 2011 and invested $45 million in El Pollo Loco 12 years ago. There were 26 City Barbeque locations at the time, meaning the concept has blossomed 61 percent in three years.

Malir, who famously started by brining chickens in his garage, says the company has stayed on a yearly 20–22 percent growth path. “But now we’re really at this inflection point of we’re not just a regional brand anymore,” he says. “We’re going to other areas, other parts of the country. But as we do that, we want to always maintain the scratch kitchen, the cooked on-site barbecue, the pitmasters that we have in each location.”

Muldoon was an ideal fit to get there, Malir says, because he’s not a growth for the sake of growth kind of executive. He bought into the culture at City Barbeque and everything that came along with it. A key part being the artisan approach and just how difficult that can be to maintain and sustain during expansion.

City Barbeque doesn’t franchise, and doesn’t plan to. Corporate controls all aspects of every opening. “I hate to say we’re very genuine because then it doesn’t sound like we’re genuine,” Malir says with a laugh. “But we go in and we instruct our teams, you are going to be part of this community. And that’s everything from the wage levels, from how we try to hire to how we pay our teams, all the way to the various charities and the organizations that we embrace. And we believe that’s the core of who we are.”

Insights platform TDn2K recently awarded City Barbeque its 2019 Best Practices Award in the fast-casual segment. The Columbus CEO has named the chain its best employer, in any industry, for three years running.

“My philosophy as a founder is technology should be a tool and only a tool to help us accommodate the guest. The guest absolutely comes first." — Rick Malir, City Barbeque's founder.

It’s the unchained growth formula at its purest. Scale up, methodically, in a way where the average customer has no idea your brand exists elsewhere. Yet, at the same time, the concept has the resources, tech, and funding to leverage the power of a multi-unit organization.

“We prefer to say we’re a lot of different local locations,” Malir says.

Here’s an example. Last December, the company launched a new online ordering system powered by industry juggernaut Olo. It also linked with customer platform Punchh to release a new and enhanced rewards app featuring improved mobile ordering. Guests could now order ahead, schedule pick-up, group order, and save favorite items for quick reordering. The platform features photos of every item and a rewards system that offers points for app purchases and also allows guests to refer friends for additional rewards. Some units are even experimenting with self-service kiosks.

But here’s how Malir talks about the infiltration of tech: “My philosophy as a founder is technology should be a tool and only a tool to help us accommodate the guest. The guest absolutely comes first,” he says. “And anything we do technology wise is going to be to help the guest. It’s not going to be for our benefit or to cut labor costs necessarily.”

The kiosk, for instance. Malir says City Barbeque looks at the option not as an employee replacement but as an option for those customers who know what they want and don’t feel like waiting. “Whenever we do a technological improvement in a restaurant it’s to enhance the experience, first and foremost,” he says. “And if it can’t do that, then we just don’t do it.”

Even the online ordering was a direct reflection of this mindset. Guests didn’t like it before, so City Barbeque fixed it. The loyalty program? It needed to get rid of punch cards.

“Technology is an enhancement, yes,” Malir says. “But it’s really just a fancier version of what we’ve always been doing.”

Muldoon says City Barbeque’s culture was one of the main reasons he joined. He’s on an early journey to visit every store and learn what makes the organization tick. “As we grow this brand what I think is going to make us successful, what I think has made City Barbeque successful as they’ve entered new markets, is that culture,” he says. “It truly is a point of differentiation.” 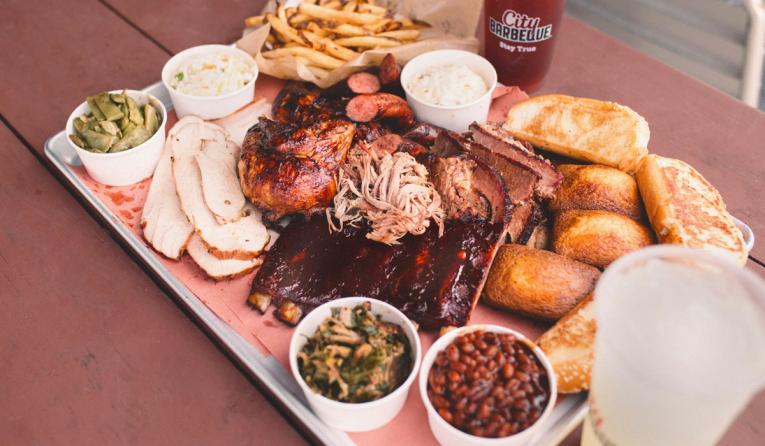 City Barbeque's online ordering is a big part of its business, but it doesn't take away from the human element.

Malir admits growing a chain with such defined culture and culinary principles takes time. The food doesn’t just show up frozen to be handed off. The process can’t be learned overnight. City Barbeque has food quality coaches and a robust R&D arm. He wouldn’t say how much exactly, only that the brand has “committed quite a bit of an investment in our training teams and organizations.”

“Because you can’t just open a restaurant and say, ‘OK, flip that switch, load the meat, and go home.’ There’s a lot to it,” Malir says. “And there’s a pretty good ramp-up period for us, whether it’s a cook or pit person to learn this system.”

Want to insult Malir? Just ask him where the commissary is.

“That just freaks me out,” he says. “As I say, our potato salad comes in the back as potatoes.”

Whether or not this kind of intensive training has helped inspire retention, Malir isn’t sure. He hasn’t really thought of it that way. The brand has troubling hiring the tightened labor market like anybody else, he says, but does report management and hourly turnover rates significantly below industry norms.

Culture tends to be one of those elastic words people snap back and forth without any substance. For Malir, there’s no internal definition at City Barbeque, just actions. “It’s my responsibility, and my position, and it’s going to be Mike’s as well, to exhibit the right behaviors every single day. Don’t deviate from that. Don’t push the gray areas. Behave in the right ways,” he says. “That comes back to treating everyone with respect.”

Malir hosts breakfast roundtables. He makes sure to include new employees on discussions. “You don’t lead behind a computer screen or on the cell phone,” he says. “You lead with face-to-face interaction. That’s how you lead and build teams.”

“Is it easy? Hell no,” he adds. “It’s really hard. And the easy way is to put together handbooks and a couple of video series and say this is how it is. But the hard way is how we’ve done it for 20 years.”

As far as growth goes, Malir says, City Barbeque knows it’s time to build another restaurant when the last one is successful. Expansion is a reward for doing the right things at current units.

“As long as we maintain that philosophy, we’re going to grow in a good, sustainable ways,” he says.

The private-equity investment helps, Malir says, since it’s a long-term play. Looking at the supply chain is going to be critical when picking new markets. They have very particular product guidelines and those need to be met before considering construction. “And then there’s the people development and where can we get the right teams put together,” he says. “Not just throwing darts on the map and saying oh, we’re going to open there because it looks hot.”

30 1st Street Unit 5
Bridgewater
MA
774-929-5234
Our coffee journey started with a Coffeehouse. It was always about the Coffee and (more)
Advertising & Marketing