He spent much of his time raising assets on behalf of financial institutions to invest and help make “rich people richer,” as he puts it. While it was financially beneficial, Weiss didn’t feel like he was making much of a difference in the world. He wanted to use his capital and energy on a more impactful venture.

That led him to Cafe Gratitude, a vegan chain based in the Bay Area. Before visiting one of the restaurants, Weiss didn’t know much about plant-based food, and knew even less about investing in restaurants. But when he arrived, all he saw was employees embracing a singular mission.

“The theme was, people that come to these restaurants are really part of something,” Weiss says. “They really believe that the way they eat and how they eat has an impact.”

That kickstarted the journey. Along the path, he connected with Dutch entrepreneurs Tony Martens and Maurits van de Ven, and co-founded Plantible Foods, a company that uses duckweed to extract a unique plant-based protein. Through that experience, Weiss gained an appreciation for just how much innovation was occurring in the space. It motivated him to build a brand around next generation plant-based meat.

He knew quick-service and burgers would be the platform, but the question remained—how could he shape a brand around it? Weiss wanted something that was endearing, but also iconic and symbolic. A figure that represented plants, the ecosystem, and the future. That question answered itself after many visits to Plantible’s farms where he noticed bees swarming the sunflower fields and being used at greenhouses.

Thus, Honeybee Burger was born, with help from co-founders Jeremy Adler, Brian Cikigil, and Ophelia Weiss, Adam’s wife. The first brick-and-mortar store launched in mid-2019 in Los Feliz. In March 2020, the new concept opened a virtual kitchen in West Los Angeles. A flagship location, which will be located in Central Los Angeles, is currently under construction.

“Now honey isn’t vegan, so there's a weird notion of well why would you do that?” Weiss says. “But people understand, and what it comes down to is the honeybee is super cute. It's a very good symbol for the health of our natural economy and agriculture. And I thought, 'This is it.’ And that's how we got the name.”

The menu features the Honeybee, a Beyond Meat or Impossible Meat cheeseburger made with house sauce, house-made onion jam, lettuce, tomato, a thin ribbon of onion, and house-made pickles. There’s also the Chick-A-Bee, a house-made fried “chicken" sandwich served in a   classic, buffalo, or Nashville Hot style, and the Sea Bee Burger, which is made with kelp, mushrooms, and other superfoods. Some other offerings include a breakfast burrito and sandwich, mac and cheese, sweet potato fries, and milkshakes.

Weiss says Honeybee was chosen by multiple well-known brands—and others not so known yet—to carry their plant-based products. Akua Kelp Burger, Atlas Monroe Fried Chicken, and Eclipse Ice Cream all selected Honeybee as their launch partner in L.A. The brand was also chosen by Oatly as one of the first companies to carry its soft-serve, dairy-free ice cream.

“And imagine that all this is with a tiny little store,” Weiss says. “They must think we're pretty cool. But what our customers have come to determine is that Honeybee brings really cool stuff—if not first, then early—vetted and packaged in a way that makes it amazing.”

After getting Honeybee off the ground, Weiss turned his attention to fueling the company for long-term growth. This is where his finance background came into play. During his career, he raised billions of dollars for hedge fund managers to deploy investment strategies. He did so with a range of investors, from ultra-high-network billionaires to family offices, pensions, endowments, and the like. So he could’ve called a couple of institutions or wealthy business-minded veterans to secure millions, but that wouldn’t have given Weiss what he wanted. What he really wanted to do was build an army—or a colony, to keep with the honeybee theme. 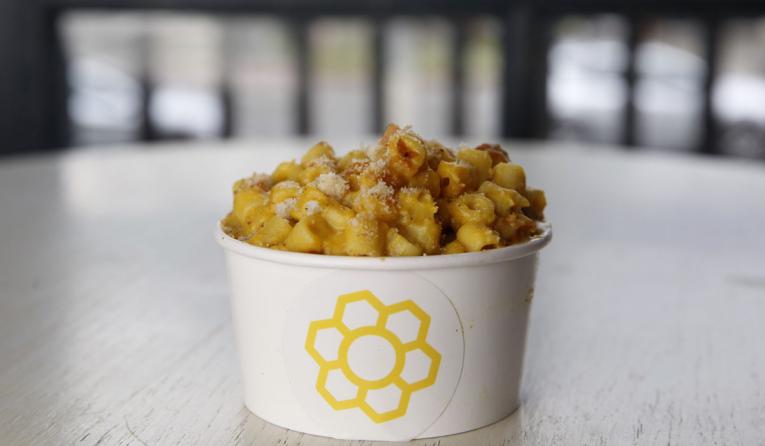 “People that eat vegan food are passionate. Yes, they're doing it for their health, but they do it for a reason,” Weiss says. “I can't think of another cuisine that people do that with, or food for that matter."

To that end, Weiss sought regulated crowdfunding, a process that allows a business to raise capital online through an SEC-registered intermediary. It lets any investor 18 and older buy into the private business.

Weiss selected Start Engine as the platform, and launched a six-month campaign on February 26. In six weeks, Honeybee raised $1.07 million from more than 1,400 people, with an average investment of $738. The pace exceeded his expectations as Honeybee became one of the fastest growing food and beverage brands on Start Engine. And yet, there’s still room for more. Previously, $1.07 million was the max limit, but that cap recently lifted to $5 million. Weiss hasn’t decided yet whether Honeybee will pursue more investors, but the opportunity is there.

The vast majority of capital is going toward development of new brick-and-mortar stores and cloud kitchens, as well as packaged goods, marketing, and public relations. Honeybee has a goal to have four to six stores open within 12 months and 12 to 20 open within the next 24 to 36 months.

Weiss says crowdfunding worked because Honeybee tapped into a demographic that cares about their future and wants a product that aligns with their lifestyle.

“They're thinking about their health, the planet, animal welfare, the use of water resources or carbon footprint, and so on,” Weiss says. “Sure, they’re investing in a fast-food brand—everyone understands [quick-service restaurants], everyone's seen the McDonald’s and they're all public and big and huge. So it's an understandable business model. But more to the point, you've got this passion, you've got this ability literally for somebody to say, ‘I can actually invest where my heart and soul and belief systems are.’”

The initial goal is to prove the concept and dominate Southern California, but Weiss says he wouldn’t consider Honeybee successful until it’s able to spread its mission from coast to coast.

The store design came from Ophelia Weiss, who left Wall Street to become a professional designer. Weiss describes the keystone color as a “really unique yellow,” which meshes with wood and floral wallpaper reminiscent of nature and agriculture. The brand intends to be quirky and funny, as seen by the chain’s logo—an 8-bit honeybee, similar to what you’d see with Super Mario Bros. on the Nintendo Entertainment System.

With the first store in Los Feliz, Honeybee took over a tiny burger restaurant with a main floor of about 500 square feet. Despite dining restrictions, civil unrest, a heat wave, and third-party delivery companies taking 30 percent commissions, the store managed to grow sales and profits throughout the pandemic. In September 2020, the restaurant decided to move after the landlord raised rent. Honeybee landed in Silver Lake, not too far from the original spot. Within 30 days, Honeybee was back at it.

“We didn't miss any trade days, but back making money, growing sales, and being profitable, so much so that we don't qualify for any grants, any second [Paycheck Protection Program loans],” Weiss says. “And in fact year-to-date, this quarter was an awesome quarter for us. The performance this past quarter has been beyond our expectations.”

The cloud kitchen, which opened right as the pandemic started, has managed to reach break even in spite of office districts shutting down. Honeybee is using the operating model to expand quickly and efficiently into markets. It’s also targeting second-generation locations to lower costs and accelerate development.

However, Weiss says landlords have reached out about white boxes that they’re willing to give for $100 to $250 per square foot.

“‘We love the vibe, we love the demo, there's nobody like you,’” says Weiss, recalling what landlords have told him. “And so we are contemplating, but to the extent that we do those, they have to be really, really compelling for us to want to do. But we're certainly looking at that possibility.”

Honeybee will also explore franchising. Harking back to his finance days, Weiss is an expert in how investors value portfolios. He knows that private equity and venture capitalist firms tend to buy brands and businesses that don’t overlap. The same is true for franchisees. That’s why Weiss and his partners shaped Honeybee in a way that’s hard to emulate—they infused it with a very specific appeal.

Those traits have proved compelling to franchisees so far. The chain has received about 30 solicitations from potential operators in major cities, such as Austin, Orlando, New York City, Seattle, and Chicago.

“There’s franchisees who do it as a living. They may have five or 10,” Weiss says. “And then there are those who say, ‘Oh my God, I could make a living and make an impact doing this. I want to move the needle, this is amazing.’ And that we think will increase the appeal not just long-term to a private equity buyer, but to franchisees. We're probably early on it, but we are building with the anticipation of being able to expand our brand through that in the next few years.”

So what’s on the immediate horizon? Honeybee’s upcoming flagship location will be 1,200 square feet with indoor and outdoor dining. The store will be 75 percent owned by Honeybee Burger, Inc. while the remaining 25 percent will go to legacy investors.

The near-term goal is to achieve a systemwide top line of $15 million to $20 million in three years. Even further into the future, Honeybee may look into a sale to a private equity firm, special acquisition company, or strategic buyer.

As the brand chases those dreams, it won’t lose sight of the bigger picture, says Weiss.

“People that eat vegan food are passionate. Yes, they're doing it for their health, but they do it for a reason,” Weiss says. “I can't think of another cuisine that people do that with, or food for that matter. But vegan and plant-based food attracts a very specific person who is thinking bigger.”