Wayback is About to Disrupt Delivery as We Know it

John Eucalitto, president and chief executive officer of Wayback Burgers, was attending a conference with all the major players in third-party delivery. One executive stood up and offered this status update: Soggy French fries are OK.

“I was devastated,” Eucalitto says. “That’s a tagline that’s been going around for a while now. And I’m thinking, ‘Geez. We’re doomed if that’s true.’”

Meanwhile, in New York City, a 5- by 10-foot car drove around for Wayback during a little-publicized pilot. When the three-month test ended, Wayback and the manufacturers behind the vehicle shared a similar take. This small, efficient car was able to push a ton of volume out of a very narrow space. But perhaps more notable, the moving venue served up the sizzling opposite of soggy fries.

The experience, as well as just the overall state of the delivery space, started spinning the wheels for Eucalitto and 161-unit Wayback. The solution is something, Eucalitto admits, garners a pretty skeptical response from people at first. “This guy is really crazy. I don’t even understand what he’s talking about. But by the end of the conversation, they’d be sitting up in their chairs saying, really? You think that will work?” Eucalitto says.

RELATED: Inside the blazing growth of Wayback Burgers.

Wayback is just now lifting the cap on a strategy it believes could seismically disrupt the delivery world. Dressed down, the company hooked up with a vendor who can pump out 5-foot-6 by 9-foot electric, mini food trucks. They arrive complete with refrigerators, freezers, griddles, fryers, and so forth—and run on electric and propane with a battery that can go about 80 miles per charge.

What happens here, though, that differs dramatically from the typical food truck is that these vehicles move to order and are accessed through an online marketplace Wayback hopes to grow. A guest, via an app created by Wayback for this platform (more on this shortly), can order a meal, delivered to their location by mini, branded truck. Once it arrives, the food is cooked to order. It’s made on the spot rather than the typical setup, where a driver is dispatched and the race for quality control is on, where every second ticked down threatens the restaurant’s standard. Or a parked food truck that waits for guests to line up.

Eucalitto says the mini-food truck idea was something that required Wayback to develop its own marketplace technology. This app, called “Viddl-it” in honor of the Beverly Hillbillies, is similar to the platforms of larger parties like DoorDash, UberEats, and GrubHub, where a user goes in and chooses the food group they’re looking for. In this case, the guest will be connected to a driver who accepts the order and is dispatched to the scene to make the meal.

“The most important part is the consumer will get a quality of product that they can’t get in any other delivery service,” Eucalitto says. 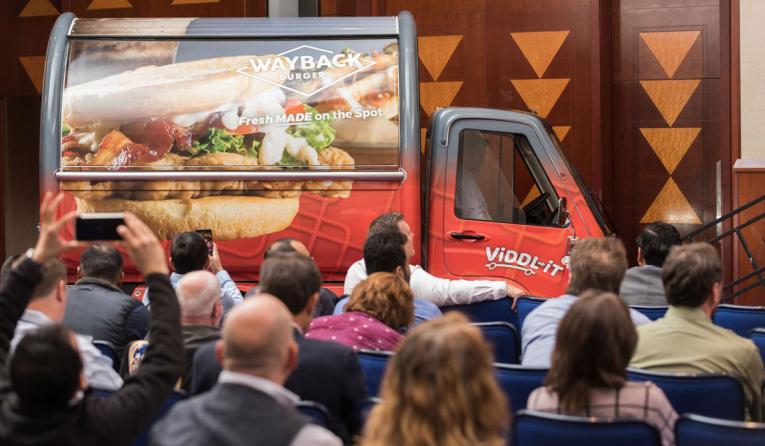 Wayback envisions the mini-food truck being licensed to other restaurant brands as well.

Wayback is just the beginning, too. The company actually has two trucks currently: A Wayback-branded vehicle and one for its sister barbecue concept, Uncle Willie’s. This is just a small window into the possibilities, Eucalitto says. Beyond having multiple trucks in multiple markets serving its guests, Wayback sees a licensing play at hand.

These trucks, served by the app, can be used by other concepts nationwide. A local taco joint that can’t stomach the delivery fee. An emerging micro-chain hoping to take control of the customer experience. That up-and-comer worried about packaging and introducing new guests to an inferior product. The truck also serves as a roaming billboard.

And here’s another area of differentiation from a typical food truck. Not every market is Los Angeles or Miami. In the vast majority of states, Eucalitto says, there’s a significant seasonal shift to a roaming restaurant’s business. Either it’s cold, snowing, and nobody is standing outside ordering. Or it’s 90 degrees and the experience of eating hot food is unpleasant. That’s where delivery has often ruled.

“How many days are [food trucks] actually available? Contrary to the restaurant, the restaurant when it’s raining, snowing, and cold or hot, the delivery is at its peak. So it’s kind of the inverse of what happens in the truck world right now. And I think we can take advantage of that also,” Eucalitto says.

Often the biggest complaint of delivery—it’s cold. That’s erased. Missing items? Hard to whiff when you’re walking to the window and picking up.

“And there’s not a whole heck of lot you can do when you’re using a third-party delivery company, because they’re on to the next one,” Eucalitto says. “Everyone suffers. The drivers get a bad rap. The restaurant gets a bad rap. Things happen. Now you have an ability to get it to the customer, give them everything they want, serve it piping hot.”

So how does Wayback expect to bring this to life? Firstly, the trucks run just $35,000–$50,000 apiece, which is significantly lower than buying a fully equipped food truck.

The trucks don’t take cash. Guests need to order from the app. So there’s no walking up to the window and placing an order. It’s more akin to private catering than a food truck, really.

Eucalitto doesn’t envision the trucks sitting or driving that often. They’re going to fulfill orders from location to location.

The technology is designed so if the operator received an order, say 3 miles away, and accepts it, and then two minutes later received another that’s a mile and a half away, it will redirect the driver to the closer order. “It’s smart technology that makes it the most efficient possible,” he says.

“It’s something we believe will solve those delivery problems that exist. There are people out there saying that third-party delivery is not going to be around in a couple of years. I don’t believe that to be true, because I think the marketplaces are so powerful for volume in the restaurants. It’s a real positive,” Eucalitto says. “If we turn on UberEats in one of our locations that they’re delivering in, within minutes you have orders coming in. And they’re not customers who would have been walking through the door because they’re not watching out for us to go live on UberEats. They’re UberEats or GrubHub customers.” 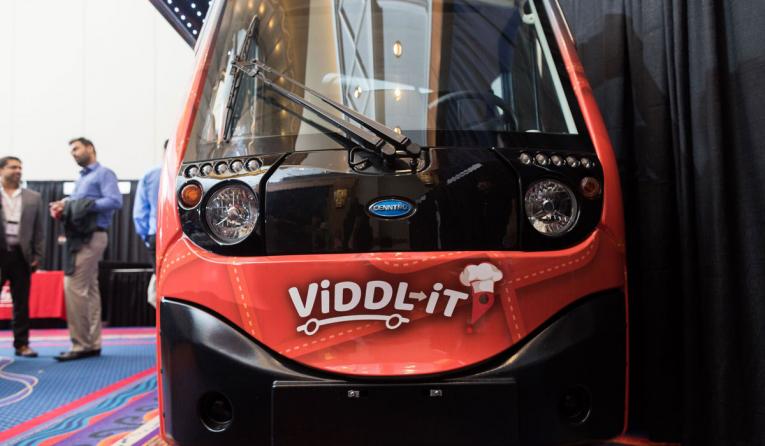 Wayback developed its own marketplace technology, Viddl-it, to harness the food trucks.

And, again, this is really where Wayback is playing. Not the notion that in-house or on-site delivery can cure what ails the aggregator space. These trucks will cater to the same kind of consumer—that guests who is platform loyal, not brand loyal. They’ll open Viddl-it and look for options. They won’t be seeking out Wayback necessarily.

The way the current arrangement is, where restaurants are absorbing delivery fees, Eucalitto believes the industry needs to eventually evolve out of it. Additionally, it’s very hard to win a customer over the first time via delivery when your burger and fries are sub-par.

This truck solution is something franchisees went wild for when Wayback unveiled it at a recent conference. Eucalitto spoke for an hour on the topic. “They really understand what the future should be, and we believe wholeheartedly that we should be able to do this forever,” he says. “You’ve had what we call up here the ‘roach coaches’ delivery food to places of employment or just out on the street. But we can do so much better.”

He sees not one or two trucks per location, but multiples of 10, 15, 20. And, as noted before, not necessarily within the same brand. This is the virtual restaurant craze served up with a driver at the wheel.

Eucalitto adds that it’s available to franchisees in Wayback’s system currently, but he’s not sure it will ever be mandated. In addition to the capital component, it requires a lot of attention to detail. There’s a maintenance factor. Cleanliness. You have to staff it. It will depend on the caliber of franchisee, and if it’s something they’re able and willing to add to their operational base.

"I’ll tell you, when that truck goes on the street I’ve never seen so much attention." — John Eucalitto, Wayback president.

On the licensing note, Eucalitto says the opportunity of moving forward with other brands and restaurant chains is endless. The ideal fit would be a concept that doesn’t offer an overly complex product where there’s a lot of in-truck assembly. It would work better, in other terms, for a burger, taco, or ethnic concept than it would for somebody who is sautéing sauces. Anything that’s prepared in advance and just needs to be cooked and plated is a sweet spot.

Wayback has driven around the two trucks in its home base of Cheshire, Connecticut already.

“I’ll tell you, when that truck goes on the street I’ve never seen so much attention,” Eucalitto says. People honk at the vehicle. They take pictures next to it. He even saw a Facebook post where the user asked, “What is this?” And responses of all kinds came flooding in.

It’s branded on the back for the restaurant and there’s a small section on the bottom that advertises the app. The front and cab itself are really dedicated to the app. “Because we do need to develop that marketplace,” he says. “That way, if a customer tries to order a burger and they want to get a Wayback from there but the truck is not available, they’ll have the opportunity to order something else, whether it’s Uncle Willies or any other products that are out there as long as the trucks are available.”

Wayback has driven the truck to nearby offices, pulled over, and just started cooking. People crowd around and look on wonderingly. But then the food arrives.

“No more soggy French fries,” Eucalitto says. “And that makes all the difference in the world.”