How the burger chain is building a loyal following with a brand voice all its own.
Web Exclusives | June 18, 2018 | Kevin Hardy

Wendy's social media personality is legendary. Is it driving sales? It's definitely creating a following.

There was no closed-door meeting at Wendy’s headquarters where executives decided to reengineer the brand’s marketing strategy.

Rather, executives say, recent high-profile productions like a Super Bowl commercial that directly called out competitor McDonald’s and the unique “We Beefin?” mixtape represent more of an evolution for the voice of the burger brand birthed by Dave Thomas.

“What I would say is Wendy’s has always been about this,” says Carl Loredo, VP of brand and advertising. “Going back to 1969, we’ve always been different. Candidly, that’s why we’ve always had square burgers made with fresh, never frozen beef. It’s why we have a Frosty, not a milkshake.”

Loredo pointed out that even early Wendy’s television commercials took a unique approach with their “Where’s the beef?” catchphrase: “There was always this tone, right? It was about confidence, it was about fun, and in a lot of ways being positive.”

At the heart of the burger chain’s branding strategy is one central tenet: the people at Wendy’s are serious about the food, but not themselves. Loredo says the roots of that approach are traced back to the portrayal of Wendy herself, a lighthearted, pigtailed kid.

Over the years, Wendy’s has worked to reimagine and evolve its advertising message to new platforms, particularly on social media. But it has also shown a willingness to experiment and push the envelope.

Take the mixtape, a five-song production released in March on iTunes and Spotify. It used the hip hop format to lob insults at Burger King and McDonald’s with tracks like “Rest in Grease,” “Holding it Down” and “Clownin’.”

“I think what’s important for us and our team is to try to find new and innovative ways to continue to tell our story,” Loredo says. “It’s a very, very, very cluttered marketplace out there as you think of all the messages that are coming to us ... We have to find ways to break through.”

Wendy’s has also become well-known for its snarky voice on Twitter. It rolls out LTO promotions and product spotlights that are the bread and butter of any brand’s social media strategy. But Wendy’s is also unabashed in calling out the competition and roasting other users, much to the delight of its more than 2.5 million followers.

Its Twitter presence has made Wendy’s not just a more-fun-than-usual braded account, but a destination in some ways: “We believe that people are coming to us today on social to be entertained. That’s the commitment we have to deliver on.”

Much of that voice is traced back to the medium itself: Loredo says Twitter allows for a more playful presence. The social media team—manned by both an in-house team and agency workers—must think about the best ways to express the Wendy’s voice on each individual platform.

While a savage roast or snarky call out to the competition might not directly result in more restaurant visits, Loredo says it does help build a loyal following. And it allows the company to continually showcase how it’s different, whether it’s with a playful voice or with the burgers and fries it serves in stores. That idea has remained a central thread in its aggressive posture toward burger behemoth McDonald’s. 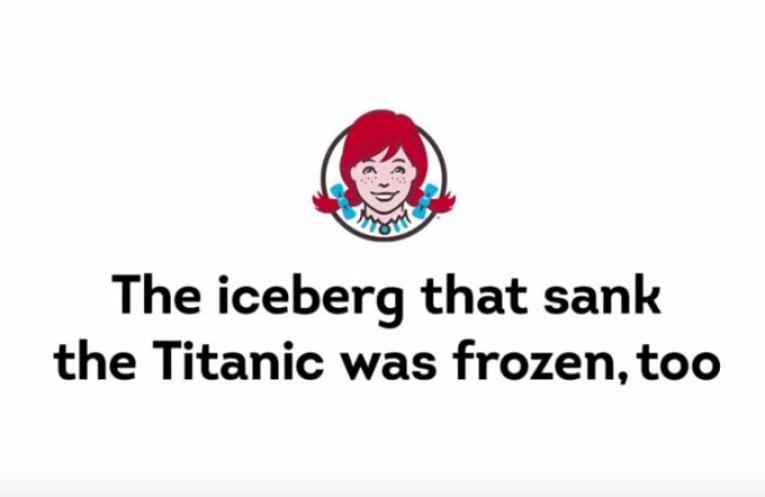 In January, Wendy’s Super Bowl commercial began by pointing to what it called a “not so hidden gem” on the McDonald’s website, which says the beef is flash frozen to seal in fresh flavor (McDonald’s has since rolled out fresh beef with all its Quarter Pounder and Signature Crafted Recipe products).

“The iceberg that sank the Titanic was frozen, too,” the Wendy’s commercial says, “(just sayin’).”

While the TV spot raised eyebrows across the country, Loredo says it’s less about signaling out McDonald’s than it is about highlighting what makes his company different.

“A big component for us is making sure our consumers do know there’s a difference There’s a choice you’re making,” he says. “McDonald’s become an opportunity for us to share the difference. This isn’t about us versus McDonald’s.”

In the sea of branded accounts, Wendy’s definitely stands out, particularly on Twitter, which tends to feature more text-heavy content than other visually driven social platforms.

“They're interesting because they have this edgy, snarky, humorous presence on Twitter especially,” says Jonathan Gardner, VP of marketing at ShareIQ, a software platform that helps brands optimize social media content. “They're one of the [quick-service] brands that definitely does a lot of it. And a lot of brands are trying to copy that and follow the leader.”

Even so, the social approach at Wendy’s varies greatly between platforms. While it’s known for having a fun, snarky tone on Twitter, Wendy’s acts much more traditional on Facebook, Instagram, and Pinterest, Gardner says.

“It’s almost as if their Twitter is managed by a different team or has a different strategy or objective,” he says. “It’s almost like the marketing team said Twitter is where we're going to have fun and everywhere else is going to be traditional … Maybe it's as simple as different people owning different channels.”

And this shows in the numbers: Domino’s, for example, earns 11 times more engagement on Instagram than Wendy’s, he says. While it’s difficult to determine the exact relationship between social media engagement and sales, Gardner says it’s an important piece of building loyalty and traffic.

It’s probably easier to build a unique voice on text-heavy Twitter. But Gardner says Wendy’s could do a lot more to optimize its presence on Facebook, Instagram, and other platforms. Many other branded accounts win big with fun gifs, pictures of cute puppies and resharing customer posts.

“It’s harder to be snarky or edgy on the visual platforms, but I don’t know if that translates to let’s be kind of dull on the visual platforms. I don’t know why a brand would choose not to optimize all their platforms,” he says. “When you have a huge brand like Wendy’s, they’re going to have a huge mix of mediums … Earned media and social media is important. It’s a moving target. There’s always more that brands can be doing to optimize and perform better.”