Food trucks and C-stores are currently in high demand, but a bigger prototype with an expanded menu is on the way.

When it comes to growth, Wetzel’s Pretzels CEO Jenn Schuler and her team live by the mantra, “It’s time to bring pretzels to the people.”

There’s good reason for this confidence. With the Delta variant spreading, unemployment dollars fading away, and kids returning to school, the brand expected sales and traffic to soften in September, but quite the opposite happened. Driven by increases in average check, visits remained strong and same-store sales rose roughly 25 percent compared to 2019.

Schuler attributes this trajectory to an ongoing shift in consumers’ eating habits, fueled by rising prices and labor shortages impacting quality of service. To illustrate the CEO’s point, the index for food away from home rose 4.7 percent year-over-year in August, according to the Bureau of Labor Statistics, with menu prices at quick-service establishments increasing 6.9 percent and full-service meals lifting 4.9 percent. As for staffing issues, food and drink establishments remain 1 million employees shy of their total workforce in February 2020, and the removal of enhanced unemployment benefits doesn’t appear to be have a noticeable effect.

Amid those macroeconomic factors, Wetzel’s fulfills customers’ need for quick mini meals and a solid value proposition, according to Schuler. The chain has seen a “greater shift than ever” into products that have protein, and benefited from more items per order, which is part of a larger trend across the snacking segment. Market researcher The Hartman Group found in a recent study that guests are consuming more snacks per sitting across all dayparts compared to pre-COVID, including early morning (2.5 per occasion to 3.4), morning (2.1 to 3.1), afternoon (2.1 to 2.5), and after-dinner (2.2 to 2.8).

“I think consumers have built new eating habits that includes a lot more snacking, mini meals, meals on the go, and so Wetzel’s really fits that consumer need,” Schuler says. “And I think as a result, my expectation into October is probably more bullish than ever in terms of I think our same-store sales of 20-30 percent increase is going to hold into the rest of the year.”

In addition to value, Schuler believes the desire for comfort and familiarity has played a significant role. A survey from the National Restaurant Association found 38 percent of on-premises customers and 33 percent of off-premises guests were more likely to choose one restaurant over another if comfort food was available. Another study from OnePoll and Farm Rich discovered that out of 2,000 respondents, 66 percent turned to childhood favorites during the pandemic.

“I think the pretzel fits in for folks,” Schuler says. “It's very comforting. Hot fresh bread, a sense of nostalgia ties you back to something in your youth, whether that was the Wetzel’s you had at the mall or one you had at an amusement park or state fair.” 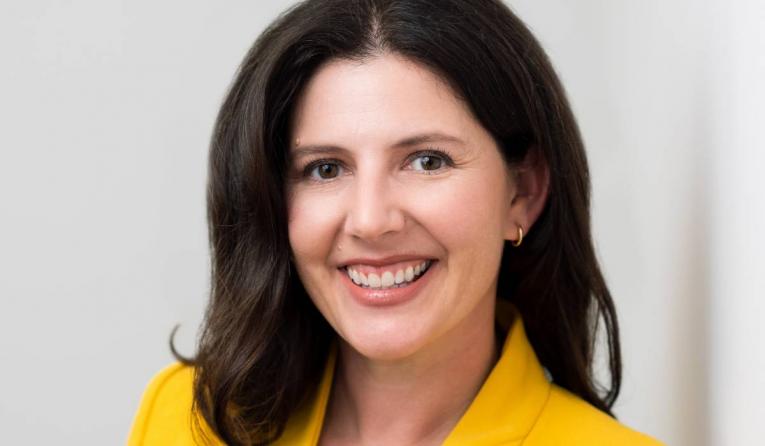 CEO Jenn Schuler says Wetzel's Pretzels wants to create a bigger version of itself that uses pretzels as the centerpiece, similar to how Chipotle grew from burritos and Chick-fil-A expanded upon its hand-breaded chicken.

With its snack-based menu growing in popularity, the 350-unit Wetzel’s has sought to widen its accessibility. The chain expects to open 30 stores by years-end, although Schuler says that figure could've been as large as 50 if it weren't for delays caused by supply chain, construction, and labor.

Food trucks—which the brand only dabbled in pre-COVID—have risen in demand among franchisees. The chain oversees roughly 12 food trucks between those already on the road and ones scheduled to hit the pavement this year.

The other major growth lever has been convenience stores. Wetzel’s recently announced a new opportunity in which c-store operators can open the pretzel brand inside Phillips 66, Conoco, and 76 branded locations. Schuler describes newer c-stores as a “different breed” where the food offerings are higher-end, varied, and fresh. She adds that consumers are now using these locations for quick, convenient meals, which perfectly fits with Wetzel’s target demographic.

The first franchisees under the new store-within-a-store concept were Southern California operators Ron Reger and Alfred Daher, who have decades of experience operating gas stations and c-stores. The duo opened three Wetzel’s within 10 months, and two more are on the way.

“Like your family on the go that's getting gas before you're off to the soccer tournament,” Schuler says. “Wouldn't it be great if you could get your kids some dog bites—the perfect quick snack as you head in between soccer drop off and dance class or whatever it is that's going on for your family. It’s the right intersection between what the consumer needs and wants and how they're already using our brand. And then what Phillips 66 is doing in terms of really upgrading their food offerings because they see how the consumers are using their c-stores, as well. It’s a really good fit.”

In addition to shrinking its core model to fit inside food trucks, c-stores, travel centers, and Walmart locations, Wetzel’s is working on a bigger version of itself with an expanded menu.

“We really spent time in our own twisted kitchen, which is what we refer to as our culinary innovation lab, thinking about, OK, what if pretzel is the centerpiece?” 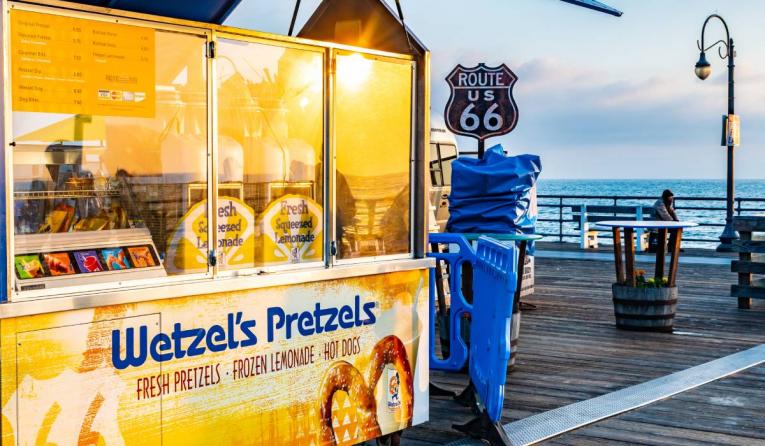 There are roughly a dozen food trucks open and in development.

The goal is to expand beyond typical kiosk stands inside shopping malls, which have limited whitespace opportunities. In August 2020, Coresight Research estimated that one-fourth of the U.S.’s 1,000 malls will shut down in the next three to five years. Additionally, Millionacres, a website producing content on real estate and financing, reported that malls lost an average of 60 percent in real estate value in 2020.

Despite the gloomy forecast, Schuler still believes there are good, strong malls where Wetzel’s can open locations and perform significantly above its AUV. She knows this because the brand has done it several times this year. For instance, the concept debuted two locations in New Jersey’s 3-million-square-foot American Dream Mall, and those stores are doubling average sales.

“There's a lot to the online convenience, and I wouldn't argue that that's going away,” Shuler says. “I think there will continue to be more of it. But I think there’s a place for both. Finding the right malls that are destinations and experiential entertainment venues—Wetzel’s is definitely going to fit there.”

Co-branding is another form of growth usually implemented by snacking brands—think Great American Cookies/Marble Slab Creamery and Auntie Anne’s/Jamba—but Wetzel’s hasn’t dived too deep into that strategy. That’s not to say it’s completely nonexistent, however. The brand recently partnered with Utah-based Thirst Drinks to open a food truck, a venture that should provide plenty of learning opportunities for Wetzel’s other food trucks, especially with social media outreach, Schuler says.

Those type of joint efforts are worthwhile for certain occasions, but the CEO doesn’t see it as a core part of the brand’s national expansion program.

“I think we have really cultivated a very clear brand voice that's all about our California roots—hip and playful and fun and sometimes irreverent,” Schuler says. “So trying to get matched up with something that's complementary products and the right voice is really important for us. So that can be a challenge.”

Wetzel’s growth strategy will in part be guided by CMO Kim Freer, who joined the company in July. The industry veteran spent six years at Blaze Pizza, where she led brand marketing for a concept once labeled as the “fastest-growing restaurant chain ever.” Schuler says much of the work Freer did with brand development and local store marketing drove strong performances, and those strategies will be directly transferable to Wetzel’s as it thinks about expanding into streetside units, which require different marketing tools than mall-based stores or food trucks.

Wetzel’s positions itself as a place where employees like Freer can bring their passion and expertise and make an impact, Shuler says. Company growth starts with the individual and then spans outward.

That’s ultimately how the brand reached a point where it was ready to once again bring pretzels to the people.