Which Wich Founders Have Big Plans for Paciugo

The gelato franchise is toying with a new design, product line, and much more in 2019.
Web Exclusives | February 5, 2019 | Danny Klein

Paciugo could open 10 stores this year, building on its 32-restaurant footprint.

When the opportunity to acquire Paciugo, the nation’s largest artisanal gelato chain, arrived in 2018, the team behind Which Wich jumped at the chance. Firstly, they were fans of the fellow Dallas-based brand. But from a business perspective, the 19-year-old, 32-unit chain was just scraping its potential. And many of those qualities applied directly to the company’s current footprint.

Sinelli Concepts International bought the brand in August for an undisclosed amount. Founded by Jeff Sinelli in 1997, the company has launched Which Wich (2003), Burguesa Burger (2007), and Genghis Grill (1997), and also acquired and sold Submarina of California in 2017. There are currently 500-plus restaurants in Sinelli Concepts’ portfolio (the majority belonging to 350-unit Which Wich).

Paciugo—an Italian phrase that translates to “messy concoction”—represented a very different avenue for the company. That was part of the lure. Hala Habal, VP of corporate communications, says Paciugo allows Sinelli Concepts to grow its dayparts. This extends from co-branded possibilities with Which Wich to the reality that a gelato franchise doesn’t peak at lunch like a sandwich one does.

Habal says the company is actively seeking to develop and grow its franchise base, both on its own and with co-branded stores. Jeremy Cook, Paciugo brand manager, adds that 2018 was “really about learning and understanding the business model itself, and making it better.” In 2019, the company has big goals, he says, for awarding franchises and opening new stores. An early target is 10 locations for the calendar year, with a ramp up expected in 2020 and beyond. That would take the brand up nearly 30 percent.

“One thing about Paciugo’s footprint is it’s just so flexible,” Habal says. “We’ve got standalone traditional locations. We’ve got them in malls. In kiosks. In food courts. We’ve got them right outside of movie theaters. The nontraditional opportunities for malls and hospitals and campuses and places like that, airports, is huge.”

And Paciugo currently resides in just nine states. Additionally, it has a robust CPG business that sold more than 75,000 take-home packs in 2017 across 25 retail outlets. Currently, all but one of the stores are franchised. There’s a reason one corporate location remains, however. It’s the genesis of what’s really the biggest source of runway for the brand. 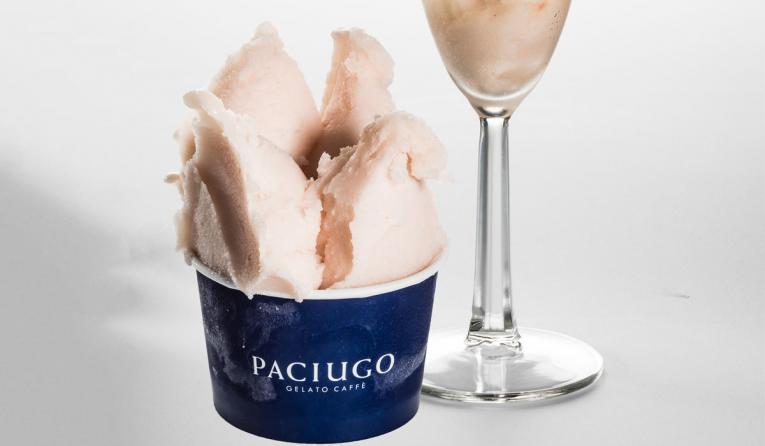 Bring you children for gelato, have a glass of wine. Paciugo thinks it can be a winning combination.

EVP and co-founder of Sinelli Concepts, Courtney Sinelli, says they immediately realized Paciugo’s potential to be “so much more than gelato.” This year, the company is renovating the corporate Dallas location to debut a next-generation version of Paciugo that could redefine how it grows and penetrates markets nationwide.

They applied for a liquor license and expect to add wine and perhaps Champagne. The goal being a more authentic, European café capable of serving multiple occasions. Also, the corporate Paciugo will dive deeper into coffee drinks as it looks to become an all-day destination.

Another feature Sinelli is excited about: an elevated, alcohol-infused line of gelato flavors. In December, the company’s VP of R&D and production, Diego Comparin, known internally as the “mad scientist of gelato,” created a Peach Bellini Sorbet that paired well with Prosecco and other sparkling wines. But these new options would actually have alcohol in them. Sinelli says the name is still being decided, but an “after-dark” line of gelatos speaks to a broader image.

“It seemed like there was just huge potential to take this to another level,” she says. “That was definitely an attractive part of Paciugo before we ever approached [buying it]. We were looking at the opportunity.”

A bigger emphasis on coffee is a natural step, Cook adds. The company doesn’t need to ask franchisees to bring in crates of new equipment. And having a gelato chain that presents a “third-place” vibe, like Starbucks, where people sit around as though its a sidewalk café in Europe, is something the marketplace lacks, he says. “It’s a niche right now where there isn’t anything else out there like this,” Cook says. “I think we can get on the front end right now and do something nobody else is doing—on a large scale with our existing footprint.”

“We like to say it’s an adult concept, but kid friendly.”

Sinelli envisions a place where people can go after dinner, and you’re not just bringing your children to get gelato. “You can also have a glass of wine and enjoy something yourself,” she says. 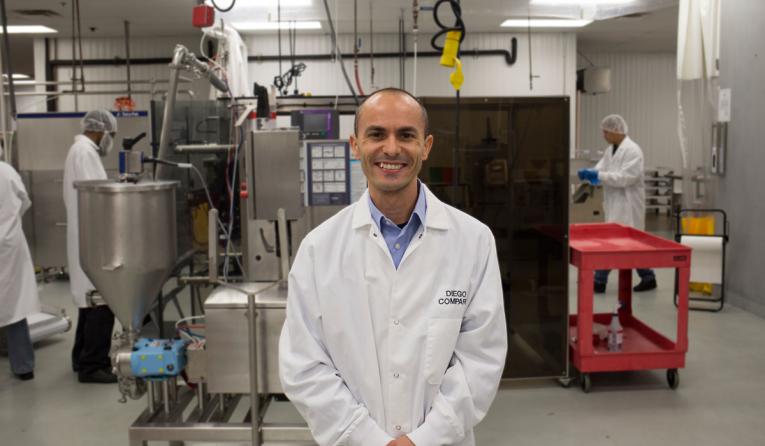 In Europe it’s not uncommon to see gelato served at breakfast. Sinelli sees no reason to miss that daypart, either. “There’s something for everyone,” she says.

The co-branding element has been an easy addition so far and is likely to dominate Paciugo’s early growth in 2019, Cook says. It adds a sales generator to existing Which Wich stores and opens the door for product innovation as well as new customer experiences. Things like gelato shakes.

In those locations, Paciugo folds into Which Wich but stands on its own. There are menu boards, dipping cabinets, signage, tiles, and other design features that represent the chain. When you walk in, Cook says, you notice Which Wich first. “But you definitely see the dipping cabinet with all the fresh gelato. It’s separate but at the same time it complements each other,” he says.

Paciugo, as Habal noted before, isn’t going to come across a space it can’t fit into. The traditional store can thrive in non-traditional venues, no matter the square footage. While it’s still a work in progress, the 2.0 unit, which will experiment with some food options as well, presents a larger footprint that flexes into different real estate.

She says the company received franchisee interest since the purchase, including overseas. They’re looking for operators who fit into the culture as much as the financial requirements. “It’s hospitality at the end of the day,” Habal says. “And generally people aren’t grumpy when they’re happy eating gelato. It really is a very happy culture.”

Comparin is a good example. Growing up, his father owned a gelato shop in Italy. Paciugo imports a lot of its product directly and makes gelato by hand daily.

“We all learn a lot from him every day,” Sinelli adds. “He’s a dream to work with, and he can do anything.” In October, Comparin won the Dallas stop of Gelato Festival America’s competition with his Texas Pecan Sea Salt Caramel flavor. He moves on to compete in the North American semifinals for a chance to be one of three to represent the country at the Gelato Festival World Masters in 2021 in Italy.

On top of the culinary changes and core strengths, Cook says, the company is working on shoring up its manufacturing as it looks to take “2019 to a whole new level.”

Paciugo is also considering featuring its product in local restaurants and pushing its upcoming alcohol-infused line into retail.

“We have a lot going on right now, and we’re preparing for it,” Cook says. “We’re just really excited to see what’s in store.”