Drive-thru mix of sales has grown from 65 percent to the mid-90s.

Like other West Coast brands, Wienerschnitzel started feeling the pandemic before it hit the rest of the country, says Rusty Bills, vice president of operations.

The Bay Area was one of the first major markets to institute a lockdown and curfews. Soon, that trickled to Southern California. At the time, everyone was put on high alarm. Customers were discouraged from venturing out, and in response, sales tanked. Halfway through March and a couple of weeks into April, Wienerschnitzel was in “scared mode,” Bills says.

That narrative wouldn’t last long, however. As Bills recalls, Californians proved their adaptability. They began seeking brands that could deliver an effective off-premises program, and no one was better suited than the 340-unit Wienerschnitzel, which has operated drive-thru stores for almost 60 years.

The chain has seen sales rise 22 percent since the pandemic arrived, including more than 20 percent in November. September and October hovered in the 24 to 26 percent range. Half the system experienced record growth, a notable accomplishment given the decades-long history.

Simply, Wienerschnitzel was built for this era even back in 1961. The original “A” frame features a drive-thru where cars move through the building. The brand still has more than 90 of those locations; one-third of the system doesn’t have a dining room.

Those sales were accomplished without mobile ordering, which will be tested in the San Diego market and tentatively finalized for the whole system by the end of Q1.

“We're very pleased with revenue coming in through the year and expect to finish out the year the same,” Bills says. “I think when you're looking at a small, privately held brand of 340 plus stores with 130 that never even had a dining room, we were built for drive-thru success.”

Before COVID, drive-thru mixed about 65 percent, while dine-in and takeout represented 32 percent and delivery carved out 3 percent. For the past several months, drive-thru has sky-rocketed to the mid-90s. Elevated volumes were welcomed, Bill says, but have presented challenges. For example, some stores built in the 60s and 70s are right off the street, which makes it difficult to serve drive-thru stacks of two to four cars.

As a result, there’s been much focus on improving the channel’s efficiency. The first order of business was helping customers order more effectively by placing windproof signs displaying core menu items and combo meals ahead of the drive-thru board. Another step was ensuring everyone was current with headsets so when they hear an order, they’re immediately preparing items instead of waiting for the send button on the POS system.

Wienerschnitzel also has a system in which workers will take payments and bring orders to the second, third, or fourth car in line. Regarding menu items, the brand witnessed higher sales from its shake and drink program. To improve throughput, Wienerschnitzel removed whipped cream and an additional garnish because the shakes required about 30 seconds.

“Because if you have a mistake in the dining room, you go, ‘You know what I asked for no onions in my Chicago Dog. Oh, no problem,’” Bills says. “But now you're going home. You're feeding your family of five, 10 minutes away. You didn't get what you asked for. That creates a cycle of non-satisfied guests. So those are the things we work on behind the scenes—honing in on what we already do well. I think that's what's going to carry us because we've been good at a lot of these sectors. And now my job is to make sure that we’re great. And I believe that we have become that and will continue to do so.” 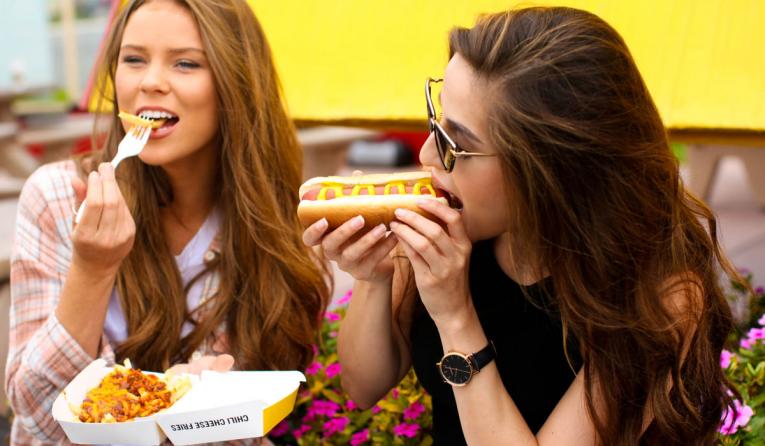 More than 70 percent of Wienerschnitzel's system is in California.

Some drive-thru improvements date back to before the crisis began. A year ago, Wienerschnitzel finalized a training program to become a drive-thru employee. The brand even gives an award for those who graduate to that level.

“We were almost ramping up for elevating our drive-thru to another level prior to [the pandemic] happening,” Bills says. “So I'm extremely proud of being in position on that.  Being in the company for 14 years, I'm grateful that we didn't have to stop and throw everything away and start over. We were already there.”

Because of rising drive-thru sales and little reliance on indoor dining, Wienerschnitzel wasn’t fazed by capacity restrictions other than the first lockdown. More than 70 percent of the system is in California, a state shuttering on-premises dining, both inside and outdoors. Although that seriously affects many brands, especially full-service operators, the reality is Wienerschnitzel benefited during periods of closed dining rooms.

The growth in business led to an increased consumer base. According to internal surveys, 8 to 10 percent of customers during the pandemic have been new users. Wienerschnitzel also saw once-a-month guests turn into twice a month. Bills attributes that to a fun and quirky marketing program, the closure of other restaurants, and the company’s ability to keep employees and customers safe.

“We were very proactive at the onset of this to make sure our crews have the plexiglass,” Bills says. “We were going to Home Depot and Lowe’s before it was trendy, and we were cutting plexiglass. I had my field team go out and place it on the windows and the walkup counters at our restaurants for the franchisees. We wanted them to feel safe. We wanted our customers to feel good. We had to put gloves on California's employees, which is so challenging because they've never been required. I think that's all helped gain traction with new guests.”

The rest of the industry swiftly realized the effectiveness of drive-thrus as seen by many brands creating makeshift routes with traffic cones and other materials. Several fast-casuals, like Chipotle, Noodles & Company, and Qdoba, are ratcheting up drive-thru development to meet mounting demand.

So that begs the question, how much more competitive will real estate become with more brands jostling for land that caters to drive-thru? Bills says Wienerschnitzel doesn’t even attempt to fight with the bigger companies when it comes to real estate. Instead, the brand pivoted and looked at nontraditional areas that fit its recent model, which is only 800 square feet and features a drive-thru and walkup counter. The Wienerschnitzel executive notes those can be placed on 15,000- to-18,000-square-foot parcels, which he says is unheard of because most quick-service brands typically need around 40,000 square feet.

Wienerschnitzel found success with pads in front of anchors like Lowe’s and Walmart where space is shared and overflow parking is utilized.

“A lot of people were very open and flexible to endcaps. We’re flexible to freestanding, and we’re flexible to conversions,” Bills says. “We’ve had four conversions open up this year from whatever existing business it was. We go in there and redo the kitchen, we redo the outside, and those were very flexible for us. And it's less expensive for the franchise community, as well.”

Bills says that instead of expecting to fall off a cliff, Wienerschnitzel is moving forward with the mindset successes will endure and the industry won’t shift back to how it operated pre-COVID.

The belief is franchisee profitability will continue—that’s the basis of every decision made at Wienerschnitzel.

“That's not just a quirky statement,” Bills says. "That’s something that we do. Our increased sales have been phenomenal, but we're most proud of them being primarily full-priced, high profitable transactions. And that's what drives our franchisees into that trust factor with us because they know that we're looking out for them.”