Will Focus Brands Make the Next Big M&A Move?

The multi-brand platform is looking for a concept between 150–900 units.

Coming out of the pandemic’s early days, Focus Brands—equipped with a strong balance sheet—saw an industry ripe for M&A, CFO Mike Dixon says.

However, as 2021 proved, a lot of other brands felt the same way.

Jim Holthouser, CEO of Focus, the parent of Moe’s, Jamba, Auntie Anne’s, Cinnabon, Carvel, Schlotzsky’s, and McAlister’s, believes consolidation in the food and beverage space is only going to gain momentum. His prediction is that in the next decade or so, there will be the emergence of five to 10 mega players.

“There’s power in a portfolio because of its scale,” Holthouser says. “Consolidation is not going to go away. I think if nothing else, it's just going to accelerate just simply because, how do you afford the tools we're talking about or the world-class supply chains or anything else that you need to compete?”

Focus promises to be an important part of that M&A future, especially with the backing of private equity group Roark Capital—the same company that oversees Sonic and Arby’s parent Inspire Brands and Hardee’s and Carl’s Jr. umbrella company CKE Restaurants.

CFO Mike Dixon says the company has been active since its $200 million purchase of Jamba in 2018.

“It's a very competitive market to buy something, but between ourselves internally, with Roark’s help, we're always looking for what's available in the market,” the executive says.

READ MORE: Why Has Restaurant M&A Activity Slowed Down in 2022?

Entering 2022, the company is performing as well as it ever has. Focus sold a record 561 franchises last year and opened more than 175 stores in the U.S. and Canada. Auntie Anne’s, alongside Jamba, opened its first drive-thru, and signed deals for 33 more co-brand locations across the country. Also, McAlister’s announced it’s on track to become a $1 billion brand by 2024, which would be a first for any of Focus’ restaurants.

The group has nearly 1,000 nontraditional outlets, with another 270 in the pipeline. This includes Jamba by Blendid, a fully automated kiosk being tested on multiple college campuses. Internationally, the company sold more than 225 units in 2021 and opened more than 215 locations. 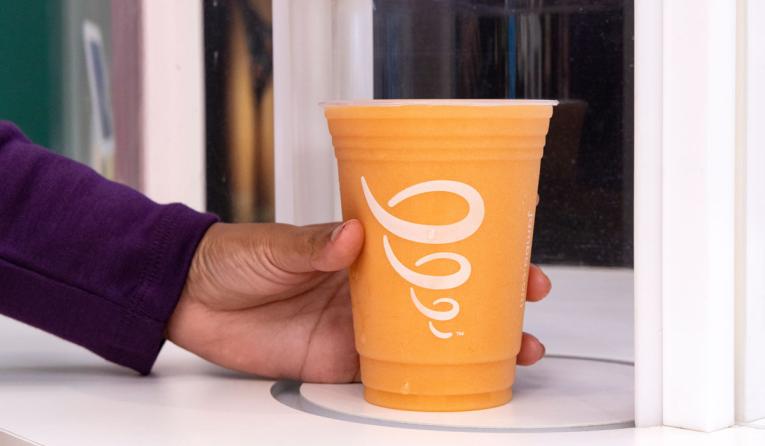 Jamba is Focus Brands' most recent purchase, coming in 2018.

The company is currently testing a new digital platform that will be implemented across all seven chains, which will not only increase consistency and spread costs, but also makes it easier to onboard additional restaurants in the future.

“I think increasingly, we're starting to look at Focus as more of a platform company,” Holthouser says. “You can take a brand, especially a brand without scale, and start plugging them into what we call value engines. Now that we've collapsed all of our guests into one database, start making some of those 14 million available to another brand.”

“We can hook you up into this best-in-class app and website,” he adds. “We can now sell your brands with, I will argue, one of the best development organizations in the restaurant industry. We can hook you up into our licensing. We've made huge investments in supply chain. We can start creating value like this from day one.”

The eighth concept, whenever that day may come, will round out what Holthouser calls “the flavors of Focus.” In other words, the company is not directing its attention toward any brand that would cause redundancy in terms of cuisine. Instead, M&A exploration will potentially center around chicken, burgers, pizza, salads, or maybe even Mediterranean.

Ideally, the brand would be between 150 to 900 stores systemwide. Focus wants concepts that are proven in the marketplace, but at the same time, Holthouser says there is such a thing as being too big. He believes anything over 1,000 units would take the company off task and create issues with integration.

The candidate doesn’t have to be already franchised—just franchisable.

Dixon says there were a number of bidders for every brand that went up for sale in the past year, and he estimates Focus was heavily involved in four to six of them. For half of those potential transactions, the company backed out after doing its due diligence. As for the remainder, the price just became too high.

Focus isn’t looking for a certain number of brands to add either. Holthouser views it as more of a wait-and-see approach. If a brand comes in and doesn’t require much surgery, then Focus could possibly handle two chains, but the ultimate preference is to handle one at a time because of the integration work, which requires about 12-18 months.

“It's just not mashing the balance sheets together,” the CEO says. “Smart guys, they can do that in a week. But it's trying to meld two companies together right here. That takes time. Because they all have franchise advisory councils and they have systems that either need to be evaluated or decommissioned and put on the Focus system. It just takes time. It's not impossible. It's just it's a lot of work and time.”