The 247-unit brand debuted a fresh design unlike anything the Mediterranean fast casual has created before. And there are new food and drinks, too.
Web Exclusives | January 15, 2018 | Danny Klein

Zoës Kitchen's new restaurant design takes its Mediterranean positioning to the next level.

As Zoës Kitchen CEO Kevin Miles described the defining details of his brand’s fresh prototype Thursday night, the building itself decided it was time for some show-and-tell. “You can see, as the lights come down, it starts to feel like, ‘Hey I can come here with a friend. I can enjoy my dinner.’ I think you can see this restaurant speaks and feels more dinner focused than lunch focused,” Miles said during a preview event in Raleigh, North Carolina.

The event unveiled Zoës fourth prototype restaurant since being founded in 1995. This one-of-a-kind unit, located on Falls of Neuse Road in North Carolina's capital city, is a top-to-bottom design shakeup Miles said would be key to the 247-unit brand’s future growth. Zoës is targeting 25 new openings in 2018 and Miles said the new design probably wouldn’t join the picture until late in the year, seeing as most of the construction projects are already underway. Also, Zoës wants to see which new elements work and which don’t before uncapping its potential.

This reactive strategy makes sense considering the widespread changes, which are far from mere cosmetic touches. The new building shares few details in common with any Zoës currently operating, and that stretches from color scheme to culinary innovation.

To start, stepping through the front door, guests will see right into the first truly open kitchen in Zoës history. It’s a sleek, glass-enclosed space with the protein preparation placed in front.

“We want people to see the smoke, the sizzle, it all connects with the senses,” said Antonio Iocchi, Zoës chef and head of culinary innovation. “With the closed kitchen, we weren’t showcasing our fresh cooking.”

This is something that has nagged Chef Iocchi since joining Zoës in 2015 after a run with Brinker International and Romano’s Macaroni Grill. 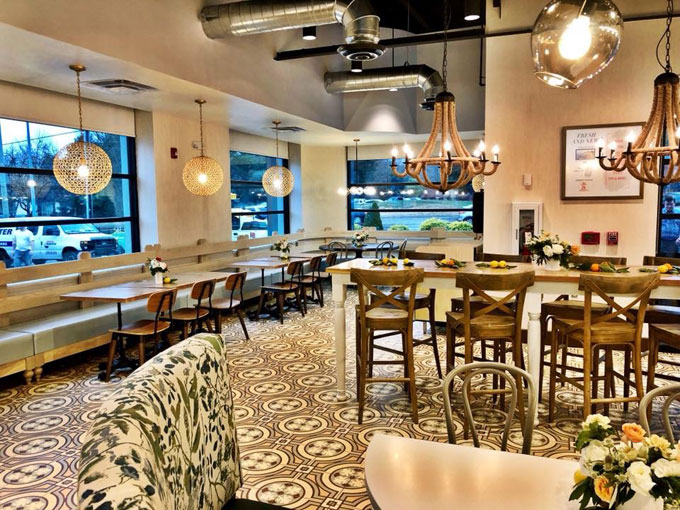 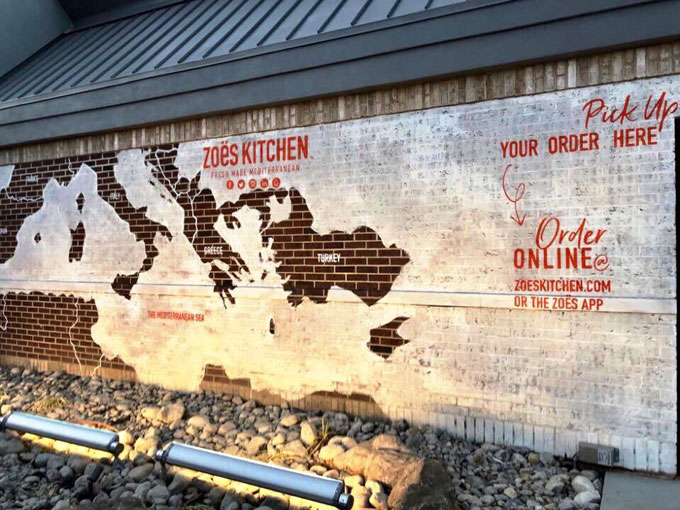 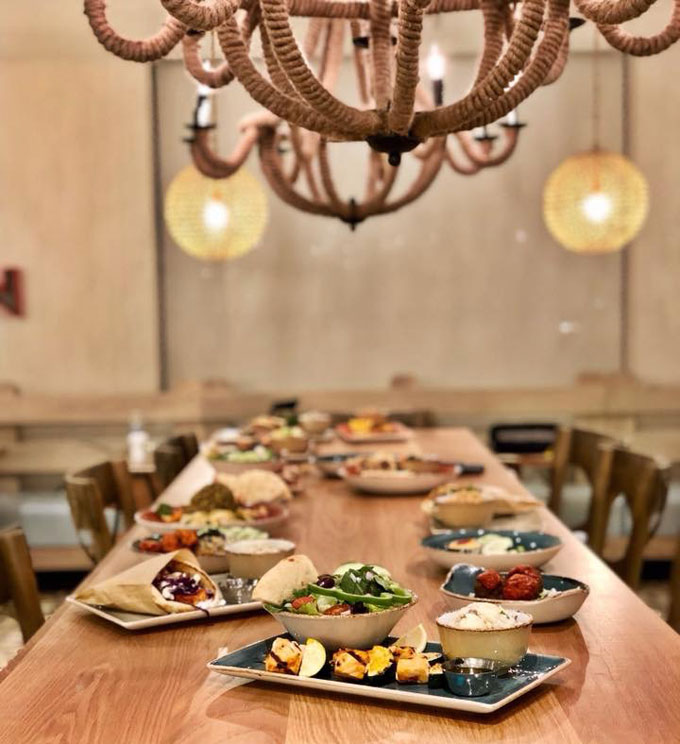 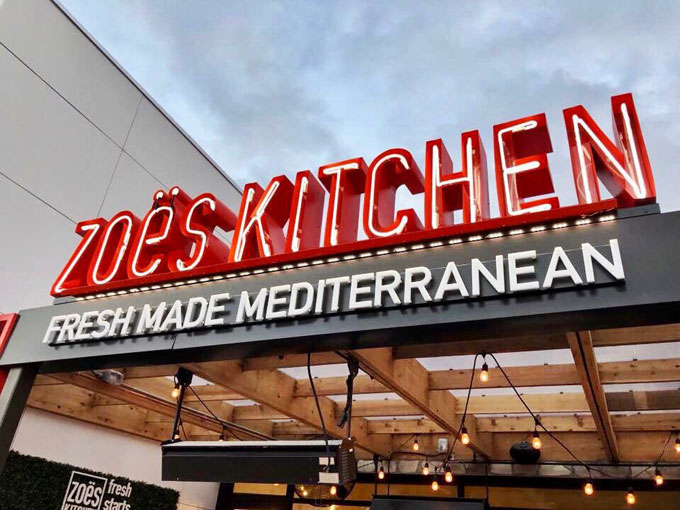 “I was able to walk back in the kitchen and see what we were actually doing. Every day we start from scratch … There is a lot of cutting work. There is a lot of fresh cooking at the moment for the guest. I said, ‘We need to showcase this.’ Why not? Don’t keep it a secret. This is something we need to show off.”

The new design surely accomplishes that. There are no fryers or microwaves in any Zoës, but Miles isn’t sure people really knew what was going on behind the scenes. “The customer, they knew they had good food when they ate at Zoës but they really didn’t get it,” he says, talking about how the fast casual grates cheese, peels cucumbers, makes soups, salads, and more, from scratch.

“How do you bring that to life?” Miles adds. “We want the customer to romance a little bit of that food.”

Nothing happening food-wise is behind the curtain now. The new prototype features an opening in the glass enclosure for sounds and aromatics to waft out. The bustle and preparation of every culinary move is on display, as are the new uniforms, hats, aprons, and shirts created for this location.

It’s also hard to miss what sits next to the open kitchen, just left of the menu board: a station dedicated to wine and a rotating seasonal sangria that’s currently only featured at this restaurant. On preview night, it was Moroccan Sangria flavored with authentic spices, everything from cinnamon to cardamom and some molasses. Chef Iocchi said the drink would traverse the 21 Mediterranean countries Zoës draws culinary inspiration from in its menu. Chef Iocchi added that Zoës has high hopes for its beverage program in this setting, and is expecting “sales to go to a different level.”

“We have a whole new approach,” he says. There’s red and white wine, a Prosecco option, sangria, beer, and also a craft non-alcoholic beverage program that’s unique to the new store as well.

This group of drinks has the ability to rotate just like the sangria. On-trend and health-forward flavors currently on display include: Blackberry Mint Refresher, Tangerine and Turmeric Fresca, Fig and Vanilla Cooler, and Hibiscus Karkade Tea, as well as the standard sweet and unsweet tea options. Cold-brew coffee and kombucha will be tested as well.

Once again, dedicating resources to wine and craft beverages is another way Zoës’ is taking aim at the dinner daypart, often ignored in the fast casual universe. Another is the seating arrangement and ambiance of the space itself. There’s banquette seating that runs the length of the wall opposite the entrance, which is something Zoës has never tried before. While it’s a bit more spacious, the feel is European café to the tee. It mirrors independent restaurants in big cities, where guests sit alongside fellow diners and across from people they know.

Zoës, with u-shape banquettes and round family tables, has promoted communal dining before. But never quite like this. Chandeliers hang above the different seating arrangements and elevate the setting.

Perhaps the most noticeable difference, however, at least at first glance, is the color scheme. The restaurant highlights calming greens, beige and white with pops of bright color throughout, designed to “bring Mediterranean to life,” Miles said. There is eye-catching Spanish floor tile modeled after encaustic tiles often seen in European and Moroccan buildings.

“When you walk into a current Zoës you say, ‘OK, it feels good. It’s upbeat. It’s lively. It’s energetic.’ But it doesn’t necessarily give you a lot of cues about being Mediterranean other than the color. And then we come in here and really wanted to bring that more to life, as we evolved the brand, and really being the authority on Mediterranean.”

And then there’s the patio—another real first for Zoës. The brand has some outdoor seating in certain locations but it’s not nearly as emphasized as this. As Miles said: “It wasn’t a bad experience, but it wasn’t a great experience.”

This layout, which features cooling and heating devices and furniture to fit the setting, along with a painted patio, tries to recreate the experience of dining at an oceanfront Mediterranean restaurant.

This Zoës is also the most dedicated design to off-premises business in the brand’s portfolio. There’s a special wall and section of the restaurant made for catering and to-go orders. Guests can now enter the restaurant and go straight to that section, where a bag with their name on it awaits. Or, if it’s not ready, they can sit in a designated area that doesn’t overflow with the typical traffic.

“[In other stores] we force the customer to make that personal decision whether they want to cut the line, and now we’re giving them an opportunity where they don’t feel like they’re cutting the line,” Miles said.

This fits Zoës reenergized digital push. In the third quarter, the brand introduced a revamped website and mobile app. The site, which arrived August 8, offers guests an improved online experience and updated location finder. This was Zoës first major upgrade of its digital platforms since 2010, when they were first launched.

Another first, which Miles believes will round out the proteins, is the introduction of falafel. The restaurant is the first Zoës to feature it full time. It’s baked, not fried, and crafted without any shortcuts, Chef Iocchi said.

“Five years ago, falafel wasn’t even on the horizon,” he said, “for us or the customer.”

Menu innovation has been the heart of Zoës progress in recent quarters. In June, the company unveiled its largest menu rollout in eight years. It introduced two new proteins, three pita sandwiches, three bowls, four sauces, and a new appetizer.

During the brand’s third-quarter review, Miles said the new menu items were penetrating the menu better than expected and already ranking in the top 10 of menu mix. The restaurant reported same-store sales declines of 0.5 percent in the quarter, along with a total revenue increase of 15.7 percent to $77.9 million, year-over-year. This included a negative impact of 0.9 percent and $1.1 million on comps and revenue, respectively, thanks to hurricanes Harvey and Irma.

This new design, Miles said, is Zoës cementing its standing as a Mediterranean leader. Miles said the conversation around the new design began about two years ago and the project itself was a year in the making.

“Our oldest stores in the fleet were getting old. I think you need to refresh restaurants every five to seven years or,” he said. “Instead of just going back and doing what we’ve always done, we asked ourselves, ‘How do we move with the customer?’”

21 Main Street, Suite 204
Hackensack
NJ
203-883-6060
SH Franchise Finance is an independent finance company, so we know what it is like (more)
POS Systems & Equipment