When considering the growing appeal of Asian fast-casual Bonchon, CEO Flynn Dekker thinks about the rise of rock ’n roll.

The genre was built from the blues, but with more color and flair. The same is true for Bonchon, which takes the classic fried chicken dish that every American knows, and infuses it with Korean flavor.

“[Korea] took their spin on [fried chicken], and dare I say, perfected it,” Dekker said at the recent ICR Conference. “And then it’s come back to us. We’ve got a really unique take on what is a very American staple comfort food.”

Founded in 2002 in South Korea, Bonchon has grown to 389 restaurants worldwide across eight countries. The global brand was brought to the U.S. in 2006, and has expanded to 115 locations. All of those domestic stores are franchised, except for four.

Those numbers are only expected to get larger going forward. U.S. same-store sales increased 15 percent in 2021 year-over-year, and 23 percent on a two-year stack as of late December. The brand opened 11 locations in the U.S. last year, and roughly 30 more are planned for 2022, with development agreements in Illinois, Colorado, Maryland, North Carolina, Florida, New York, Minnesota, Tennessee, and Texas.

Dekker said there’s potential for 3,000 units worldwide, and he expects that number to move up as the fast casual enters more countries. Currently, Bonchon’s footprint is 70 percent international. The CEO says the restaurant has “demand that we have been holding off on in the international markets,” like Europe, Central America, and South America, but the main focus going forward will be domestic.

He believes the majority of units will soon flip to the U.S., which is equipped with a pipeline that is just as large as the existing footprint.

Beforehand, Bonchon leadership believed its “secret sauce” was high-density Asian populations, but that simply isn’t the case anymore with America’s greater appreciation of Korean food and culture. Arguably the best example of this is McDonald’s spending more than $10 million on a celebrity partnership with K-pop band BTS.

While areas with a heavy Asian demographic are good to have, Dekker said it’s not mandatory like it once was. In recent years, Bonchon has found little barrier to entry, with each class of restaurants opening with higher sales than their predecessor—from Minnesota and the Pacific Northwest, to South Florida and Texas.

“We’re really open and we have a lot of white space in some markets that they just hadn’t previously developed before that has allowed us to flourish and to start growing at these much higher rates,” Dekker said. 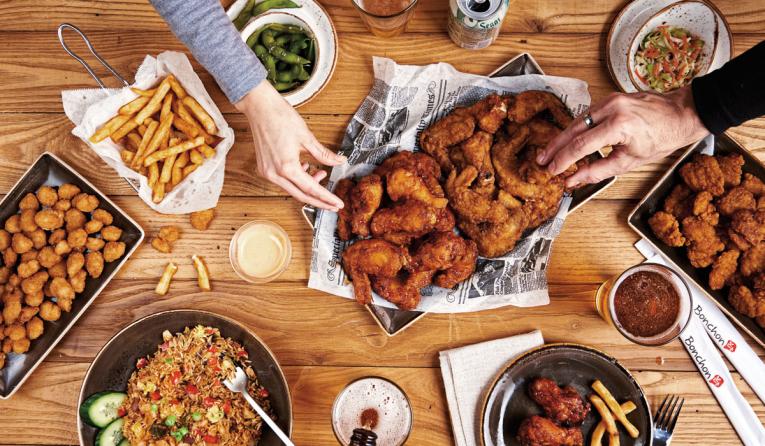 Bonchon’s domestic presence began as a 2,500-3,000-square-foot casual-dining atmosphere that was “heavy on service.” But prior to COVID, the chain was looking for ways to improve value and ROI for franchisees in smaller, 1,800-2,000-square-foot locations.

In late 2020, Bonchon moved its headquarters from New York City to Dallas and announced plans for a fast-casual prototype with a streamlined menu, updated interior design, and new service model. The change made complete sense for the chain, which has seen digital sales grow from about 12 percent to 50 percent in the past couple of years thanks to implementation of a sophisticated online ordering platform and native delivery capabilities, a standardized POS system, and a partnership with DoorDash.

Similar moves are being made across the globe.

“Thailand up until pre-pandemic was a very high-end, upscale-casual experience,” Dekker said. “ … Now I think they’re all making a similar transition as we are in the U.S., which is to fast casual. Thailand pivoted very quickly to offsite kitchens, delivery/carryout only, and the fast casual.”

Bonchon, however, is not immune to the macroeconomic factors affecting the entire industry. The fast casual has seen record-high prices for chicken and oil and was forced to find more substitute products in the past year than any time in Dekker’s career.

The industry veteran thinks inflation will remain at least through the end of 2022, and that operators will have to learn how to live with supply chain disruptions. That means pivoting away from right-on-time ordering and going forward with six-month lead times so there’s enough inventory for new restaurants.

Dekker attributed the ongoing labor shortage to transitory issues like government subsidies, individuals fearful of COVID, and parents facing uncertainty with child care, and longer-term impacts such as lower birthrates and less immigration to the U.S.

He believes it’s an issue everyone will have to deal with for an undetermined period, and that means the incorporation of more technology. Bonchon wasn’t too involved with technological innovations at the start of the pandemic, Dekker said, so the brand is still playing catchup in terms of streamlining POS and plugging in a robust CRM.

But the CEO knows that future is coming.

“If you asked me three years ago my philosophy on automation, I probably would’ve couched it in, if people want to work, I want to give them a place to start their career or build their career and have a job,” Dekker said. “Today, the reality is, is that there aren’t enough people in the pool. And that’s because of less people entering the workforce. … Now we have no choice but to streamline and automate the business.”

Despite these headwinds, Dekker remains confident about Bonchon’s growth trajectory.

The data tells him that Bonchon will have 800 units globally by 2026. Amid that expansion will be two to three company-run restaurants to test formats and menu iterations, but most new stores will be franchise-led.

“This has a lot of legs,” Dekker said. “There’s a lot of demand. And so it’s just a matter of smart, thoughtful growth, but I think we’re going to fit a huge ramp here.”

Shake Shack Vies for Gen Z by Entering Gaming World
Why Inflation is Making Customer Experience More Important than Ever
The State of Restaurants: Demand, Price, and a Race for Loyalty

Inside Restaurant Brands International's $1 Billion Bet on Firehouse Subs
Restaurant Franchising After COVID: A Story of Resiliency and Rebound
A Vision of a Post-COVID Era Emerges for Restaurants