The concept will open the gates for Chipotle to enter more urban areas that wouldn’t have supported a full-size restaurant before.

Chipotle CEO Brian Niccol predicted in October the fast casual would eclipse $2.5 billion in digital sales in 2020. Just a year earlier, Chipotle celebrated clearing $1 billion, which was a significant milestone for a brand that played catchup in a number of innovation corners.

But once it got started, the digital ball rolled fast.

COVID-19, however, represented a different kind of accelerator. In many stores, just the second make-line alone (responsible for digital transactions) pushed average-unit volumes of well over $1 million. A few years ago, it was “a few hundred thousand,” Niccol said. Without any dine-in business, this would rank Chipotle 36th in AUV among the country’s top-50 highest grossing fast-food brands by sales per unit in 2019, ahead of Dunkin’ at $968,000. All in, Chipotle restaurants averaged roughly $2.2 million last quarter.

While the surge was undoubtedly a pandemic byproduct of quarantine behavior and heightened adoption for things like delivery and mobile ordering, the alluring point for Chipotle was it held 80–85 percent of digital sales gains in Q3 even as it recovered 50–55 percent of in-store business. This past quarter, about half of Chipotle’s digital business came via delivery (the rest through order ahead and pickup). As of October, Chipotle’s digital mix remained in the “high 40s,” Niccol said.

In Q3, digital sales soared 202 percent, year-over-year, to $776 million, or 40 percent of sales. For some potential future perspective, it was up 216.3 percent to nearly 61 percent in Q2, or $829.3 million. At Q3’s exit, Chipotle had only 10 restaurants closed with roughly 85 percent offering limited in-restaurant and/or patio dining. The remaining were off-premises only. Chipotle had about triple the temporary closures in July, mostly in malls and shopping centers. Lobbies began reopening in mid-May.

OTHER RESTAURANT OF THE FUTURE MODELS

McDonald’s has several new drive thrus in the works

When Q2 ended, 30 restaurants were closed and 85 percent offered limited in-restaurant and/or patio dining. So you can begin to see where this might settle if that added 15 percent returns.

The “high 40s” number will surely decline, but remain far above pre-virus levels. Chipotle reported just $372 million in digital sales in Q1. Further, it was $262 million in Q2 2019 and only 12.9 percent of sales the previous Q4. Wherever it drops percentage wise, maybe it’s in the 30s, the overall take stacked on in-store dining is going to be significant. Especially when you factor in Chipotlane mobile order-ahead windows are expected to represent 60 percent of growth this year and 70 percent-plus in 2021. Today, there are 128, including five conversions, with the digital gap versus non-Chipotlane units about 20 percent, driven entirely by higher margins attached to more pickup and order-ahead transactions (versus delivery). The 17 Chipotlanes mature enough to be included in the company’s comps base, meaning they opened well before COVID, appreciated sales 10 percent higher over the same period. More recent pandemic openings are actually 25 percent better.

With this all stirring at break-neck pace, it’s not surprising to see Chipotle enter another surging trend. The chain Wednesday unveiled its first digital-only restaurant.

Called the “Chipotle Digital Kitchen,” it will be located just outside the gate of the military academy in Highland Falls, New York. It’s opening Saturday for pickup and delivery only, and will allow Chipotle to enter more urban areas that typically wouldn’t support a full-size restaurant, the company said. Additionally, it will allow for flexibility with future locations.

Chipotle’s Digital Kitchen concept is focused on accelerating digital business in non-traditional venues. The company said the build is unique “because it does not include a dining room or front service line.” Guests must order in advance via the fast casual’s website, app, or through third-party delivery partners. Orders are picked up from a lobby designed to include all of the sounds, smells, and kitchen views of a traditional Chipotle, the company added.

It will also service large catering orders available for pickup in a separate lobby with its own dedicated entry. 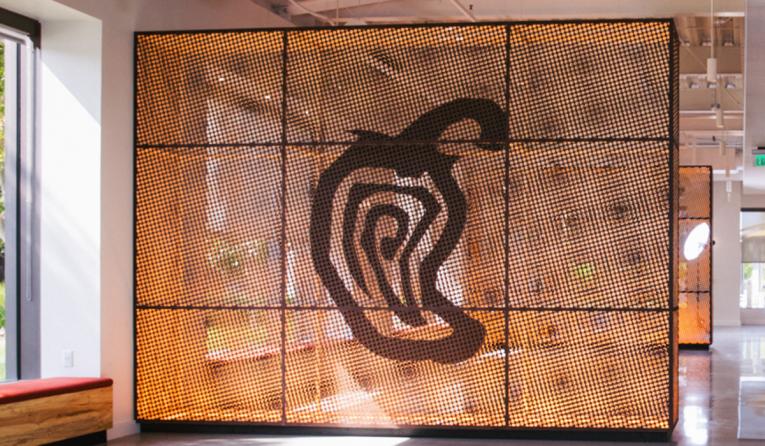 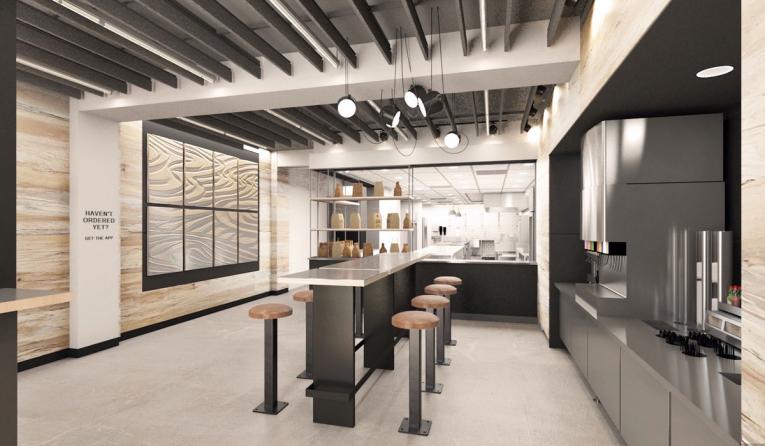 Chipotle's digital-only restaurant will mimic the feel and sensory experience of a traditional location.

"The Digital Kitchen incorporates innovative features that will complement our rapidly growing digital business, while delivering a convenient and frictionless experience for our guests," said Curt Garner, chief technology officer of Chipotle, in a statement. "With digital sales tripling year over year last quarter, consumers are demanding more digital access than ever before so we're constantly exploring new ways to enhance the experience for our guests."

Chipotle’s fresh design concepts and menu innovation are unfolding at the company’s “Cultivate Center” in Irvine, California, which is located minutes from corporate HQ. The new 22,000-square-foot facility features the same natural ascetic with ecofriendly materials and designs found in Chipotle’s restaurants. To pay homage, the original sign from the first Chipotle, opened 1993 in Denver, sits atop the entryway.

The Center is also home to Chipotle’s official test kitchen and includes a production studio for filming commercials and developing creative concepts as well as a room for restaurant training and development. It’s home to the “Center for Excellence for Design and Construction” as well and houses a fully equipped development lab, metal cutting, and woodworking machinery to build and test new prototypes before roll out. Additionally, there’s a consumer research center to allow for focus groups. The conference rooms and event spaces are built for board meetings, group gatherings, and special events.

"The Cultivate Center is a best-in-class space that will allow us to push the boundaries of innovation while delivering on our mission of cultivating a better world," said CDO Tabassum Zalotrawala in a statement.

Given the COVID backdrop, it’s difficult to predict what’s next for Chipotle’s store formats. Last December, just based on digital growth, with no knowledge (obviously) of an impending pandemic, the company started to trial four new units of the following types: an urban store front, standalone restaurant with a Chipotlane pick-up window, and an endcap location with a Chipotlane. They will be located in Chicago, Cincinnati, and two stores in Phoenix. It also planned to pilot the fresh look in two retrofits in Newport Beach and San Diego, California.

So this was something on Chipotle’s mind before contactless and other COVID-supercharged trends entered the equation.