It was big and buzzy news late last year when Chipotle eclipsed $1 billion in digital sales—a milestone it hastily chased as consumer behavior shifted toward convenience, from expanded delivery to awareness to “Chipotlane” order-ahead lanes, in-store pickup shelves, and a second make-line dedicated to off-premises execution.

Among the countless ways COVID-19 has been characterized in the past seven-plus months, a reality for many restaurants, especially quick-serves, is that it didn’t invent new trends so much as it lit a fire under previously accelerating ones. None more so than digital.

And now, less than a year later, Chipotle’s billion-dollar mark proved just a precursor. CEO Brian Niccol said Wednesday the brand’s digital sales are on pace to not just reach $2.5 billion in 2020, but exceed the figure. For perspective, Chipotle today is pushing digital average-unit volumes of “well over $1 million.” It was just a few hundred thousand a few years ago. This means Chipotle’s second-make lines alone—with no in-store element—are generating AUVs that would have ranked 36th among America’s top-50 highest grossing fast-food brands by sales per unit in 2019, ahead of Dunkin’ at $968,000. Also, 50th for full-service chains, more than $200,000 clear of Waffle House.

But where the COVID effect really surfaces is in the split. Chipotle’s AUVs in Q3 were roughly $2.2 million overall.

Digital sales in the period, which ended September 30, leapt 202 percent, year-over-year, to $776 million, or 49 percent of sales. This slide a bit as dine-in returned. Last quarter, it rose 216.3 percent to nearly 61 percent of Chipotle’s business, accounting for $829.3 million—the company’s highest quarterly level in brand history, by miles.

Yet if we go back further, Chipotle’s digital take was $372 million in Q1 (a company record at the time). That, though, was more than quadruple Chipotle’s performance from three years ago. In Q2 2019, it was $262 million. The previous Q4, digital mixed only 12.9 percent of sales.

In some ways, Q3’s result is more impressive than Q2’s simply because the lockdown landscape isn’t as severe. Chipotle has just 10 restaurants closed today and roughly 85 percent offering limited in-restaurant and/or patio dining. The remaining are off-premises only. Chipotle had about triple the temporary closures in July, mostly in malls and shopping centers. Lobbies began reopening in mid-May.

Another difference is Chipotle, even with the Q2 digital rocket, saw same-store sales decline 9.8 percent as total revenue fell 4.8 percent to $1.36 billion, the company’s first decline in at least 14 quarters.

Performance began to turn positive in June at 2 percent. Chipotle Wednesday, however, announced its top-line surged back into the black in Q3 with comparable sales gains of 8.3 percent versus year-ago levels. The brand’s two-year comp stack is 20.2 percent, similar to the 20.4 percent pre-COVID level it delivered in Q4 2019.

Revenue upped 14.1 percent to $1.6 billion. Chipotle also opened 44 new restaurants and permanently closed three—continuing a year-long acceleration from 19 in Q1 to 37 this past quarter.

During Q3, about half of Chipotle’s digital business came via delivery. The difference flowed through order ahead and pickup.

As of October, Niccol shared, Chipotle’s digital mix remained in the “high 40s.”

“Chipotle has transformed itself over the past two years to a real food and people company powered by technology,” he said on a conference call.

Chipotle Eyes Growth in the Wake of COVID-19

Why COVID Could Kickstart Chipotle’s Road to 5,000 Restaurants (Q2 recap)

One example he provided was Chipotle’s rewards program, which has enjoyed a COVID ride of its own as customers seek digital channels they might have ignored before. The ability to order ahead and pay, and pickup with zero contact, continues to gain adoption amid a climate where many consumers are still debating whether leaving the house (or dining in restaurants) is a personal safety risk. Today, Chipotle has 17 million enrolled members. From April to July the base bumped some 3.5 million. At that point, there were 15 million users, a pace of a million adds per month from its launch 15 months prior. And more than 70 percent of digital orders were coming from loyalty guests.

The 17 million pool is larger than typical viewership for a Monday Night Football broadcast. Niccol said this gives Chipotle “a content distribution and engagement network that we can use to elevate engagement and awareness of brand initiatives.”

Additionally, a lot of these members, he added, are new to Chipotle. They’re not simply dine-in guests who switched to off-premises in light of COVID.

“… what really excites us is that we are in the early stages of using this valuable tool to understand consumer behavior that will allow us to enhance their journeys and ultimately drive higher sales,” Niccol says. “We can also utilize these learnings to reengage members if their visits decline, which should efficiently sustain the stickiness of our digital platform.”

If (hopefully when) COVID clears, Niccol expects loyalty to “be a key enabler” of Chipotle’s digital flywheel as it optimizes the use of the resulting dataset. It’s the type of language Starbucks has used for years off its trailblazing platform, which reported 18.8 million 90-day active members this past quarter. It was 19.4 million pre-pandemic. Starbucks Rewards accounted for 44 percent of its U.S. tender in Q2.

All of this in mind, Chipotle now has two large and growing business to manage. And retention and employee engagement is essential to both. “A strong culture is a critical part of running successful restaurants,” Niccol said. 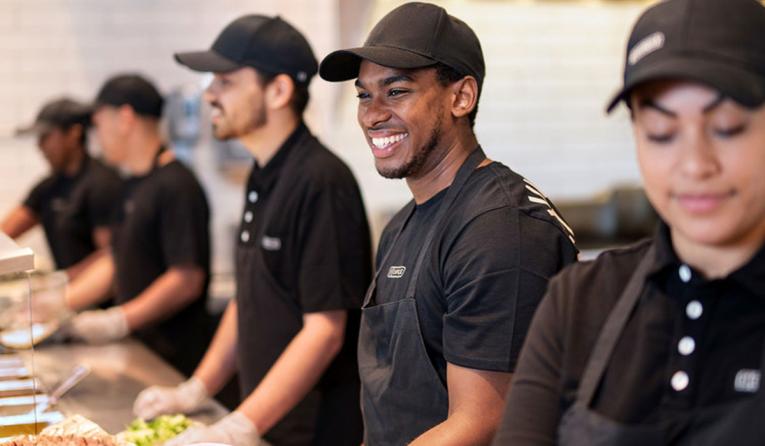 Since the launch of Chipotle's Cultivate Education program in 2016, more than 8,000 employees have enrolled in classes leveraging the tuition reimbursement benefit or debt-free degrees introduced last year.

Recently, Chipotle expanded its debt-free degrees program to include Paul Quinn College, the nation’s first urban work college and one of the oldest historically Black colleges and universities in the country. The brand covers 100 percent of tuition costs up front for more than 75 different types of business and technology degrees for eligible employees, including crew members, through a partnership with Guild Education.

Of those enrolled in Chipotle’s education assistance program, Niccol said 85 percent are crew members. It’s seen a retention rate 3.5 times higher among those participating. And crew members enrolled are 7.5 times more likely to move into a management role within the organization. Nearly 70 percent of Chipotle’s GMs are internal promotions.

This is vital beyond culture and the fact retention and promotion are generally more cost effective than hiring from the outside.

Niccol called it “extremely important as we promote and hire new leaders to help support continued growth in our digital business as well as a meaningful acceleration in 2021 new restaurant openings.”

On that latter note, Niccol said Chipotle has more than 6,000 locations in sight, with AUVs expanding above $2.5 million and margins at or above 25 percent.

Chipotle exited Q3 with 2,710 restaurants. There were 2,546 this time a year ago. But vividly, Chipotle had 2,408 on December 31, 2017. Growth had slowed in 2018 and just started to pick up before the pandemic arrived—80 debuted in Q4 of that fiscal year, more than any other period at any time in Chipotle’s history.

Given real-estate conditions potentially loosening as more sites come available in the wake of closures, and the development of high-margin “Chipotlanes,” the only thing that could really slow Chipotle at this point is recruitment in a challenging labor arena. How difficult might come boil down to if another stimulus passes and whether it includes expanded unemployment benefits or not, and to what extent (once again, a lot is riding on this election).

Chipotle previously unveiled plans to hire 10,000 new people with a "We Are Open. We are Growing. We Are Hiring" campaign that launched in May and resulted in roughly 8,000 hires by mid-summer.

“I think we've got a great employee value proposition,” Niccol said. “So not surprising, we're attracting a lot of applicants. The investments that we've made and the way that we've handled, I think, this COVID environment in regard to honoring bonuses, providing our employees with restricted stock, and also giving them all the tools they need, whether it's mental health benefits, debt-free degrees, obviously a lot of the work around diversity and inclusion, all these things, I think make the job really exciting.”

“And then you layer in the simple fact, we're a growth company, right? So you're going to come into this company—maybe you join as a crew member; maybe you join as a kitchen manager. But we're going to be building 200-plus restaurants and there's a growth opportunity for you wherein in the next 18 to 24 months, you could find yourself being a manager running a restaurant.”

Chipotle has about $1 billion of cash on its balance sheet. So when you talk about chains ready to pounce on growth opportunities ahead, it’s clearly well-positioned.

To Niccol’s 200-plus comment, Hartung noted, in a “couple-of-year period,” the brand could return to that pace. It would represent nearly 100 more projected openings per calendar than Chipotle planned for 2021 before the crisis.

What’s inspiring some of this growth is the Chipotlane opportunity. Currently, there are 128, including five conversions. The digital gap versus non-Chipotlane units remains about 10 percent, driven entirely by higher margins attached to more pickup and order-ahead transactions (versus delivery). The 17 Chipotlanes mature enough to be included in the company’s comps base, meaning they opened well before COVID, have appreciated sales 10 percent higher over the same period. More recent pandemic openings are actually 25 percent better.

This year, Chipotle expects 60 percent of its growth to include the mobile, order-ahead lane. It should eclipse 70 percent in 2021. Of Q3’s 44 openings, 26 included the feature.

Out of the gate, the 10 percent boost equates to about $200,000 in added volume. Not a bad return for a $75,000 to $100,000 investment. In addition to new growth, expect to see Chipotle relocate or convert older units, Niccol said. “We're starting to see much more traction with landlords being willing to work with us on the conversion and we're also seeing nice results from the conversions that we've tested to-date,” he said.