The chain wants to enter new markets with franchisees and bolster digital.

The intensive work was labeled a “transformation agenda,” which CEO Bernard Acoca said established “the foundation and fundamentals required for successful growth.” The seeds were planted—digital expanded exponentially, drive-thru and the back-of-house became more efficient, and the brand reinforced its L.A.-Mex culture with a contemporary prototype and design.

Those measures lead seamlessly into El Pollo’s new “acceleration agenda,” which is a three-year strategic roadmap to grow in new markets with franchisees, build an asset-light model, further digitize business, and hone in on what makes the brand unique.

“In a nutshell, our acceleration agenda is all about scaling for rapid and successful growth over the next three years by leveraging the operations and brand work we've completed over the past three years and implementing and expanding our beautiful new L.A. Mex restaurants design, which we believe will deliver improved unit economics versus what we have today,” Acoca said during the chain’s Q4 earnings call.

The initial expansion efforts will focus on penetrating Western and Southwestern DMAs before moving East. El Pollo began recruiting new franchisees in January, just a month after the debut of its new L.A. Mex design that will “modernize and reset” the brand through remodels and new builds. One model is drive-thru only while the other has a small dining room that opens up to a large patio through garage-style doors. The design features L.A.-inspired murals, but also elements that harken back to El Pollo’s Sinaloan and Mexican roots like cleavers in door handles and turning forks on chandeliers.

The plan is to complete 55 remodels in 2021, with a long-term goal to finish more than 300 in the next four to five years. In addition, six new stores will be built with the L.A. Mex design this year.

“I would say we're pretty much on track in turn for our plans and we are in a vetting process now,” said CFO Larry Roberts said. “Obviously, with our existing franchisees, that's pretty easy, since we know them and we know their financials and things. With the newer ones, they're going through the vetting process now and assuming that we get through that, we'll really start talking to them in a lot more detail about exactly what parts of the markets we'll look for them to develop and reach agreements with them.”

To build an asset-light organization, Acoca said El Pollo will reallocate resources to provide more support to franchisees. For example, the brand will focus on compliance and operational capabilities, like the development of franchise-specific leadership training programs.

“There's not a lot of incremental G&A,” said Roberts, referring to the chain’s reallocation strategy. “It's more again just pulling some resources from one area and devoting more into this franchise development and franchise expansion. So that's my current thinking. But again, I think the timing is not immediate. We've got a little time before we'll start making those investments on the franchise side.”

At the end of Q4, El Pollo had 196 corporate stores and 283 franchises. Regarding the asset-light plan, Roberts said there’s no “grand scheme” to refranchise a lot of restaurants, but he added that El Pollo will always look on a case-by-case basis.

“If we do that, we might look to use that to get some new franchisees into the system, but as of now, we don't have any big scheme to go refranchise like 50 percent, 60 percent, 70 percent of our company-owned restaurants,” Roberts said. “Nothing like that.”

The next part of the acceleration agenda involves continually growing digital channels, a journey that kicked up a notch amid the pandemic. In 2020, digital mixed 10 percent, up from 5 percent in 2019. Loyalty membership, which Acoca views as the centerpiece of El Pollo’s long-term go-to-market strategy, increased nearly 40 percent to 2.3 million.

In September, El Pollo implemented GPS-enabled curbside pickup, a program that’s now available at more than 97 percent of the system. Customer wait times are averaging about 90 seconds at company-operated restaurants. Acoca said curbside is still a small portion of sales, but he expects it to rise as more customers download the app.

In terms of speed, the company has instituted several measures to improve the drive-thru process, including more efficient labor deployment, readiness guidelines, packing side items and salsa, and better positioning of equipment. El Pollo is also testing tablets that will allow employees to take orders and payment of drivers in line. The chain wants to cut drive-thru times in half.

The overall goal is to increase digital’s mix to 30 percent in the next three years. To do that, El Pollo is partnering with Organic, a digital agency and subsidiary of Omnicom. Digital currently comprises 40 percent of the chain’s media spend.

The final portion of the new game plan is to differentiate the El Pollo brand by making L.A. Mex as well known as Tex-Mex cuisine. This is best illustrated by the new Pollo Fit Bowls, which combine the healthier-for-you L.A. lifestyle with more Mexican-inspired ingredients like cotija cheese and pico de gallo. The brand also recently rolled out new Loco Lunch Boxes that come with a creative design and packaging and are geared toward strengthening the lunch daypart.

“There'll be more of those kind of L.A. Mex influenced offerings throughout the course of the year,” Acoca said. “I think what you'll see with the menu, just generally speaking, is a focus on a few things—better-for-you products, portability given how important the drive-thru has become, and three, an attempt to expand dayparts by really getting at the snacking occasion a little bit more than what we get today.”

El Pollo’s other differentiator will be creating “moments of connection.” Acoca said this will come through exchanges inside restaurants and online services via the loyalty program.

“Moments of connection are about creating memorable experiences that delight our customers by acknowledging who they are as individuals and what they need from us as a brand,” the CEO said. “To that end, we will continue to train our general managers to be powerful coaches, whose main responsibility is to build the restaurant teams that feel not just empowered to take care of our customers, but to build relationships with them over time. Similarly, we will look to humanize our digital experiences by surprising and delighting our customers with events and offers that demonstrate that we know them better than any other brand.” 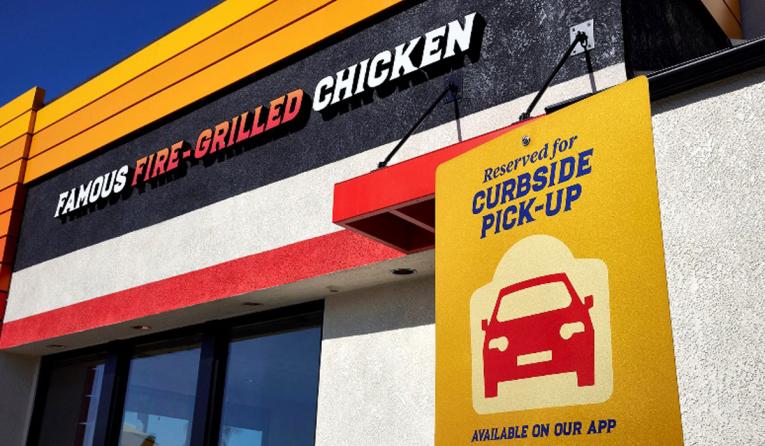 As it has been for most of the pandemic, El Pollo’s Q4 same-store sales were driven largely by geography.

In the quarter, systemwide comps declined 2.1 percent in metro Los Angeles, but increased 3.3 percent in outside markets. L.A. stores were impacted in November and December as California implemented stay-at-home orders. The locations saw staff shortages, reductions in hours of operations, and temporary closures. The chain also believes the high unemployment in L.A. contributed to the negative quarter.

But the company sees these trends as macro-driven and short-term. El Pollo’s dining rooms are still closed, but patios have reopened. The company expects L.A. and Orange counties to allow dining rooms to reopen to 25 percent capacity next week.

“Although probably we were not inclined in the past to open up dining rooms at 25 percent because that business is coming back a little bit more slowly than we expected, I think we will capitalize on the opportunity when certain counties do reopen up the 25 percent to rebuild that business once again,” Acoca said. “We think we can do that without adding any incremental labor at 25 percent, so there's no harm in doing it. So it's really going to be a little bit of a wait-and-see.”

Systemwide, same-store sales in Q4 decreased 0.2 percent, including a 3 percent slide at corporate units and a 1.8 percent rise at franchises. The reason for the difference is that all company-owned stores are based in California.

Year-to-date, the system is slipping 2.6 percent, including a 6.8 percent slide at company stores and a 0.5 percent increase at franchises. Locations in Los Angeles are decreasing 5.6 percent while outside markets are lifting 2.7 percent.

Acoca said a significant part of the L.A. trends is the pandemic’s disproportionate effect on the Hispanic community, which represents half the customer base. The good news, however, is the decline in COVID cases and the arrival of more stimulus checks.

“As the situation improves here, we expect that business to slowly come back,” Acoca said. “How quickly it comes back has yet to be determined. Nevertheless, we continue to figure out ways to speak to that demographic group in ways that are relevant to them, certainly as it pertains to value, but I think it's going to really depend on how much the L.A. economy comes back. I know we're not the only brand experiencing this. Even more value-centric brands that drive a lot more discounting than we do are experiencing similar declines.”