The chain posted its best sales day ever in April.

In January, the brand revealed a new, multi-tiered strategy that envisioned growing into new geographies with franchisees, building the right organization for asset-light growth, evolving the brand by digitizing the business, and exaggerating what makes El Pollo special and different.

While that process is underway, all-time highs are being set. El Pollo recently achieved three average weekly sales records in a row, and posted its highest sales day ever on National Burrito Day (April 1). In April, comps soared 13.5 percent on a two-year basis.

“We are very pleased with our solid start to 2021 and the sales trends we are currently experiencing, which we believe indicates that we are at the start of a strong recovery,” CEO Bernard Acoca said during the chain's Q1 earnings call.

As for specific progress on the Acceleration Agenda, digital business is approaching 11 percent of total sales, primarily driven by third-party delivery. Additionally, the loyalty customer base has grown by roughly 200,000 members since the start of 2021. That led to an increase in loyalty transactions, which are the centerpiece of El Pollo’s long-term go-to-market strategy.

Regarding unit development, El Pollo is working with existing franchisees and recruiting new partners to enter new markets. Acoca said he expects new agreements to be announced over the next several months. The brand ended Q1 with 481 restaurants—283 franchised and 198 corporate.

The brand said in January its initial expansion efforts will focus on penetrating Western and Southwestern DMAs before moving East. El Pollo began recruiting new franchisees in January, just a month after the debut of its new L.A. Mex design that will “modernize and reset” the brand through remodels and new builds. The brand expects to open three to five new company-owned restaurants and four to six new franchised restaurants in 2021.

In terms of building the right organization, El Pollo is continuing to make progress on its speed-of-service initiatives that were implemented late last year. This includes efficient labor deployment, readiness guidelines, repacking side items and salsa, and better positioning of equipment in the restaurant. In Q1, the chain expanded its order-taking tablets to 10 restaurants. The innovative tech allows employees to take orders and payments from customers while they’re in the drive-thru. The end goal is to cut order and window times by 45 seconds. The plan is to expand the test in May, and hopefully roll it out across all company stores in the fall.

To emphasize what makes El Pollo special, Acoca said the chain will “execute several brand sparks” in 2021. He believes those sparks will give the brand an opportunity to deeply connect with its target audience. The first iteration of this has already begun. El Pollo launched a “Strong Like a Madre” grant initiative that will provide 12 mothers with $5,000 grants to pursue their dreams.

“Our confidence is steadily growing that the worst of the pandemic is behind us, with positive sales trends, continued progress in implementing our Acceleration Agenda, and vaccines becoming more widely available, our team members and franchise partners are ready to capitalize on a more normalized operating environment,” Acoca said. 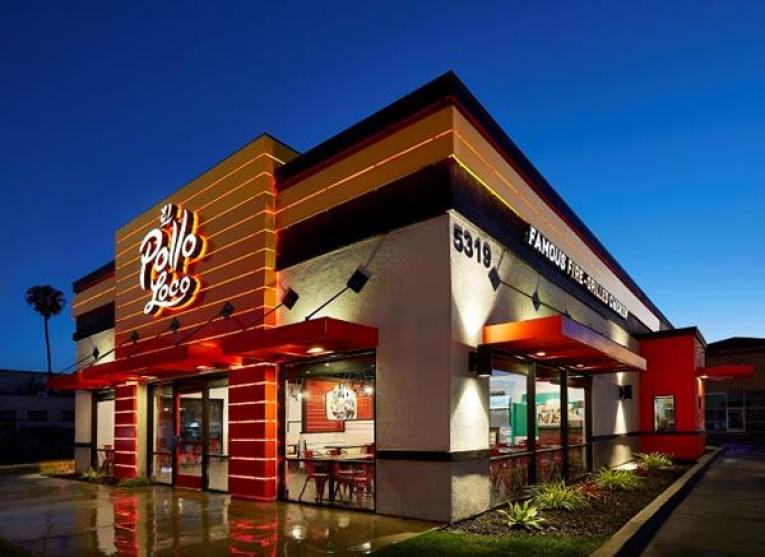 Drive-thru still accounts for just under 70 percent of business.

In Q1, franchised restaurant comps lifted 10.5 percent while company-operated stores grew 3.3 percent. The main difference between the two groups is that 74 percent of company-operated locations are based in Los Angeles, a city that’s been greatly restricted for most of the pandemic. L.A. County received the go-ahead to allow 50 percent dining only recently. Acoca also makes the point that El Pollo’s customer base in L.A. skews very heavily Hispanic, and the chain has seen a slower recovery in that particular demographic in comparison to the general market.

So there are specific reasons for the drag on sales. The good news is, both of them are temporary and external factors.

“Outside Los Angeles, we continue to be pleased with the sales trajectory of our outer market restaurants that have consistently achieved positive same-store sales growth since June of last year,” Acoca said. “While a smaller subset of our overall restaurant base, we have seen outer market comparable sales improve more dramatically than at our L.A. units, which not only bodes well for the health of our overall system, but gives us even greater confidence about the future of our core L.A. market as economic activity continues to rebound in Southern California.”

READ MORE: The Next Evolution of El Pollo Loco Has Arrived

Drive-thru still accounts for just under 70 percent of business. Dining rooms are at 50 percent capacity, and while there’s been a slight uptick in that business, it hasn’t returned anywhere near pre-pandemic figures. As that dine-in channel does come back, El Pollo expects average check to slow down and flatten out as transactions grow, due to the more individualized nature of dine-in orders. To get a sense of where El Pollo is at, average check increased 15.7 percent at company-run stores in Q1 and transactions dropped by 10.7 percent.

Margins in January and February were challenged due to COVID-19 related expenses, but in March they were strong at over 20 percent. Acoca indicated that margins may be impacted as the dine-in channel comes back.

“From a margin perspective, I think a potential impact of the dining room, which we haven't really done too much yet, is just when the dine-in traffic is significant enough, do we need to put some incremental labor in to comply with the regulations around keeping restaurants clean and those types of things,” Acoca said. “So that's to be determined.”

As far as staffing goes, Acoca said the tightness of the labor market isn’t universal across the board. There’s a little bit of aggravation in some restaurants, but not all.

“So right now we are doing a pretty good job contending with it, but with that being said, we are putting in place some additional actions to ensure that we are increasing our staffing levels, and that we are kind of increasing our hiring practices more broadly," Acoca said. "But right now, right now at present, it seems to be manageable, because as I mentioned, it's not widespread. It's more primarily concentrated in some particular areas."