Pie Five's low-carb cauliflower crust has been a hit.

It’s been a challenging stretch for RAVE Restaurant Group’s fast casual, Pie Five. Also the parent of legacy full-service concept Pizza Inn, RAVE shuttered five Pie Five stores in the fourth quarter to bring the total to 73, the company announced during its fourth-quarter review. For perspective, in February 2017, Pie Five debuted its 100th location in Independence, Missouri. Pie Five has steadily retracted its unit count over the last two years, including an 18-store cut in mid-2017. After closing nine franchised and nine corporate locations, Pie Five had 86 last March.

The company reported a net reduction of 11 Pie Five restaurants for fiscal 2018.

RAVE chief executive officer Scott Crane said Pie Five accelerated momentum throughout the year, and sales are trending positive. “The Pie Five brand faced many challenges in the past year, but the recent quarter show the trends are improving, as our top-line growth initiatives and new product offerings have been met with [positive] consumer response,” he said during a conference call.

He highlighted the chain’s low-carb cauliflower crust, sandwich melts, and 14-inch sharable pizzas as examples. Per Forbes, the cauliflower offering was so popular the chain had to order 15 percent more of the crust than what it currently sells for glute-freen crust within four weeks of launch.

“It’s a right-sized model that factors in current labor and real estate costs in the fast-casual industry. It offers reduced startup costs and a competitive return for franchisees at the unit level,” said Bob Bafundo, who was named the company’s president last week.

“This model focuses on speed and simplicity with a limited menu and an emphasis on building off-premises sales through carry out online ordering and third-party delivery,” he added. 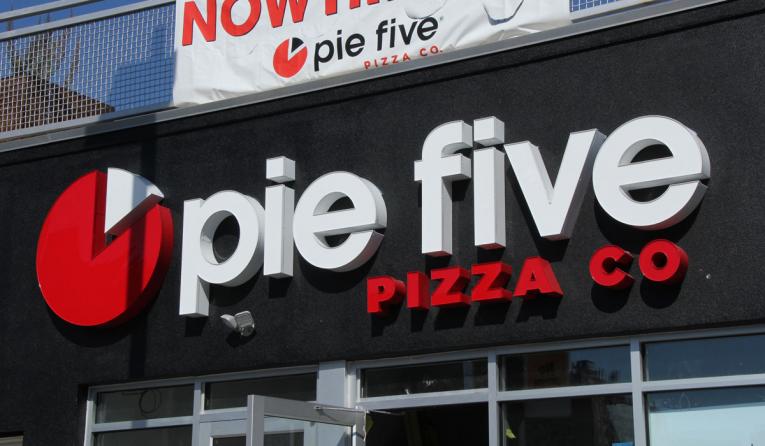 The company reported a net reduction of 11 Pie Five restaurants for fiscal 2018.

The first location is set to open in Garden City, Kansas, in October, with additional stores already in development, Bafundo said.

Pie Five finished the year with 72 franchised stores and one company-run location. Bafundo said the refranchising of the system allowed Pie Five to partner with existing franchisees to develop and test sales-driving initiatives.

“By closing underperforming Pie Five locations and transferring company-owned locations to franchisees, we've been able focus our efforts on branding initiatives and the success of our franchisees,” Bafundo said in a statement.

“We attribute the increased restaurant traffic and sales momentum to new initiatives such as online ordering, all-day buffet, and remodeled franchise locations. We believe this momentum is continuing in fiscal 2019,” Bafundo said. “We are closely monitoring the effects of Hurricane Florence on our North Carolina and South Carolina stores but, despite weather challenges, we are optimistic about a seventh consecutive quarter of growth in Pizza Inn comparable store retail sales."

Pizza Inn’s domestic footprint increased by one store to 153 in the quarter. International units finished the year at 58. “At Pizza Inn, we are experiencing renewed interest in our traditional buffet model and see strong interest in our PIE kiosk model from prospective licensees,” Bafundo said.