Taco Cabana and Pollo Tropical are turning up digital initiatives.

“Social geographic impact of some areas, especially in core [areas], is not a favorable today as it once was back in the heyday,” he said during the company’s August 7 conference call. “Chipotle is definitely a formidable competitor coming in, and they've identified South Florida as a market that they're coming in and they are coming into us.”

Pollo Tropical restaurants outside of the brand’s core area in South Florida—particularly in the Orlando market—performed better than those in Broward County and surrounding areas, but their performance wasn’t mighty enough to overcome sales cannibalization from new and existing restaurants that negatively impacted Fiesta’s comparable sales by about 120 basis points, the company said.

And Taco Cabana faced some geographic pressures as well. Fiesta representatives said in the call they believe sales decline in Q2 were largely due to heavy rains in the brand’s core state of Texas—storms that stole a large chunk of the brand’s important patio business.

Looking past Q2’s losses, Fiesta is working to target millennials after finding they rate Pollo Tropical and Taco Cabana higher than non-millennials on net promoter scores. Capturing the attention of this demographic means innovation in technology and elsewhere.

While DoorDash is available at all Pollo Tropical locations, the brand’s program hasn’t quite matured to match competitors and accounted for only 2 percent of Q2 total sales. Fiesta is looking to up delivery numbers to 10­–15 percent of sales moving forward. “Given that our food travels so well, we expect such sales to become increasingly incremental,” Stockinger said. Still, Fiesta is approaching delivery with caution—the DoorDash program incurs additional costs for Pollo Tropical, and delivery menu prices are rising in an attempt to cover the extra expenses.

Taco Cabana’s delivery platform doesn’t look much different. Delivery brought about only 1.5 percent of Q2’s total sales, and a new delivery menu is in the works for the taco brand that will also feature hiked to-go prices.

Another important digital push for Fiesta is its loyalty programs. Pollo Tropical launched the My Pollo loyalty app in December, offering guests an opportunity to earn redeemable points and receive real-time special offers reserved for members only. At the end of Q2 the app garnered more than 165,000 and the brand’s similar email club had an even stronger following with more than 530,000 members. “We are very encouraged by this adoption rate, as it will ultimately allow us to accumulate and analyze our guest preferences and purchasing practices, and in turn better target marketing efforts in order to provide guests with more customized and tailored experience,” Stockinger said.

Taco Cabana’s MY TC! loyalty app isn’t far behind Pollo Tropical’s sign-up numbers with more than 163,000 members, but their email list is less expansive at 322,000 people. Loyalty members usually ring up higher average checks than those who aren’t and Fiesta plans to “aggressively promote” the programs, Stockinger said. 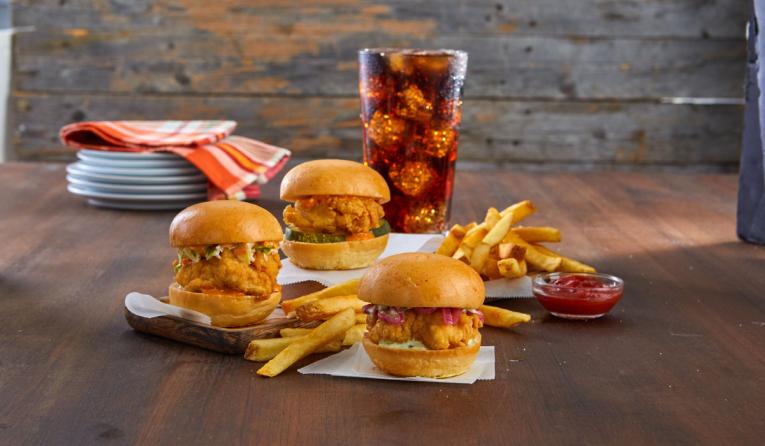 In-store technology is also getting a boost. In 2019’s Q1, Fiesta rolled out point-of-sale tablets in stores to improve speed of service and ease of ordering, and the group will also begin testing kiosk ordering moving forward. And the in-store updates aren’t only digital. At the end of Q2, Fiesta had opened one new Pollo Tropical and three new Taco Cabana’s, leaving the group with two more Pollo Tropical stores to debut to achieve its 2019 growth plan.

About $3 million is also budgeted for remodeling projects between 10­–13 restaurants in the remainder of 2019. These projects have just begun and will center on cosmetic improvements that are noticeable for guests—painting, new chairs and tables, improved lighting, etc. They will be implemented in the current and coming quarters to “better match interior to food quality,” Stockinger said.

Menu-wise, Fiesta spearheaded some liquid innovation in Q2 at Taco Cabana. The brand debuted its gold margarita with tequila during in honor of Cinco de Mayo plus a new Bacardi Gold Rum Runner cocktail. Blue margaritas on the rocks, frozen sangria swirls, and 60-ounce pitchers of beer on margaritas are some of the drinks in Taco Cabana’s test kitchen now, and menu development is extending past beverages; the brand is experimenting with adding carnitas, carne asada, and increasingly popular Beyond Meat products to its casual taco offerings, too.

In spite of Fiesta’s efforts with delivery, loyalty programs, store interiors, and menus, the group still touts a focus on value, and accessible price points figured heavily into Q2 for the group.

Fiesta’s goal of positioning Pollo Tropical as a strong B2B and B2C catering option pushed the brand to invest in some catering infrastructure during Q2, including catering hub units and new delivery vehicles.

Pollo Tropical launched the Parties by Pollo platform, a new catering menu, in July. The rebuilt list of offerings features lower prices for broader appeal, and aligns more closely with the brand’s retail menu. The new platform also places a greater emphasis on party platters of various sizes for family and other social gatherings. “While this program is still in its early innings, we are excited [about] the opportunities for catering programs going forward,” Stockinger said.

Taco Cabana’s catering program will follow Pollo Tropical’s lead in coming months; catering prices will be lowered and menu offerings will be realigned to fit more closely with the main menu. By the end of 2019, the group will have pumped about $1 million total into both of the brands’ catering programs.

Fiesta is also keeping its eyes on value with the brands’ main menus. Stockinger said that Taco Cabanas’ main focus was “value offerings” and, through its value platform Pollo Time, Pollo Tropical continued a Q1 deal during Q2 that offers a $3.99 quarter-chicken weekday lunch meal, a $5.99 half-chicken weekday dinner meal, and a $12.99 original family meal on weekends.