The concept is simple—serve flavorful grilled proteins atop bowls and wraps. But its growth strategy is even simpler—build a strong team and expansion will follow.
Fast Casual | October 2019 | Rachel Pittman

Coming off of a football career that started at the University of Oklahoma and continued through a couple of NFL teams, Gusto! founder Nate Hybl knew he wasn’t cut out for a nine-to-five career that would land him behind a desk after he retired from the field. He needed to follow another passion post-football, and he found that passion at the same time that he discovered a gaping hole in Atlanta’s quick-serve scene.

“My story is unique because I set out to invent a product that I wanted as a consumer. For most of my life I had been eating lean proteins, fruits, and vegetables, and I just thought, ‘Why can’t I go somewhere and get grilled chicken flavored a bunch of different ways?’” Hybl says.

In the South, fried-chicken options roost on every corner. But grilled proteins aren’t as common, and Gusto! offers something simple yet unique in the Atlanta scene; customizable bowls and wraps topped with either grilled chicken, shrimp, mushrooms, or fresh avocado. With five convenient locations in the metro Atlanta area, the concept has expanded at a steady pace since Hybl opened his first store in 2014, and the former quarterback doesn’t plan on slowing down anytime soon. In fact, he plans to double the size of the company by 2020.

Hybl says Gusto! is being grown organically, and the brand’s origin story is nothing if not organic. While Hybl had a clear idea of what he wanted to bring to life—simple grilled proteins paired with fruits, vegetables, and flavorful vinaigrettes and sauces, all served quickly and at an accessible price point—he didn’t have a business partner, industry experience, or enough funding. “I drove around in a busted minivan that I owned with my pots and pans and a grill, raising money to get the vision off the ground. I didn’t know what I was doing, so I just became a real student of what everybody else was doing,” he says.

The process of getting the brand’s business model down on paper and raising the necessary capital took more than three years. After Hybl rounded up the funding, he developed a menu that reflected the simplicity he had searched for as a consumer, with a flavorful twist: The Gusto! experience starts off with a team member asking the guest the brand’s tagline question: “What’s your gusto?” The customer selects a greens or grains bowl or a flatbread, adds one of the proteins, and chooses a “gusto,” or a signature flavor profile that dictates the toppings and tastes of their entrée.

The brand’s bases and proteins are simple, but its flavors range from Sweet Soy Sriracha to Chipotle Mango Avocado, and were developed by studying menus from across the world. The idea was built off of the word “gusto” itself; it’s a synonym of the word “flavor,” and asking “What’s your gusto?” adds a customization dimension to the brand’s simple concept. 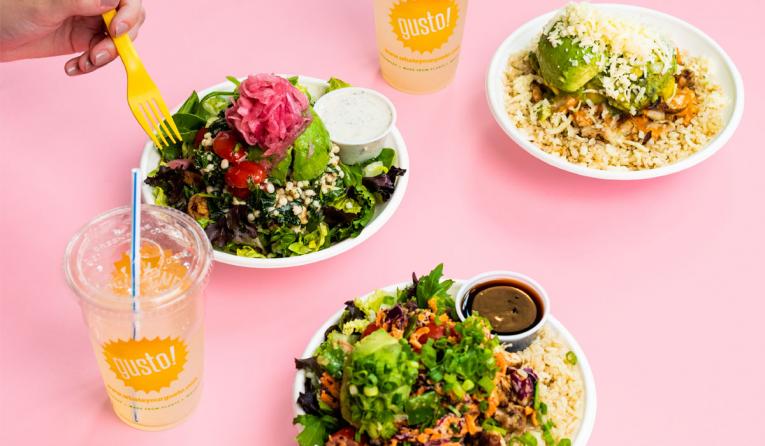 In addition to serving food that packs a flavor punch, Hybl wanted to make the Gusto! menu accessible. Operating in a city like Atlanta means that the brand attracts a broad range of customers—Hybl says the restaurants see corporate professionals, doctors, construction workers, and families all coming in to choose their gusto. The price point is fairly low for the value offered (a bowl or flatbread starts at $8.65), and the brand offers a kids’ menu too.

Hybl also looks for accessibility in choosing location, placing units in areas with high traffic and with residents who need quick, affordable dining options. His newest store in Chamblee, Georgia, even has a drive thru. Hybl says this new drive-thru model will likely become the standard for future units if it performs well at the new store, upping efficiency. “Drive thru is hot and heavy for us right now, and I think we have a chance to alter the landscape of fast casual,” he says.

Looking ahead, Hybl plans to keep the brand in Georgia as he shifts into high gear for his double-by-2020 growth plan. He says the brand could most likely open another five well-performing units around Atlanta before expanding into other regional markets. The growth strategy focuses on expanding the team first. The individual units are run by local operating partners—Gusto! employees who receive a yearly salary as well as the opportunity to lead a store. The brand is motivated by what Hybl says is a desire to be a different company, and looks to grow its team member base by offering benefits, team outings, and opportunities to continue education with financial responsibility and public speaking classes.

Gusto! hiring materials stress the word “heard,” highlighting a company focus on easy, open communication. The word has become a mantra for the brand, even popping up in Gusto! kitchens as a shorthand stand-in for “I’m listening.” This emphasis on communication is about creating an environment of respect, openness, and positivity among team members. “We have an extremely diverse team and we love that. We’re all about inclusivity. It’s not just all about paying as much as we can afford. It’s about building a unique culture. To me, it’s easy. It’s about investing in our most important asset, which are humans, and it works well for the company,” Hybl says.

21 Main Street, Suite 204
Hackensack
NJ
203-883-6060
SH Franchise Finance is an independent finance company, so we know what it is like (more)
Research Firms