Even with dine-in sales returning, the brand continues to break records.

While the near-term remains volatile, from vaccine pauses to potential variants and other unknowns, the recovery arrow is pointing upward for restaurants. Which brings a lot of operators, especially quick-serves, to a question of their own. Will the return of dine-in cannibalize digital gains made during COVID-19?

At Chipotle at least, it’s a query fueling optimism more than caution. In March, the brand set a company record for digital transactions, supported by its best digital order-ahead month in history. Some 800,000 people downloaded Chipotle’s app and it served the most new digital customers since May of 2020.

The results spark post-pandemic promise for the brand, CEO Brian Niccol said. Digital sales mix in April held around 50 percent, despite the fact all but 20 of the company’s restaurants are now open, with 92 percent of them offering in-restaurant dining with capacity limitations.

In fact, Chipotle’s digital sales are now slightly above its COVID peak from last year as it’s recovered roughly 60 percent of in-restaurant sales.

Credit a few levers, including Chipotle’s digital-exclusive quesadilla launch, which marked the brand’s first new customizable entrée in 17 years. Niccol said it represented Chipotle’s most-requested item by guests not on its existing menu. And although it’s only been out for about a month, it’s generating an incidence mix of about 10 percent.

More broadly, though, Niccol believes Chipotle’s digital longevity is a year’s-long result of evolving the company’s ecosystem from a commerce system to a “platform of engagement.” With convenience as the trigger, we’re talking everything from rewards to digital-only menu offerings to Chipotlanes and alternate store formats. And the infrastructure to streamline all of it. Mainly, second make-lines across the system (now called Digital Kitchens) to ensure Chipotle can deliver similar levels of speed, consistency, and experience across both sides of its business. In February, Chipotle said its second make-lines alone generated average-unit volumes of $1.1 million, which is more than a Dunkin’ ($968,000) headed into 2020.

“Consumer sentiment is definitely one where they want to get back out to socialize and get back into the dining rooms and have that in-dining experience,” Niccol said during a conference call. “And at the same token for those occasions that they've built the behaviors around digitally, those are remaining in the business.”

Chipotle’s rewards program is up to 21 million customers. About 60 percent of those are active, ongoing users. This is one area where the pandemic was good to the brand—it entered 2020 with fewer than 10 million members.

And it’s going to play a critical role in continuing Chipotle’s digital wins as habits shift, at least to some extent, to pre-virus norms.

Today, Chipotle doesn’t see a ton of crossover between its dining room and digital experience. There’s only 10–15 percent of guests doing both occasions. “So there's still a lot of upside in getting our dining rooms reopen for that customer experience, customer occasion, and that's why … I'm still optimistic about our dining rooms reopening. Because it's not cannibalizing from our digital business,” Niccol said. “These are really two distinct occasions that people want to have access to great food with integrity.”

Digital has become a massive business, too, and likely why the brand continues to guide AUVs above $2.5 million, 6,000-plus units, and restaurant-level margins higher than 25 percent as long-term targets. 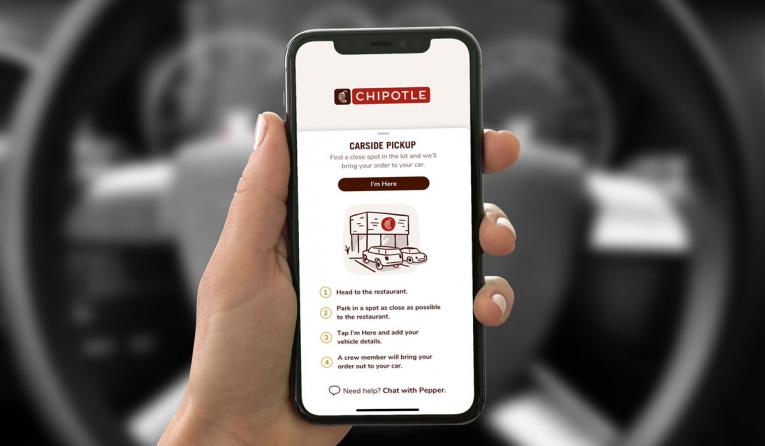 Chipotle CEO Brian Niccol said the company is "regularly making enhancements to our app, website, delivery and group offerings to support the current and expected future growth within this channel."

What’s important here, however, is Chipotle’s overall digital mix has remained relatively stable for three quarters. But in Q1, the company’s highest-margin transaction—digital pickup orders—represented slightly more than half of digital sales. Within its delivery channel, about 40 percent of orders came through Chipotle’s app or website (the remainder flowed through a handful of partners).

Chipotle took another 4 percent in delivery pricing in Q1 to offset cost pressures. CFO Jack Hartung said that while this doesn’t get a delivery transaction to where it offers the same margin as an in-store one, and certainly not an order-ahead one, “it gets very, very close.”

“Within striking distance,” he said.

“We made a lot of progress over the last year and we've taken these increases along the way,” he said. “We've seen acceptable resistance and we've also seen what looks like people shifting channels. Because it does look like our order ahead moves up when we do see customers maybe resist the higher pricing in the delivery channels a bit.”

That latter point is something Chipotle is actually courting. Before the 4 percent hike, Chipotle delivery cost guests 13 percent more. Again, the kickback from a 17 percent price increase is “acceptable resistance,” Hartung said, since it doesn’t stonewall customers and leave them without an option. They head to value-driven channels instead.

“We're providing lots of access, lots of convenience with a very powerful brand position behind us,” Niccol said. “And that's why I think you're seeing our order-ahead business continue to grow, our white label or delivery business in our app continuing to grow as a percentage of the delivery occasion, and I think it's just a function of the brand continues to resonate.”

And one of those, increasingly, is Chipotlanes. As of March 31, Chipotle boasted a total of 196 stores with order-ahead pickup lanes, including five conversions. Trailing 12-month Chipotlane restaurants continue to drive 17 percent higher overall digital sales versus non-Chipotlanes. But more notably, order ahead is nearly 80 percent higher. And delivery—Chipotle’s lowest-margin transaction—is about 30 percent lower.

Those are metrics Chipotle will chase, especially since these units debut at 15 percent higher sales.

The brand opened 40 restaurants in Q1, more than double the number brought to market this time last year. Twenty-six of those included a Chipotlane. The company expects to open roughly 200 new locations this year, with more than 70 percent including the feature.

BTIG analyst Peter Saleh sees vast runway. "We continue to believe there is substantial opportunity for Chipotle to convert existing restaurants to Chipotlanes and this could be another sales layer in coming years," he said Thursday in a note. "We estimate that Chipotle operates approximately 400 free-standing and nearly 1,600 end-cap restaurants, many of which could be candidates for conversion ... Management did indicate that landlords have been receptive to these conversions, though for units toward the end of their primary lease term rather than the beginning."

One thing to keep an eye on as well—Chipotle opened a British Columbia restaurant recently in Surrey, which marked its first new Canadian store in three years. Hartung said it signaled the start of an accelerated Canada push, which will include its first Chipotlane opening in late summer.

Ultimately, the brand believes it can open “a least a few hundred restaurants in Canada,” as their unit economics approach U.S. stores.

Niccol said Chipotlanes “have revolutionized the drive-thru experience toward order ahead for pickup transactions” at the brand.

Chipotle continues to tinker with data and its ability to engage guests. “Communications to our customers are individually tailored so that specific customer activities prompt targeted responses,” Niccol said. “Each digital message can vary along the customer buying journey such as the latest promotional offer on a new menu item or a more targeted offer to entice a customer that has not visited our restaurant for a certain period of time.”

For instance, customers received communication about Chipotle’s quesadilla launch featuring their favorite protein based on their ordering history.

“A lot of new users coming to the business through the quesadilla proposition and then our existing customers, we're also seeing them utilize that quesadilla platform as part of a new eating occasion,” Niccol said. “So it was actually our highest penetration of new customers in the month of March, which I think just a testament to one, people coming back to the dining rooms and two, I think a really meaningful innovation around quesadilla.”

Diluted earnings per share came in at $4.45. The brand also closed five restaurants against its 40 openings in the period.

As of March 31, 2021, Chipotle had nearly $1.2 billion in cash, investments and restricted cash, and no debt. Restaurant level operating margin was 22.3 percent in Q1, an increase from 17.6 percent, year-over-year. The improvement was driven primarily by leverage from the comps lift and menu price increases, partially offset by increased delivery expense and wage inflation, the company said.

Moving forward, Chipotle’s expects Q2 comps to run in the high 20s to 30 percent range, as the industry continues to compare against some of the most challenging months in sector history.