This Isn’t the Chipotle You’re Used To

This past year, the fast casual rewrote its playbook. And the results followed.
Fast Casual | February 2020 | Danny Klein

Chipotle's sales continue to rise in recent quarters. And it's about to replace queso with Queso Blanco.

“I really do believe our operations are running better than they ever have been,” Niccol said Tuesday afternoon. “We saw an opportunity to be even better.”

When Niccol took the reins in March 2018, he identified five avenues of potential: Take a brand with unique guest affinity (some of it in need of repair) and make it more visible and positive; implement a stage-gate process for innovation; leverage digital and expand accessibility; engage guests through a loyalty program that didn’t exist yet, at least to any effective model; and run better restaurants, anchored by culture.

How Chipotle is winning the 'talent crisis'

Zeroing in on the ops focus, Chipotle had enormous whitespace in terms of throughput and opening additional points of purchase. So, the brand spent much of 2019 upgrading restaurants with digital pickup shelves, tech-enabled second make lines, and expanding delivery to more than 98 percent of its store base. It also worked on GM retention and reduced turnover at the level by about 35 percent in 2019, Niccol said—a move that improved Chipotle’s max 15-minute throughput 10 percent.

Put together, these efforts spiked Q4’s report. Digital sales hit $282 million, which is a 78 percent jump from the prior-year period. The segment now accounts for 19.6 percent of Chipotle’s total sales—a billion-dollar business that has quadrupled in just three years.

Yet beyond this figure simply bouncing off the bottom, which is an accurate way to look at it given the lack of systems previously, Chipotle expanded the opportunity impressively over the past fiscal year.

For perspective, Chipotle collected $262 million in digital sales in Q2 (a period it rose 99 percent, year-over-year). That was more than Chipotle produced in all of 2016. Also, if you go back to Q4 2018, digital mixed only 12.9 percent of sales.

“We're delighted that we're closing around 20 percent, but that's not the end of this journey,” Niccol said. “That's just one of the stops on our journey to, I think, a much bigger business than where we are today.”

Average-unit volumes are also up to $2.2 million, with restaurant margin reaching 20.5 percent. The brand’s AUVs were $2 million at the end of 2018. Chipotle’s robust 13.4 percent comp comprised of a 5.4 percent increase in average check in addition to the traffic—2 percent of which was price. The rest was mix, “which means we’re cooking more food as well,” CFO Jack Hartung said.

Chipotle opened 80 restaurants in Q4—a quarterly record for the brand. It also relocated one location and closed three. Of those, 46 included “Chipotlanes,” which brought the chain’s total number of mobile pick-up windows to 66 at year’s end. Chipotle opened 140 units in 2019 (seven closures and two relocations) to reach 2,622 total restaurants.

In 2020, Chipotle plans to bring 150–165 locations to market, with more than half including a Chipotlane.

This is the kind of initiative that defines a new era for Chipotle, and explains why the runway is surprisingly wide for a brand with 2,000-plus locations and 27 years of history. Additionally, why its stock gained nearly 70 percent in the past year. 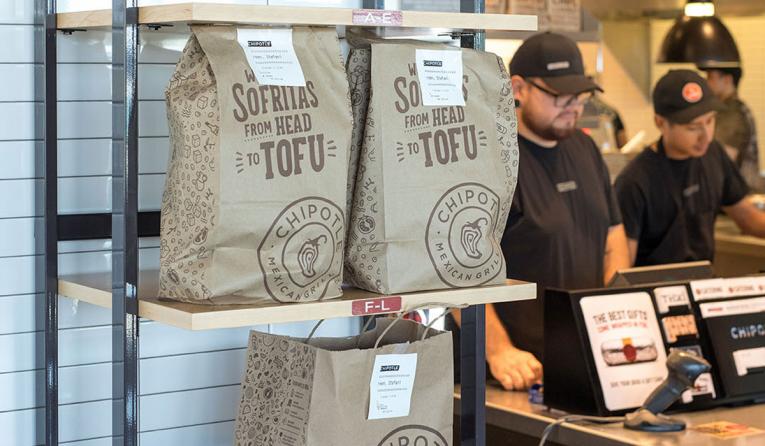 Chipotle spent much of 2019 getting its digital tools in place, like pickup shelves.

Chipotle long rejected the notion of the drive thru prior to Niccol’s appointment. But now, it’s something the brand is simply adding to its digital flywheel. “Customers love the fact they don't have to get out of their cars as well as having a pickup time that is significantly faster than a traditional drive thru,” he said.

To date, Niccol said Chipotle has witnessed overall digital penetration for Chipotlane restaurants in the high 20s, with the majority of that driven by a higher margin, order-ahead and pickup transaction. That latter part is important. Chipotle will more than double the number of pick-up lanes in 2020 not just because it fits today’s convenience-crazed dynamic, but also because it strengthens its economic model by making a higher-margin channel more accessible.

Think third-party delivery, and the balancing act of keeping it viable.

Niccol said it’s a “little bit of a misconception” that the majority of Chipotle’s digital sales growth is coming via third-party delivery. He believes the service serves, in many cases, as an entry point for customers to see Chipotle in a new, convenience-forward light.

In other terms, they use delivery to break into Chipotle’s digital system, and the brand then sees gains in its order-ahead business as well. And the process starts to circulate throughout the company’s other efforts. “Delivery is proving to be just a great experience for people that maybe didn't have that occasion with Chipotle in the past,” Niccol said, speaking to the incremental nature of the business. “Now they believe it's convenient so they can have those occasions with Chipotle, both order ahead as well as delivery. So it's working nicely as a system between rewards, order ahead, delivery, and now with Chipotlane.”

When people get through the digital door, they're greeted by multiple paths. That’s Chipotle’s hope. And it will be critical in 2020 as some of the free deals lap and become less prevalent.

Also, Niccol noted Chipotle’s value proposition allows for room to pass along delivery costs to customers in the future, if needed. Today, the brand is more in acquisition mode, using delivery as a tool to get people into its digital ecosystem. But there’s price elasticity still to improve the delivery economics. Chipotle works with DoorDash and Postmastes.

The digital growth is physically manifesting for Chipotle, too. The company announced in December it was testing a tech-centric prototype in four new units of the following types: an urban store front, standalone restaurant with a Chipotlane pick-up window, and an endcap location with a Chipotlane. One features a walk-up window across from Wrigley Field in Chicago. It’s a smaller, 2,000-square-foot format with fewer seats, a customer-facing grab-and-go beverage case, and digital pickup shelves near the front door. 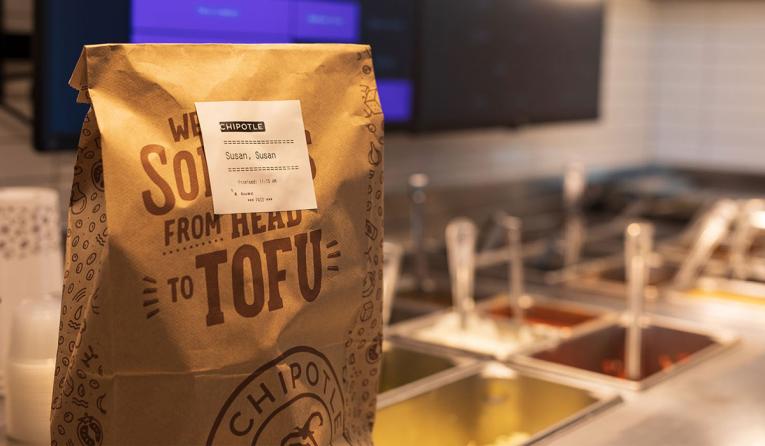 Raising awarness to its digital platforms has been key for Chipotle's growth.

But let’s turn the rewards element, which is well suited to capitalize on the tools in place. Chipotle spread the platform nationwide roughly a year after Niccol started. It was a long-awaited move following Chipotle’s 2016 “Chiptopia” program, an effort it famously spent millions on. The company tried a summer-focused, three-month promotion tied to the number of times customers visited. By the end of the first 30 days, it had more than 3.6 million participants and accounted for 30 percent of transactions.

However, Chiptopia presented a structure that gave guests free meals after their fourth, eighth, and 11 visits. So if people bought 12 burritos over three months (four a month), they would be eligible for four free burritos. Or a 33 percent return rate that hurt Chipotle’s bottom line. The chain forked out about $20 million to more than 85,000 Chiptopia members who qualified for the top reward—a catering packaging for 10 worth about $240.

Basically, it just gave away a bunch of burritos. It did little to inspire loyalty long-term. It was a perception tool.

The company’s more standard, points-driven platform arrived in March and already has more than 8.5 million enrolled members, making it “one of the fastest-growing restaurant loyalty programs in history,” Niccol said.

And while Chipotle focused on member growth in 2019, it plans to spend this coming year optimizing the use of its database marketing to incent behaviors as it builds out CRM capabilities. “Personalization and engagement are the cornerstones of our evolving loyalty strategy,” Niccol said.” We are encouraged by the early signs of transaction increases across all frequency bands. We expect this lever to become a bigger driver in the future as we gain more experience gathering customer insight while continuing to expand our digital ecosystem.”

The personalization is really just getting started. Chipotle’s rewards program is maturing now to where customers are redeeming offers and redemptions are starting to offset deferrals.

A key moving forward, though, is how Chipotle will leverage these one-to-one marketing efforts to continue another recent push. The brand continues to allocate marketing dollars, Niccol said, so it can drive purchases without using discounting as a crutch. Marketing combined with CRM is a “real opportunity to growth the business, both with new users and existing users,” Niccol said.

"We believe the deliberate shift to more personalized marketing for loyalty members this year has the potential to materially increase frequency and spend, while at the same time reducing promotions such as free delivery," BTIG analyst Peter Saleh wrote Wednesday in a note.

Chipotle’s “For Real” TV campaign was designed to increase transactions and grow sales by promoting culture, improving awareness, and bringing customers back to Chipotle’s core ingredient-heavy positioning. “Our various marketing initiatives across both traditional and digital channels were successful in attracting new users to Chipotle as well as motivating existing customers to come more often,” Niccol said. “Importantly, we saw healthy transactions growth in 2019 without relying on short-term promotions.”

"We will be a part of culturally relevant events, and we have an always-on social and digital program," says CEO Brian Niccol.

Chipotle’s marketing budget in 2019 was relative to its 2018 one at 3 percent of sales, but the promo portion was reduced 15 percent following a sizable cut the previous year as well.

Niccol said expect much of the same in 2020. “Chipotle will continue to have a presence in national media where and when it makes sense. We will be a part of culturally relevant events, and we have an always-on social and digital program. Our marketing efforts this year were elevated because we used the stage-gate process to develop innovation that leads food culture and meets guest requests.”

Goodbye queso (as you know it)

Another changing Chipotle characteristic centers on the menu. And that goes back to Niccol’s aforementioned “stage-gate” process. The brand brought a Supergreens salad mix to the lineup in January and is considering making carne asada permanent if it can iron out supply chain details.

Coming soon, though, is Queso Blanco, which will replace Chipotle’s existing queso, Niccol said. He said the goal moving forward is to introduce one to two fresh menu items on average, per year. Quesadillas and beverages are currently being tested in various markets.

“As I mentioned before, we're not going to be moving to a place where you're doing something every 4 to 6 weeks. That's not our business,” Niccol said. “That's not who we are. You can expect us to do 1 or 2 of these initiatives on the menu because it's the right cadence for operators to execute really well. And it's also the right cadence, I think, to give our customers the variety that they're looking for in our business.