Jon Smith Subs Has Lofty Goals, and Plans to Meet Them

The sandwich chain has the backing of an experienced franchising group.
Fast Casual | September 2019 | Danny Klein

Jon Smith Subs has been around more than three decades.

In 30-plus years, United Franchise Group put together a portfolio of 1,600 or so franchises in 80 countries. But one thing was missing—a food enterprise. Roughly three years ago, the West Palm Beach, Florida franchise empire, led by CEO Ray Titus, remedied that when it acquired Jon Smith Subs. Before the deal, UFG mostly operated in the business-to-business service provider space, with brands such as Signarama and Transworld Business Advisors.

UFG created a food division last year, and brought in a second brand in to scale—The Great Greek Mediterranean Grill.

The company also picked industry vet Jim Butler, who was a regional VP at Signarama, to head up the direction. And he’s now guiding what the company calls “lofty plans” for 2019, with more to come.

Jon Smith Subs, founded 1988 by its namesake, opened its first franchise late October 2016 in Wellington, Florida. It’s since expanded to 26 locations (five international). Butler says another 35–45 are in development “as we speak,” and Jon Smith himself owns six corporate locations.

Butler says the brand can turn “lofty” into reality because of its infrastructure, which is backed by UFG’s sizable resources—something many chains of this size can’t claim.

“I think when a lot of people see the backing of United Franchise Group, I think that adds a lot of credibility to Jon Smith Subs,” Butler adds. “They know we know how to build brands. Once they taste the food, then it’s a question of selling them on our culture and our vision.”

And the fact the concept was 30 years old when UFG bought it also provided framework for growth. “We already had the recipe to success,” he says. “We just had to learn how to duplicate it.”

Butler says he believes Jon Smith Subs will scale exponentially once it gets running. This includes “untapped” international runway. UFG is already in 80 countries with other brands and can pull from that experience. “So it makes anytime we bring a new brand to market, those operators are going to be the first ones to look at it because they have the infrastructure to grow companies as well,” Butler says.

Jon Smith Subs is already in Portugal, England, Panama, Chile, and Australia. The latter could open 10–12 stores within the year, Butler says. 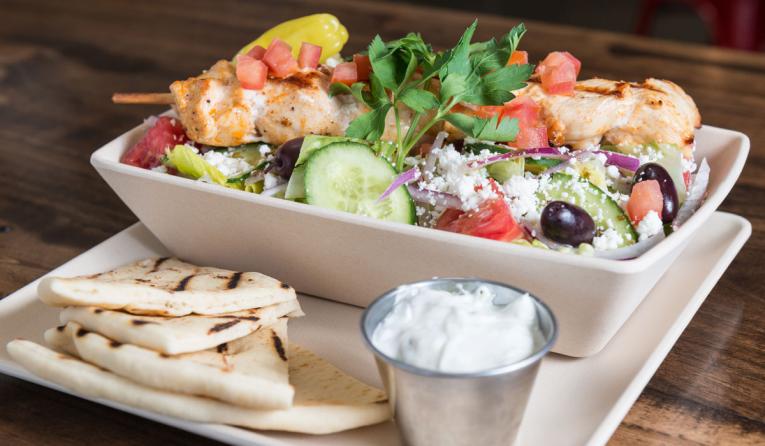 UFG says it's sold 75 or so franchises for The Great Greek.

Butler says the brand isn’t looking for geographical operators as much as its searching for the right fit—people who can help the brand grow. “I would say somebody who doesn’t necessarily have to be in food, but they’ve run businesses before,” he says. “And we know with both brands that we’re on to something big because we are attracting those people who are multi-unit owners who want to add to their portfolio.”

As for The Great Greek, Butler says UFG has seen no shortage of interest. In the 20 or so months since they’ve franchised the brand, founded by Nick Anthony Della Penna and Trent Jones, the company has sold about 75 franchises, he says.

The 11-unit chain, which is in Texas, Nevada, Michigan, Florida, and Colorado, skews higher end fast casual. Food is served on plates with silverware. There are no trash cans in the front of the house. Guests place their order at the counter and then are served at the table. “We want it to be a true dining experience, but with a fast-casual setting,” Butler says.

When UFG acquired The Great Greek, it was pushing stellar numbers. Della Penna, a third-generation restaurateur, had 20-plus years of experience, including serving as VP of food and beverage at the Excalibur Hotel and Casino. Along with Jones, a real estate and small business entrepreneur, the duo bought the first location in Henderson, Nevada, in 2011. During their first year of operation, the company said, gross revenue jumped 18 percent. In 2017, it was $1,546,137. The second store—in the southwest area of Las Vegas—opened that year.

Heading into the deal, through the fourth quarter of the previous year, The Great Greek’s daily sales were tracking nearly 30 percent higher than the original location, with the average monthly revenue of the two stores at $143,690 in 2017.

Butler says the brand could scale overseas, too. “We have two good opportunities in the food space right now,” he says. “There’s plenty of room to grow.”