How the burger brand is growing could shake up the fast-food landscape.
Fast Casual | January 2020 | Danny Klein

Shake Shack has previously set a target of 450 systemwide restaurants.

It can be easy to forget Shake Shack is still in the very early innings of its growth. Today, 60 percent of the burger chain’s domestic units are less than three years old. Twenty-four percent have been on the market for 12 months or less. The average age of restaurants across Shake Shack’s 163 U.S. corporate system (there are another 111 licensed units) is just 2.9 years. Strikingly, twenty-three of the fast casual’s 31 markets have five or fewer locations.

And this is only capturing the domestic picture. Globally—a path Shake Shack approaches via licensing—there are 22 stores in North America, two in Mexico, three in Turkey, 40 in the Middle East, one in Singapore, five in Hong Kong, two in the Philippines, three in Shanghai, 14 in Japan, and 11 in South Korea. Much of the international map remains wide open (mainland China growth will ramp up in 2020 with a mid-year entry to Beijing).

Shake Shack’s expansion, rightfully, gets talked about mostly from a corporate perspective. But if you look back to 2015, there were 44 stateside company-run restaurants and 31 licensed. That gap has widened over time. Yet Shake Shack's licensed development has tracked steady.

In this coming year, Shake Shack expects to open 40–42 corporate units and 20–25 net licensed, continuing the above trend. The international whitespace accompanies interesting U.S. developments near-term for Shake Shack, which started 19 years ago as a hot dog cart.

The reason being its immediate growth looks pretty different than what we’ve witnessed in recent years. As CEO Randy Garutti put it, the chain spent the last few gaining a strong foothold in major cities nationwide. With that foundation laid, however, it’s time for Shake Shack to shift focus to greater existing market penetration. Fewer new-market entries and more attention spent to rooting brand awareness and filling real estate around established restaurants.

Shake Shack’s stock popped throughout last week following its presentation at the ICR Conference in Orlando. And this infill factor was a major culprit.

Over time, concentric growth should allow Shake Shack to curb expansion costs to a degree and balance average-unit volumes. By November, the brand’s trailing 12-month AUVs were $4.2 million, with average weekly sales of $80,000. As Shake Shack broadens sales volumes by opening across the country and expanding further in existing markets, these average unit metrics will experience gradual declines before leveling off. It targeted $4.1 million for the full fiscal calendar.

The dynamic slide two ways, really. Adding more stores to a trade area opens the cannibalization conversation. Yet it also speaks to improved brand awareness and less reliance on marketing. Not to mention aiding delivery and off-premises business by widening Shake Shack’s coverage radius for people staying at home. That’s why site selection will be key (more on this later).

By building out from a market base, Shake Shack will also have the opportunity to support and gradually leverage existing infrastructure. This includes operations, training, marketing, and supply chain connections. 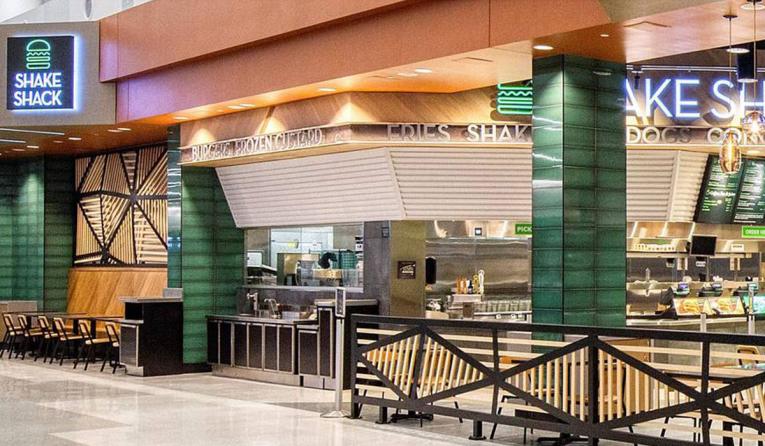 Shake Shack’s total revenue lifted from $191 million to $567 million in that span. Total systemwide sales rose to $839 million from $295 million and cash flow from operations hiked from $41 million to $96 million.

To dress it down, what we’re seeing now is one of the quick-service industry’s fastest-growing systems start to mature. And that’s something competitors should take notice of.

In some respects, real-estate agility that mirrors Starbucks’s path to coast-to-coast growth (Shake Shack has no intention of getting this big, though).

In 2019, Shake Shack built across a mix of formats, evaluated others, added a number of premium food courts, and expanded in outlet malls. This coming year, as well as 2021, expect to see Shake Shack grow via urban, freestanding pads, shopping lifestyle centers, and test several other options along the way, including smaller-footprint designs that increasingly integrate digital ordering and an improved pickup experience.

You can see this model unfold today in Shake Shack’s original and most established center—New York City. The Big Apple holds that claim from an awareness standpoint, at least, despite the fact eighty-five percent of the brand’s units are located outside NYC.

Shake Shack renovated a Theater District location last year, one of its busiest, and planned to do the same for units on the Upper West Side and Grand Central Station. Why mess with a working model? Because Shake Shack has the brand equity in NYC to think a step ahead of day-to-day survival. These restaurants are being updated to improve layout and ensure optimal flow from multiple ordering channels, like delivery. Kitchen equipment is being upgraded to maximize throughput. Kiosks added to further convenience elements—an important note for a brand that doesn’t always compete on ticket times with some of fast-food’s biggest players.

Shake Shack’s design is evolving for the digital journey, the company said at ICR. Its digital and in-store experiences are converging. For Shake Shack, this means front-of-house flow increasingly separating order-ahead channels. Again, more kiosks. And the noted iterative design and renovation process unfurling in NYC. 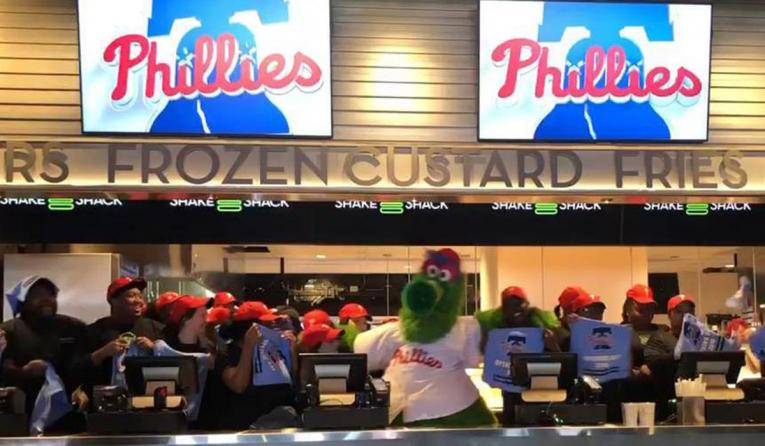 And this is something that could potentially now happen in other markets, too, as Shake Shack builds deeper footprints.

And zeroing on digital growth, kiosks are currently in about a third of Shake Shack restaurants (about 40 or so at Q3’s end).

But one headline that grabbed investor attention at ICR was Shake Shack’s comments around its Grubhub migration. While the brand said it completed point-of-sale integration, it’s only migrated to Grubhub as the sole third-party provider in 40 percent of stores.

That means 60 percent of Shake Shack’s restaurants still feature at least one other, probably more, delivery aggregators flowing into its operations. Shake Shack will remove the additional vendors from its platform over time. “However, even after that happens, we see a strong case for the other aggregators to still offer [Shake Shack] delivery,” analyst Katherine Fogertey wrote in a note.

Throughout 2020, Shake Shack plans to unveil other programs related to the Grubhub partnership.

It previously cautioned disruption from this integration, saying the switch would dampen delivery revenue early, especially in markets where Grubhub doesn’t dominate share. Shake Shack built up region-by-region customer habits through other platforms over the past two years.

So why make the exclusive change and what’s the benefit? It’s another long-game journey lever for Shake Shack.

The exclusive deal includes guest data insights and the POS integration, which is critical to preventing bottlenecks in already high-volume stores. A seamless connection enables Shake Shack to throttle delivery orders in real time. Also, Grubhub agreed to make a significant contribution in marketing dollars with the partnership—something that began with targeted communications and campaigns. It’s a big change from the mostly partner-based and marketplace-driven messaging of old.

Yet in the end, food quality and guest experience turned the dial for Shake Shack. With so much intrusion in the delivery space, the brand recognized the need to collect data and learn about its guests, and then figure out how to harness that information. 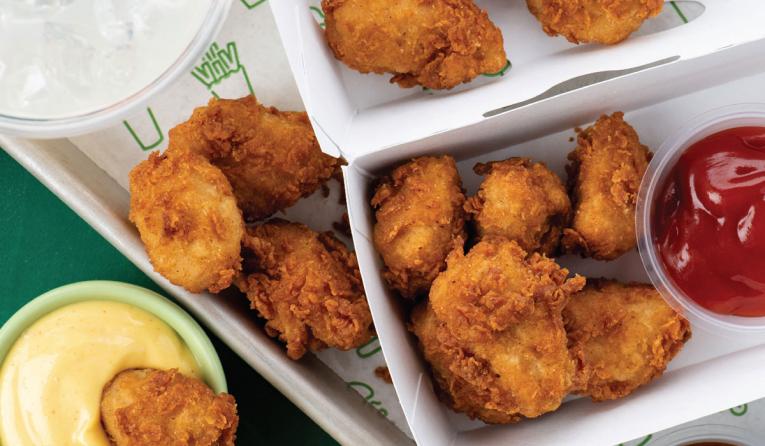 Goldman Sachs fueled Shake Shack’s stock surge January 15 when it forecasted a menu-driven same-store sales bump in coming quarters. Recently, the brand reintroduced its popular Shackmeister (crispy shallots and ShackSauce on an Angus beef cheeseburger) to U.S. menus from January to March, and said at ICR Hot Chickn’n would be coming later in the year along with the introduction of Hot Chick’n Bites, a play on Shake Shack’s popular Chick’n Bites. These are arriving mid-2020.

Goldman wrote that some investors were concerned Shake Shack would take these items off the menu due to operational complexity and costs. Instead, the chain is expanding further with innovation. Chicken, generally, is a high-cost item in Shake Shack’s commodity basket given its antibiotic standards. From a menu perspective, Garutti said previously that 2019 was “mostly entirely” about Chick’n Bites. “We really want to make sure with so much of the business changing and so much of the flow in the Shacks and the food moving in and out of Shacks has been the biggest concern for us and something we still need to work a lot on,” he said. “So we're going to be working on those things. That's really going to be the biggest part of our goals for menu innovation.”

The product, to date, has resonated with guests. But there have been some consistency concerns in the supply chain, along with trying to get costs in line. In Q1, Shake Shack saw paper and food costs rise 140 basis points to 29.5 percent of total revenue, which promoted a 1–2 percent price take on some menu items, including the Chick’n Bites. They bumped from an initial promotional price of $4.39 to $4.99.

So, the notion that Shake Shack plans to expand this platform is a welcomed sign for investors hoping for a top-line boost in 2020.

Additionally, Shake Shack said it planned to run a limited-market test later in 2020 of a Veggie ShackBurger made with 13 vegetables, herbs, and grains. “We’re all talking a lot about plant-based proteins—how is Shake Shack thinking about this? The same way we’ve always thought about food—real ingredients making better versions of classics,” Garutti said.

The Wendy's of the Future has Officially Arrived
Former Wingstop CEO Looks to Turn Salad and Go into Category Leader
Is a Golden Era of Fast Food Upon Us?