Labor, Digital, and the Continued Evolution of Shake Shack

The iconic burger chain has a long way to go before it hits 450 restaurants.
Fast Casual | August 2018 | Danny Klein

Shake Shack’s potent growth map has some short-term drawbacks. For starters, a delay in restaurant openings—just a reality in this expansion conversation—is slowing revenue growth in 2018, which kept the company from raising its guidance, and, in turn, disappointed some investors after Thursday afternoon’s second-quarter review. There’s also a long-term strategy unrolling across the brand as Shake Shack aims to more than quadruple in its unit count in time.

Shake Shack started as a single hot dog cart in Manhattan’s Madison Square Park 17 years ago and now has 102 company-run domestic units. It set a goal of 200 U.S. stores by the end of 2020 and 450 as a distant, but reachable target. Shake Shack is on track to open 32–35 domestic units this year, giving it 122–125 by the time 2019 rolls around. More than 70 percent of those openings are slated for the second half of the year due to delays such as a shortage of labor, construction equipment, and prolonging permitting issues, Shake Shack said. And about 20 percent of these 2018 locations will launch in new markets. This chart provides insight into why the current infrastructure changes taking place across Shake Shack’s system are so vital; It’s the foundation for a once-regional, cult brand to crash onto the national scene.

CEO Randy Garutti broke down some of these initiatives during an August 2 conference call. Shake Shack reported a total revenue increase of 27.3 percent to $116.3 million in Q2, year-over-year. Same-store sales lifted 1.1 percent versus the prior-year period. Earnings per share came in at 29 cents, which beat Thomson Reuters’ estimate of 18 cents. Revenue topped expectations of $111 million. As mentioned before, Shake Shack maintained its full-year revenue forecast of $446–$450 million, whiffing Wall Street’s hope for $452.3 million, news that dipped shares more than 5 percent in extended trading. Shake Shack’s stock has risen 31 percent in the past three months.

Historically speaking, Shake Shack has bucked the quick-service trend a bit by relying on menu innovation, menu mix, and menu shift to drive check, selling higher-priced items while opening new stores to boost comps. This quarter saw same-store sales consist of a combined increase in price and sales mix of 3.7 percent offset by a 2.6 percent decrease in guest traffic. Garutti said, even as digital becomes an increasing part of this equation, that strategy won’t change as Shake Shack looks to menu innovations to drive frequency and increase sales. 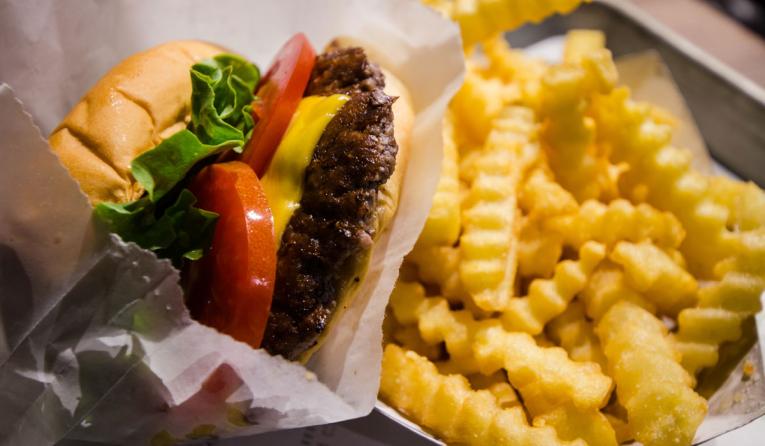 Come September, Shake Shack will open its first innovation kitchen connected to its new home office in Manhattan. “It will be here that you'll see us test new ideas, launch new menu items, innovate around kitchen design and simulate our digital initiatives in an environment just downstairs from our home office team,” Garutti said. In Q2, Shake Shack also launched its first veggie burger in select test locations. It has since expanded to 18 restaurants in New York, California, and Texas. A barbecue lineup, featuring smoky Cheddar cheese, arrived in May, and the Hot Chick-n is coming in fall.

Shake Shack announced Thursday it on pace to become the latest major brand to abandon plastic straws, with a goal to eliminate them from the entire domestic system by 2019. “We're constantly thinking about packaging and how we can reduce, reuse and make more of it recyclable. This remains a larger goal for us as we look ahead,” Garutti said.

Last quarter, Shake Shack spoke about its evolving digital strategy. Mainly, how it gleaned from a kiosk-only Astor Place opening that some customers weren’t quite ready to blanket the entire ordering process with digital. Yet Shake Shack’s labor concerns, especially as it targets some of the highest wage markets in the country, makes the process a critical one. To date, Shake Shack had equipped five additional restaurants with a combination of kiosks and cashiers. “We're learning how the kiosk experience changes the floor and for the house, the extent to which it impacts speed of service, kitchen throughput, how it best enhances the guest experience, ability to deliver labor leverage in the future and how ordering behavior may be impacted,” Garutti said.

Here’s an example of why this is so pressing for Shake Shack. The brand has an opening slated for Nashville, Tennessee, where minimum wage is $7.25. But given the labor climate, where unemployment is at it lowest level since early 2000 (3.8 percent), Garutti said Shake Shack understood it couldn’t simply get in line and hope people showed up, let alone remained invested for the long-term. So, in this case, Shake Shack is starting its employees at $13 per hour from day one. “But that's a high rate, right? It impacts our labor line over time,” Garutti said. “We have a number of our markets in the most expensive wage rates in America with New York City, California, D.C., Chicago, the Northeast. I mean, all of our major markets are increasing, going to continue to increase. So what are we doing about it?”

Labor and related expenses as a percentage of Shake Shack sales increased roughly 80 basis, points year-over-year, to 26.3 percent in Q2, driven by increases in minimum wage legislation and the introduction of restaurants.

"This is 17 years into making the story, and this question has never been an easy one. And I'm pretty certain that 10 years from now when we're talking, it will still be a hard one. It just got different flavors right now." — Shake Shack CEO Randy Garutti on the labor concern.

Other than being a “great employment brand,” with solid benefits and starting rates, Garutti said Shake Shack is making sure it offers opportunities for employees to develop and climb the company’s ladder. It’s also thinking about how to schedule and work with today’s gig workforce where people demand more flexibility. But, yes, the kiosks are also a major factor. Garutti said a long-term goal of kiosks is to decrease the payroll over time.

There are no plans to further roll out kiosks this year. Six restaurants in total feature the platform so far. Getting the model right is goal No. 1 before adding more. “I will say we've gotten some of our highest marks from our guest surveys on the experience of the kiosk even versus our other channels with which you can order,” Garutti said.

Garutti added Shake Shack approaches the labor concern differently by market. Some areas the company will pay above minimum wage; others, like top-line markets such as New York, it will start at the figure.

“But again, our goal always with our team is to get you out of that wage, get you to a shift manager wage that's materially higher, get you into a promotion, get you to manager. And that's been the method that we really use here,” he said. “Look, it's a changing economy. It's hard. It's always been hard. We've been selling Shack burgers and hotdogs since 2001. This is 17 years into making the story, and this question has never been an easy one. And I'm pretty certain that 10 years from now when we're talking, it will still be a hard one. It just got different flavors right now. So we're doing our best to react market-by-market. The best way we can do that is hiring great leaders that provide a great work environment, and we'll work on it. But there's exterior pressures that continue to grow.”

Back on the digital front, Shake Shack launched its first mobile app about 18 months ago. Recently it introduced ASAP ordering across the vast majority of its restaurants. Garutti said, as the percentage of the chain’s app sales increase, it’s delivering a higher average check in-store. Additionally, new restaurants that typically open with a higher percentage of app sales are giving the brand confidence that early adoption can lead to a higher use of digital ordering, he said.

Toward the end of the year, Shake Shack also plans to expand its digital ordering capabilities with the addition of browser-based ordering for mobile and desktop. “This will be a new channel for us and expands our availability to guests who wish to order digitally, but may prefer to do so outside of the app,” he said.

Shake Shack has been testing delivery with partners since September of last year, and is still considering a formal partnership but is “committed to remaining patient until we believe the entire guest experience is of the highest quality, operationally efficient to our Shacks, and with economically beneficial terms over long-term.”

“We've got new packaging happening. We've got new packaging coming,” Garutti said. “There's a lot of different ways we're thinking about how to get a French fry to your home as well as we possibly can. How to get a frozen shake to your home in a way that you're excited about it? So we want to work on all those basics first to make sure the foundation of it is there.” 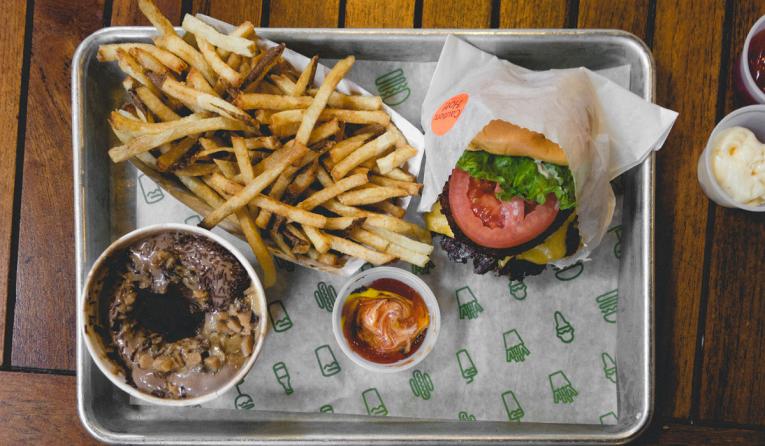 Shake Shack has a target of 450 restaurants in time.

Expansion on the mind

Breaking down the development, 50 Shake Shacks were included in this quarter’s comps base. So the topic is just getting started. Average-unit volumes for Q2 and the trailing 12 months for corporate stores was $4.5 million—a number that’s decreasing somewhat as the system expands and offers a broader range of sales volumes. Shake Shack sees the number ranging between $4.1–$4.2 million by the end of the year.

Shake Shack is targeting a strategic mix of one third urban, one third freestanding pads, and one third shopping and lifestyle centers, as it grows. During Q2, the brand opened five domestic stores, including its 100th unit in the U.S. (in New York City). It also expanded in Florida, Connecticut, and launched in new markets Charlotte, Cleveland, and greater Ohio. So far in Q3, Shake Shack has opened a Brooklyn store, and one in Highlands Ranch, Colorado. Over the next two quarters, Shake Shack is entering new markets in Nashville; Birmingham, Alabama; Seattle South Lake Union; and its first Bay Area store in Palo Alto. In the past two-and-half years, Shake Shack has opened eight stores in California, which delivers the highest AUV outside of New York City.

Just last week, Shake Shack announced it won a bid to open a non-traditional location in Terminal B at New York’s LaGuardia Airport.

“We're continuing to grow existing markets, such as South Korea, Japan, and we're preparing for our Shanghai opening as we expand into Mainland, China next year 2019. We're also thrilled to open our first Shack in Hong Kong at the IFC Mall in May. This opening was just an incredible moment for our company, fans lining up to greet us and gathering tremendous media coverage across this important region,” Garutti said.

In June, the company opened its 10th store in Japan, as well as its first Osaka and signed a deal to open another 15 restaurants in Japan through the end of 2024. Shake Shack signed a 15-unit deal for the Philippines in July that runs through 2025, with the first location planned for Metro Manila in the spring of next year.