The chain will still complete orders with its own drivers.
Fast Casual | August 2019 | Rachel Taylor

Panera's initiatives in 2019 have all been about accessibility.

When it comes to delivery, Panera Bread has always done its own thing. The fast casual began implementing the service in 2016. By April 2017, it was looking to hire 10,000 new employees and expand coverage—an initiative that, at the time, would affect 35–40 percent of total locations. Roughly a year later, Panera expanded nationwide to 897 cities and 43 states.

To that point, Panera’s delivery program created more than 13,000 jobs. All the while, not engaging third-party platforms.

While bucking industry norms for a brand not in the pizza space, staying in-house made strategic and financial sense for Panera at the time. However, partnering with third-party aggregators was never completely off the table. As the company just proved on Tuesday.

Panera announced August 27 a new partnership with DoorDash, Grubhub, and Uber Eats to expand its delivery capabilities across 1,600 locations. Panera has roughly 2,300 total restaurants (2,093 at the end of 2018).

Along with its current online ordering process, customers will now find Panera on all three platforms, and have the ability to order directly through those companies.

IS PANERA JUST BEGINNING TO REACH ITS POTENTIAL?

“If you look at what we've been doing with a lot of our announcements this past year, whether it’s around breakfast or extending into non-traditional airports, there's a common theme to it and this announcement is the same,” says Dan Wegiel, Panera’s EVP chief growth and strategy officer. “It's about increasing access of Panera to meet demand.”

The third-party conversation goes back years. In 2012, Panera expanded its menu to make the dining experience more convenient with to-go options. Under the Panera 2.0 plan, digital assets also got an upgrade. However, it wasn’t until 2014 when the brand really started to think about delivery.

The brand began testing with its own drivers and third-party services. At the time, though, third-party delivery was in its infancy. Companies were highly focused in major cities while Panera locations were largely suburban. Wegiel says outside services only covered 7­–14 percent of its restaurants. Pilots also showed in-house drivers could do 10 times the volume.

“We were testing in parallel to try to figure out what’s the best model for us,” Wegiel says. “It became really clear that we could drive a lot more volume doing it ourselves, and we could do so profitably with full end-to-end control of the integrity of the customer experience, which is critical.”

Over the past five years, third-party delivery has exploded. And it’s only expanding. Investment firm William Blair & Co. estimates sales of online restaurant delivery will grow to $62 billion in 2022 from about $25 billion today. Restaurants’ delivery sales are projected to scale at more than three times the rate of on-premises revenue through 2023, with the majority of the growth will be in digital orders, according to a report from L.E.K. Consulting.

More than half of delivery consumers now order food directly from the restaurant’s app or website, L.E.K. added.

To keep pace, 37 percent of restaurants are offering online ordering and 32 percent accept mobile payments, according to industry statistics. Much of the rest of digital delivery orders are through third-party platforms like Grubhub, which reported 16.4 million active diners in the U.S. last year. 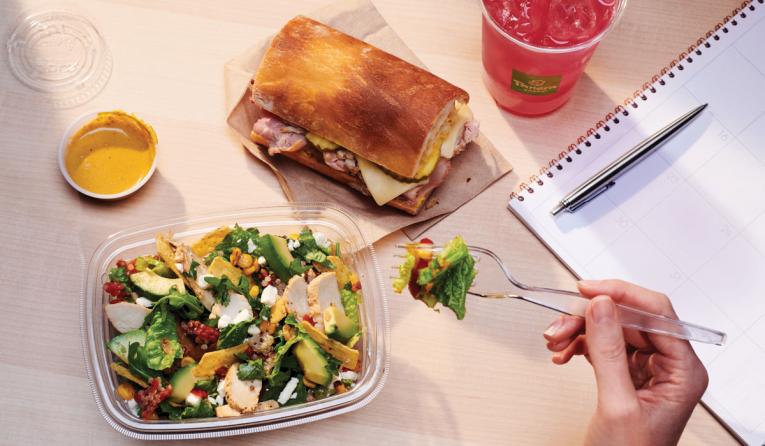 In the year and a half since Panera took its delivery platform national, those services have taken off. It made sense to re-examine the Panera’s delivery strategy, Wegiel says.

“We never had a stance that we were anti-aggregator,” Wegiel says. “We always looked at it and said the space is going to evolve, the customer is going to evolve, and we were in constant contact with them because we were always asking ourselves what model makes the most sense.”

Panera estimates it’s delivered more than 28 million orders, which makes up about 7 percent of overall sales today. It’s been the No. 1 growth driver for the business, Wegiel says, but there’s still ample whitespace.

In order to fully take advantage of the trend, it was necessary for Panera to form relationships with third-party companies, he says.

“We're open to it now because it’s additive and, very importantly, the customer experience is protected. There’s a standard of quality that we believe in, and the economics work for us and very importantly, for our franchisees, which a lot of these models don't,” Wegiel says.

He says delivery companies told Panera it was one of the top search brands on their sites. Panera was only willing to partner up, however, if aggregators agreed to some conditions. The company wanted to ensure a deal would add incremental volume instead of cannibalizing what it had already built, which was confirmed through testing.

“This deal is not about switching customers from one or the other app. It’s about putting Panera in places where customers are looking for it." — Dan Wegiel, Panera’s EVP chief growth and strategy officer.

In order to uphold the “Panera Warm” standard and its style of customer service, the company wanted to maintain complete control of the transaction from beginning to end. Unlike some brands engaging third-party vendors, Panera drivers will still fulfill deliveries. Customers will order through the third-party app and Panera’s employees will bring the food.

The “bring your own courier model” wouldn’t be possible if Panera hadn’t already developed its own delivery system, Wegiel says.

“We invested in our delivery network for a reason,” Wegiel says. “Those reasons still are true. And so, we want to use our own drivers. We want to have access to data. We have to have the experience on your site match as best as possible to the experience on our site.”

In line with the existing delivery experience, the company remained firm on consistent pricing, transparency with delivery fees, and having access to the MyPanera platform—for customers to earn reward points and for the fast casual to continue to have access to data.

When a customer orders through the DoorDash or Uber Eats app, they’ll be able to access almost everything on the menu while earning MyPanera rewards. Because Panera’s customization software is so complex, customization will be limited through the other services, Wegiel says. One other setback is the customer’s inability to redeem MyPanera rewards through the third-party apps. These issues might deter customers from using the new app, but the beauty of the deal, Wegiel says, is customers can still order through Panera if they choose to.

“This deal is not about switching customers from one or the other app,” Wegiel says. “It’s about putting Panera in places where customers are looking for it. Those who are coming to us, they can continue to come to us, they will get the full Panera experience. Those who are already embedded or enter delivery through an aggregator will now also be able to access.”

Wegiel believes the delivery and off-premises side of the business has nowhere to go but up.

“We anticipate growth of our own model in parallel to the growth we’re going to see out of the aggregators,” Wegiel says. “So, the outlook is this continues to be a significant contributor to growth for us and the restaurant industry, and now, we're just going to tap it in both ways.”

21 Main Street, Suite 204
Hackensack
NJ
203-883-6060
SH Franchise Finance is an independent finance company, so we know what it is like (more)
Beverages