Noodles & Company and Delivery: A Benefit and a Burden

The fast casual returned to positive sales in September.

A lot of restaurants expect a convenience-dominated landscape to emerge out of COVID-19’s disruption. This is nothing new exactly; it’s just received a pandemic jolt from a customer changing quicker than expected.

And delivery might be at the center of it. While third-party delivery has remained a lifeline for countless brands in recent months, navigating margins, cost, and brand value is taking on added urgency. Again, these were concerns before COVID. But they’re now essential operating building blocks.

In Q3, which ended September 29, fast casual Noodles & Company welcomed roughly half of its digital sales through delivery. The remainder came via order-ahead quick pickup and curbside.

Yet with this increase in delivery came raised pressure to the company’s P&L through fees. In the quarter, the price tag represented 5.5 percent of Noodles & Company’s sales—an increase of 390 basis points, year-over-year.

A leap like this isn’t unique to Noodles & Company. It’s happening industrywide as restaurants lean into delivery as a bridge to reach guests. It’s not a category most chains can afford to sit out anymore.

Noodles & Company tried to balance the cost by taking a 10 percent price premium for third-party delivery customers, which it implemented in Q4 of last year. CEO Dave Boennighausen said there’s been little resistance to the uptick. Even to the point it’s testing an additional 5 percent price premium expected to spread nationally by the end of the year.

But there’s a long-game to consider. Noodles & Company wants to transfer much of this gained audience to more profitable avenues. Namely, to design a clear point of value differentiation between direct delivery and business via third-party platforms.

THE COVID ROAD SO FAR FOR NOODLES & COMPANY

One of the touted benefits of third-party delivery is that it, in theory, introduces new customers to brands, or the oft-mentioned incremental narrative. Boennighausen said Noodles & Company wants “to migrate them over immediately” when that happens. “So, what you see is, take the opportunity to message those particular guests in the way that we are able to. We do an offer—as an example, free delivery that we currently are launching purely through our own channels.”

Even when the price premium hits 15 percent, though, don’t expect Noodles & Company to message aggressively against it.

“We don’t think that’s necessarily the right path to do it,” Boennighausen added. “But [customers] will see significant benefits of just the overall rewards program. And clearly … it does show up for those who are ordering that there is a better economic answer for them than going to the third-party aggregator.”

Noodles & Company’s Q3 restaurant-level margins was 15.4 percent, a decline of 170 basis points over Q3 2019. The delivery burden was clear. But the boost can’t be understated, either.

Delivery, and digital overall, played a critical role in accelerating brand awareness throughout the country, Boennighausen said. Particularly in markets where Noodles & Company has less saturation. Getting the word out has always been a key notion in first-to-market entries, yet it enjoys a COVID slant of late as well (just like most things). “New customers are being attracted to the brand as this access has increased,” Boennighausen said.

So, really, Noodles & Company’s off-premises lineup today, despite high numbers before, is upgraded and expanded in ways the company hopes to educate guests on. Especially those discovering the brand.

As an example, Noodles & Company’s Northern California and Arizona markets, which boast just nine and five restaurants, respectively, recorded comparable sales gains of 35 and 32 percent in September. This would not have happened without third-party delivery.

“The ability to use technology to activate the brand and increase awareness in newer trade areas or less saturated markets gives us even more confidence in our third strategy, which is to accelerate our unit growth,” Boennighausen said. 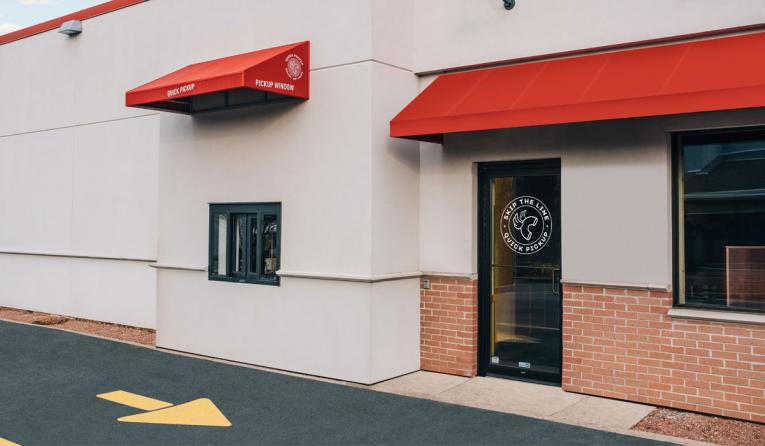 And that latter point sits on the doorstep of something bigger. Boennighausen said Noodles & Company expects “meaningful disruption” in the real estate environment for restaurants. “And we are excited about the opportunities for us to take advantage of that disruption with a more efficient off-premises oriented footprint,” he said.

The Wisconsin unit features an order-ahead drive-thru pickup window—a feature of many recent openings. It opens an outlet to meet increased need for speed and convenience from today’s consumers, Boennighausen said.

Seventy-eight percent of digital orders for this venue have been processed through the drive-thru window, with an average time of 62 seconds despite heightened volume.

When you break down how important of a lever digital mix represents in light of delivery costs, it’s no surprise Noodles & Company plans to target at least 70 percent of new restaurants to include order-ahead drive-thru windows (akin to Chipotle’s Chipotlanes).

“These types of numbers give us greater confidence not just in a reduced square footage in general, but additionally in the potential to test materially cost-effective buildouts that only incorporate off-premise and/or digital sales,” Boennighausen said.

So the potential of a restaurant with no dining room, like the model Taco Bell unveiled a few weeks ago.

Noodles & Company is also exploring virtual restaurants or kitchen alternatives that could provide certain high density or retail opportunities that it didn’t consider viable a few months ago, Boennighausen said.

All this in mind, the brand is targeting at least 10–15 new restaurants in 2021. But an jump to at least 7 percent annual unit growth beginning in 2022. “In the current environment while it’s difficult to reliably anticipate exactly how the recent disruption will influence timing and availability of real estate, we do feel well positioned to take advantage of additional growth opportunities as they arise,” he said.

You could argue, without the awareness third-party delivery affords, Noodles & Company might not be so optimistic about building far from core markets. You can’t migrate digital guests you don’t have.

“We do feel those third-party aggregators, as I said, are extremely important in terms of getting people to discover the brand,” Boennighausen said.

Naturally, there are other brand traits and recent changes Noodles & Company hopes guests will uncover—differentiators to keep them coming back.

The “unique strength of the brand,” Boennighausen said, centers on variety. It’s the only national chain delivering global flavors through a core menu focused on noodles and pasta. Plus, its food travels better than most, which is why Boennighausen believes off-premises mix was so high to begin with.

Early on during the crisis, Noodles & Company grounded itself in amplifying core menu items. It’s returning to innovation now.

“We believe there remains significant opportunity for us to broaden reach and frequency through menu innovation, while at the same time simplifying our existing menu and reducing our necessary execution hurdles for our operations teams,” he said.

The brand is most excited about cauliflower gnocchi, expected to roll out nationally in Q1 of 2021. It adds a plant-based alterative to the menu that is low-carb, low-calorie, gluten free, and contains a full serving of vegetables in each regular portion.

“We are confident that the cauliflower gnocchi will broaden the appeal of our brand, particularly with our attractive target market,” Boennighausen said.

Noodles & Company over-indexes with millennials and Gen Z, with notable strength among young families, he added.

Despite continued limitations on dine-in capacity, the brand’s afternoon and dinner dayparts were up 4.8 and 7.3 percent, respectively, in September. “Our dinner strength gives us increased confidence and we will be well positioned for outside sales growth as consumer patterns ultimately normalize in a post-COVID world,” Boennighausen said.

“While we do expect that there will remain a work from home trend that continues after the pandemic, resulting in continued industry pressured lunch, we are actively working on a refresh of our salad category to position us to capitalize on increased lunch demand for those who do return from more traditional lunch patterns,” he added.

In Q3, Noodles & Company’s total revenue was $106 million compared to $118.3 million in the year-ago period. Same-store sales declined 3.8 percent systemwide, comprised of a 3.6 percent decrease at corporate units and a 5 percent drop at franchises.

Trends have improved in recent weeks.

Noodles & Company turning positive at corporate units was an encouraging stat. Of the brand’s 454 locations on September 29, 378 were company run. Average-unit volumes were up 2.4 percent in September, year-over-year, to $1.187 million as well.

Boennighausen said more than half of the chain’s markets saw continued sequential improvements from September through October despite increased COVID cases across America. Comps are roughly flat quarter-to-date.

Currently, about 85 percent of restaurants are open for limited in-store dining.