Noodles & Company should consider changing its name to Zoodles & Company. Since the launch of the vegetable noodles last year, the alternative noodle option has consistently boosted the company’s results. That continued in the fourth quarter of fiscal 2018 and was reflected in the fast casual’s full-year results.

“I am extremely proud of the work and results that our teams throughout the country accomplished in 2018, and even more excited of what 2019 will bring,” Paul J. B. Murphy, executive chairman of Noodles & Company, said during a March 14 conference call.

READ MORE: Inside the comeback of a fast-casual pioneer.

The introduction of Zoodles in May 2018 kicked off the company’s strategy to restructure its menu and improve value options. Continued testing of the new design and pricing model is ongoing, with an expected completion in May 2019, CEO Dave Boennighausen said.

The company wants to make ordering easier and to do so needs a simplified menu categorization, it said. Noodles & Company introduced a make-it-a-meal offer—which drives up average check—while highlighting new signature flavors.

“Our menu testing has been comprehensive,” Boennighausen said.  “We've been very pleased with the results of this menu test.”

Despite the success, there is still work to be done with Zoodles, Murphy added.

“The company took an important first step in redefining how the brand resonates from a health perspective,” he says. “We still have significant opportunity to build awareness for the Zoodles and expand our better-for-you platform in its entirety through continuing innovation, a significant focus of 2019.”

Restaurant analyst Andrew Strelzik said in the call he was surprised the awareness of the Zoodle wasn’t where the company thought it would be almost a year after its launch. Boennighausen noted there was disconnect between the marketing of the product and customers, and they will focus on communicating the Zoodle’s capabilities moving forward.

“I think especially when it came to the substitution capability of the zucchini noodle, it was a bit too challenging,” Boennighausen said. “As you look at the menu that's in most of our restaurants today to really understand how versatile that noodle was and how you could incorporate it into any dish. That's where we saw opportunities.”

The new Zucchini Shrimp Scampi dish, which was recently added to the menu for a limited time, is part of this strategy to build more awareness of the product.

“As we look at the main menu, it's absolutely repositioned to better articulate that zucchini noodle,” he added.

By highlighting these healthier options, customers will hopefully be more aware of the brand’s overall healthiness. Later in 2019, it hopes to introduce a new vegetable-infused noodle to the menu.

“We continue to believe that we're in the early innings of our strategy and I'm excited for 2019 and for the years to come.” — CEO Dave Boennighausen.

Noodles & Company found that the Zoodle option brought back lapsed customers and resonated with guests who were dining in and out of the restaurant.

“Folks who have not been using the brand for a long time had forgotten about us based on some perceptions around the healthiness of our menu,” Boennighausen said. “That's where we saw a lot of the pickup toward the middle of last year.”

Off-premises has always played a big role for the chain, and it’s still on the rise. In Q4, Noodles & Company capitalized on growing channels as off-premises sales upped to 54 percent of overall mix. The addition of pick-up shelves and streamlined online ordering contributed to this figure.

“Those guests that love us and used to come to us are now coming much more frequently because it's just so much easier to just order ahead, pick it up and you're on your way,” Boennighausen said.

The company continues to ride the momentum it gained in 2018. Boennighausen said Noodles & Company would leverage the financial performance to invest in areas it feels will anchor the brand long-term. Those include expansion in off-premises and app development, which go hand-in-hand.

Eventually the company envisions off-premises mixing 60–65 percent of sales. A big part of hitting that number will be getting customers to order online and pickup orders in the store, which should take less than 30 seconds, Murphy said.

“We see that freeing up, frankly, transaction capability for the dine-in at the Noodles that we have today,” Murphy said.

Currently over a third of sales come from people waiting in line and ordering. By switching to this pay ahead, “pick-it-up-and-you're-gone type approach, can lift that 16 percent of sales up dramatically,” Boennighausen said.

Online ordering increased 16 percent during Q4 and the company hopes that number will grow even more. Throughout 2019, Noodles will test ways to eliminate friction in restaurant pickups.

Along with pickup areas in stores, the company is experimenting with pickup windows in new units. The company expects to incorporate this feature into 75 percent of new locations. In 2019, it plans to open 5–9 new restaurants with 4–6 of those being new company units.

“In the limited number of restaurants that currently have windows, we've seen great adoption and appreciation from our guests to be able to pick up their order without having to leave the car,” Boennighausen said.

Improving the app is a major part of improving online ordering capabilities. Customers want an easy ordering process and these changes will help ease the process. The app will also feature Noodles & Company’s rewards program, which they will relaunch by the end of the year.

“The ease of ordering through it, we think that will continue to help us build the off-premise business and through the online ordering and pay ahead,” Murphy said.

In addition to carry-out options, Noodles & Company will expand delivery and catering options in 2019. Delivery will be available in 95 percent of locations in the near future. This off-premises option accounts for 3.1 percent of sales and is another area with whitespace, the company said.

While customer demands are increasingly focused on delivery, Noodles & Company recognizes adding delivery to the business comes with significant costs.

“We'll be testing different pricing strategies with regard to delivery over the coming months to ascertain how we might mitigate the material impact of delivery fees on our margin profile,” Boennighausen said.

At the moment, catering accounts for less than 2 percent of sales. Noodles & Company is reworking the catering program and will launch it sometime in 2020. 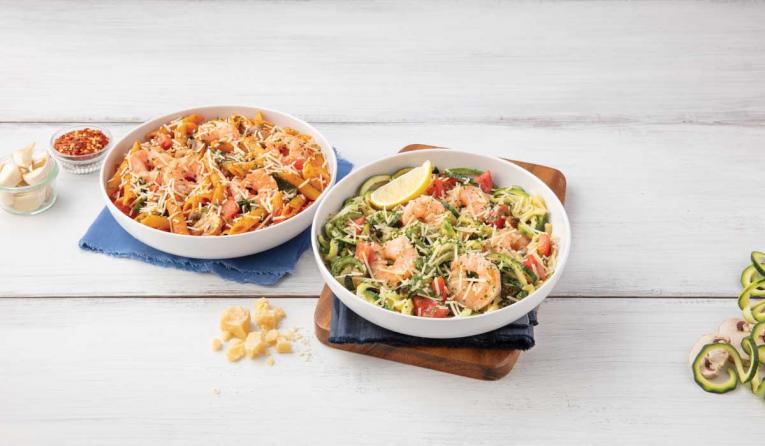 After a brief dip during late November, Noodles & Company same-store sales were able to bounce back. As the company entered 2019, weather continued to be an issue. The company’s new chief financial officer, Ken Kuick, pointed out more than half of its restaurants are in cold weather markets with “with meaningful concentrations in the upper Midwest and Rocky Mountain West.”

The company now expects to have a rocky result at the beginning of the year.

“Minneapolis had its snowiest February ever and February was one of the snowiest and coldest month in years in our home market of Denver,” Kuick said.

The bad weather continued into March. A bomb cyclone in Colorado closed all 60 restaurants in the state. Prior to the polar vortex the company’s same-store sales were around 4.1 percent. Now the company expects first quarter results to come in around 1-2 percent, Kuick said.

On a lighter note, the bad weather won’t be around forever.

“Importantly, in recent weeks, when we have seen more normalized weather, comparable sales have returned to the 4 percent range,” Kuick said.

“Although we saw a temporary disruption to our momentum due to historically poor weather thus far in 2019, we remain extremely confident in the strength of our strategy and the underlying trends of the business,” Boennighausen added. “We continue to believe that we're in the early innings of our strategy and I'm excited for 2019 and for the years to come.”