Out of COVID, Shake Shack Has Cash to Become a Juggernaut

The burger brand has no shortage of growth opportunity ahead.

Fast Casual | May 7, 2021 | Danny Klein
Shake Shack
Shake Shack's sales are recovering, but there's still ground to be made up.

The COVID-19 recovery story remains a tangled one for restaurants, especially those with urban strongholds.

But there is an elephant in the room for some of America’s publicly traded brands.

By mid-May 2020, 25 of the largest public restaurant chains more than doubled aggregator cash holdings, from $9.4 billion pre-pandemic to nearly $20 billion, according to financial services company Rabobank. Each of those brands carried more cash than before coronavirus.

Shake Shack CEO Randy Garutti described this stock-piling stretch as a “moment where no company was unsinkable.”

“And we wanted to make sure we ensured our future. We did that with an equity transaction. And that brought in a significant sum,” he said.

Shake Shack was then ready as it saw the convertible debt market reach “incredible opportunities.” It issued debt for $250 million at a zero percent coupon for seven years. “We may never see numbers like that in our lifetime,” Garutti said. “So we took that opportunity. And we took that opportunity to fortress this balance sheet in a way that we never had at Shake Shack, and very few restaurants, companies or companies of our type have it.”

Shake Shack sits today with more than $400 million in cash on its balance sheet. Baird analyst David Tarantino noted that’s “probably more than [Shake Shack will] ever need to grow the business.”

Yet growth is exactly what’s on deck. Garutti said Shake Shack’s hefty standing is going to fuel development, and it’s going to anchor digital and people investments to unlock that path.

“Take a look at our actual size versus anyone else in your coverage universe, and you see the opportunity, and how big and huge it can be when we get things going,” Garutti said.

The system has since recovered to $69,000, as you can see in the chart below. 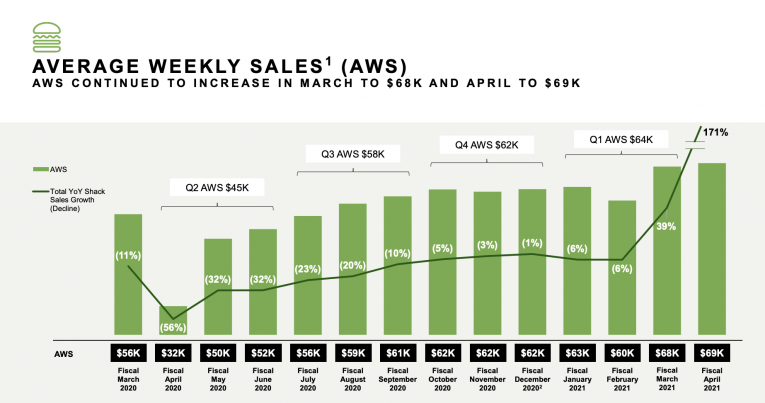 The story for Shake Shack has always been the suburban versus urban drag, and how some of its historically highest-volume locations all but dried up at times over the past year.

In fact, if you take 126 restaurants in the company’s comp base and remove the bottom 25 performers (nearly all urban), Shack Shack’s April same-store sales versus 2019 improve from negative 15 percent to just under 3 percent.

Shake Shack’s Theater District and Herald Square locations—two of the busiest stores its ever opened—are fractions of themselves today, Garutti said. The Grand Central unit, also one of the top performers, remains closed. “We know we've got a lot of work to do, and we need offices to fill back up. We need cities to fill back up. We need Broadway and other things like it, events, games, and all the things that will be energetic,” Garutti said.

Expanding this out relative to 2019—a better measuring stick—Shake Shack’s Q1 same-store sales declined 14.8 percent. In April, they were down 15 percent versus the same period in 2019.

Again, however, suburban stores paced the recovery at nearly flat in April. 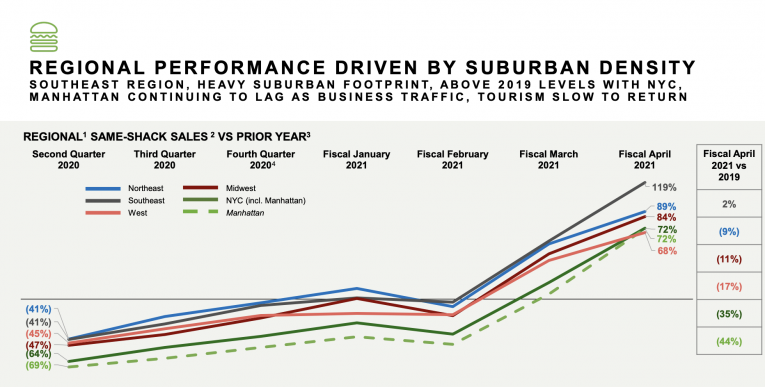 So how does this all connect to the $400 million topic?

Shake Shack plans to open 16–18 locations in the first half of 2021. Barring another major COVID blow, Garutti believes the company will bring 35–40 corporate stores to market this year, with development heavily weighted to Q4. It then expects to accelerate in the 45–50 range next year.

But it isn’t so much the umbrella figure that’s on the table. It’s how Shake Shack is building restaurants and part of the reason its 2021 class has pushed average weekly sales north of $79,000—more than 20 percent higher than the system average.

The class of 2021 will be defined by digital convenience, the company said, including walk-up windows, drive-up windows, curbside, and enhanced interior pickup.

About a third of new units this year will feature walk-up windows. Ten percent will have drive-up windows.

And perhaps the headliner: the first drive-thru is planned to open in 2021—a first for Shake Shack—with five to eight more on deck through 2022.

“We're going to look at things that are exciting, and can continue to drive this company forward,” Garutti said. “And we're thrilled to have that base of cash to do that. It gives us a really infinite playbook and mindset with which we can operate.”

The digital focus for Shake Shack—and the investment behind it—doesn’t end with physical infrastructure. The company’s Shack App Delivery platform rolled nationwide in March through a partnership with Uber Eats.

Guests now see the option for delivery in Shake Shack’s app and can track orders in real-time. The brand charges a 99-cent flat delivery fee and cuts the fee altogether for orders over $35. “Offering delivery within our own channel is a key step in our ongoing digital and sales growth strategy, and allows us to build strong relationships with our guests and enable more personal and direct communication,” Garutti said. “We're also working to improve in-app communications, particularly to enhance the pickup notifications experience.”

Shake Shack has an upcoming web redesign geared around enhanced user experience and greater personalization via targeted messaging and improved merchandising. Other digital product launches are planned, too, including a new payment gateway and Android app that will encourage app delivery and pre-order conversion, the company said.

The importance of digital leverage and accessibility can’t be understated for Shake Shack, particularly when you consider how it’s building a fleet to weave this functionality together.

Digital sales mix represented 60 percent of sales in Q1, and decreased to 51 percent in April as dine-in business flooded back. Yet even with this in-store jump, Shake Shack retained 90 percent of the business when you compare fiscal April to the digital sales period of fiscal January.

Annualized, Shake Shack’s Q1 digital sales equated to a digital-only AUV of $2 million, a “clear measure of the strength and impact of digital across our business,” outgoing CFO Tara Comonte said.

While this mix will undoubtedly trickle back (it would be a troubling sign if it didn’t), the key for Shake Shack will reside in retaining and acquiring guests through digital channels. The ability to greet fresh customers during these strange times, and then to inspire them to stick around.

Shake Shack welcomed nearly 2.5 million new purchases through digital avenues since mid-March last year. And here’s the banner point: “Whether through our new digitally enabled order-ahead options, such as curbside or delivery now available through our own app, these channels are proving to be effective as both acquisition and retention vehicles, and with digital guests, continuing to demonstrate higher levels of spend,” Comonte said.

Essentially, digital as an acquisition, frequency, and engagement tool. And the restaurants to court that. 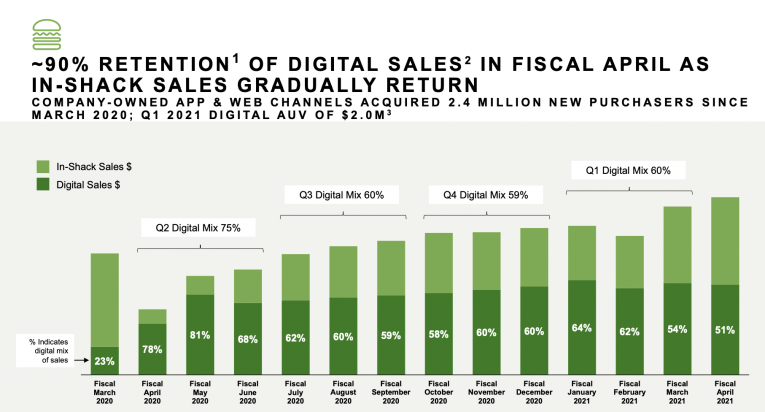 There are two parallel conversations taking place as well. One is the cost to build, where lumber and steel prices surged in recent months. Garutti said Shake Shack expects the overall cost to build stores to increase for “some period of time.”

“Nobody knows that this will be a long or short-term deal,” he said. “There's obviously a lot of demand for growth, and limited supply on some of these items. So we feel prepared for that. We feel ready.”

And then there’s the “people investment” Garutti mentioned.

Garutti said he’s walked around his neighborhood and seen restaurants closed early due to staffing. It’s something you rarely noticed before COVID. “Look, you can read any article today and understand what that pressure looks like. It's obvious, it's clear, we're not immune to that,” he said.

To date, there hasn’t been a material impact on Shake Shack. It’s a market-by-market issue that’s often out of the company’s control. But there are internal efforts taking place to shield Shake Shack from the hiring crisis. According to the most recent jobs report, restaurants added 187,000 jobs in April, and the overall unemployment rate was 6.1 percent. The sector now employs 10.6 million people, which is still significantly below the 12 million or so before COVID.

“So, look, we gave the majority of our Shack's raises last year, the entry level wages throughout the country, most places, that's part of the pressure on our labor line that you've seen and that we are proud to invest in our team,” Garutti said. “And there's no doubt, there's a lot of call for great people right now. So we'll be looking to keep strengthen our teams, and it'll be a challenge.”

In 2020, Shake Shack created more than 1,097 jobs company-wide. It reported 1,500-plus internal promotions, with 56 percent going to women and 76 percent to people of color.

The company provided more than $6 million in additional compensation and bonuses to employees to support them through COVID.

So to Garutti’s point, it’s not cheap to compete in this war for talent.

GMs at Shake Shack are eligible for an equity grant of $10,000 in stock annually. There’s quarterly incentive bonus payouts for management. All employees can receive employer-paid short-term disability.

Just during COVID, the company provided a 10 percent premium pay to all hourly workers supporting operations from April through August. Shake Shack awarded year-ended bonuses to hourly employees based on position and service time. It guaranteed bonus payouts to management for Q2 through Q1, and paid 100 percent of elected benefits premiums for furloughed workers.

Turning to additional growth, Shake Shack plans to open between 15–20 licenses restaurants in 2021 before boosting to 20–25 next year.

“So when we think about development, we really think we can be everywhere,” Garutti said of the big picture. “I mean, we've got a big opportunity here in every one of those major regions of the United States. We're obviously pretty focused on California, some of the other major regions in the northeast that we've been strong. But we're not going to let the pandemic dictate the growth plan solely. There's a lot of learning what's happened this year. And we're going to add that to our already, robust development plan.”