PDQ Finds its Secret Sauce During the Pandemic

A team-first approach guided the growing chicken chain through 2020.

Sales dropped early for PDQ, up to 40 percent. But the climb back was soon on.

In just about a decade, Nick Reader’s fast-casual dream materialized into 58 drive-thru locations and a brand that holds its own in one of the sector’s fiercest categories.

PDQ hit the Tampa Bay, Florida, scene in October 2011. The chicken-centric brand was the culmination of two years of research from Reader—formerly CFO of the Tampa Bay Buccaneers, the NFL’s youngest at the time—and Bob Basham, cofounder of Outback Steakhouse. Fellow Outback cofounder Tim Gannon, the man credited with creating the Bloomin’ Onion, was also involved in PDQ’s early growth.

At the outset, it was a conscious decision from Reader to let PDQ’s personality evolve over time rather than take white-out to misguided principles years later. Reader was the financial guy, while Basham oversaw operations. And they wanted guests to dictate what came next.

The result was a budding, regional concept that’s fostered a core following in Florida (home to 47 units, including nontraditional venues, like the Tampa International Airport), alongside introductions into North Carolina, New Jersey, New York, and South Carolina.

But there are moments Reader gets nostalgic for those startup days. COVID-19 pressed PDQ like it did all chains out of the March 2020 gate, with sales plummeting 40 percent.

Thanks to its drive-thru base, Florida’s open economy, and the expansion of digital, PDQ leapt off the floor and reported sales 8 percent higher than pre-COVID levels ahead of summer.

Yet while those results aren’t unheard of lately, especially in quick service, Reader says COVID uncovered more about his business than numbers could explain. And, in that, a realization that took him back to 2011. “I do think it brought back a little bit of that magic, when you were small and we knew each other on a different level,” Reader says.

By “we,” Reader is referencing PDQ’s employees and the brand’s overall workforce. When dining rooms locked down and elements of the industry froze, Reader got moving. He tried to visit every store and reconnect with operators. In PDQ’s infancy, Reader says, he could walk in and everybody knew him. There wasn’t a “big boss mentality.” People didn’t get nervous when the owner showed up.

“You’re focused on a million things and your company goes from 20 employees to 2,000 employees. Just sometimes you lose a little bit of that magic,” Reader says. “Myself and my executive team took a chance to say hey, look, let’s get in the stores. Let’s look at the stores. Let’s help them.”

Reader and executives returned to the front lines. “Everybody talks about the menu and this and that, but for us, it was a chance to refocus on what I think makes PDQ special. Obviously, when I say we’re [quick-service] plus, it’s for two reasons—we think the fresh food, hand-breaded, gives quality they’re accustomed to getting in casual to fine dining. But it also gave us a chance to put some employee plans together.”

Naturally, Reader didn’t realize COVID was going to spark a labor shortage. Or that hiring hourly workers would become a race against unemployment, remote work, personal safety fears, flexibility needs, childcare concerns, and everything in between.

Reader’s observation from visiting stores in 2020 was just that PDQ should thank employees who fought through the pandemic trough. So the company started a bonus program. It launched an online learning app called the “Coop.” PDQ held weekly communications, education sessions, and fireside chats with business leaders. It worked on a health and wellness program—mental and physical—and developed a points system when PDQ could give back for community service (coming later in the year).

“A chance to reset and say thank you,” Reader says.

When sales dropped 40 percent, PDQ asked each store to give back to their community. If food wasn’t going to be sold to guests, it shouldn’t be wasted, either.

“The secret sauce was our people,” he says. “We recognized that, and we were able to double down on the brand ethos with our people.”

Again, it harkens back. COVID provided PDQ, which stands for People Dedicated to Quality, a bit of a break, since the growth-minded chain wasn’t scouring real estate or trying to raise capital. Everything stopped, Reader says.

“It left you with two things to focus on. And a lot of the magic when you’re really good as a brand is when you’re razor focused on your priorities,” Reader says.

Those two things were PDQ’s home office and people in the field. One takes care of the other, to take care of the other. Or phrased differently, corporate helps frontline employees, who then deliver PDQ’s experience to consumers.

In 2021, PDQ launched a program to help a team member buy a house, where it matches a deposit for a down payment. There are scholarship plans. Reader himself delivered funds to all but two of PDQ’s winners. He met parents, and thanked them. And PDQ’s retention bonus program, which is quarterly, is something that began even before the labor shortage, Reader says.

If employees make it through the year, they can earn a bonus double the quarterly take. 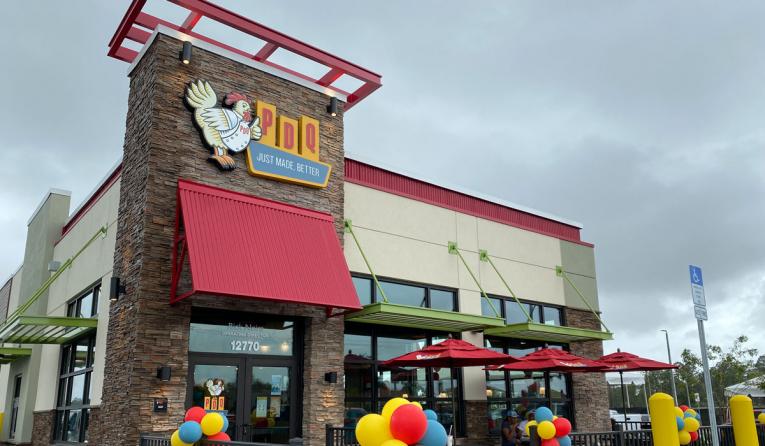 PDQ expects to return to prior growth levels next year or the year after.

When sales rebounded, Reader says, PDQ met with its investors and partners and stressed the employee need. It also prioritized not raising prices, if possible, and placing emphasis on quantity and quality so PDQ would not appear like it cut back during COVID. Reward the guest, Reader says, instead of asking them to compromise.

This was an important notion on multiple levels. Another reason PDQ’s sales are lifting above pre-virus levels is that COVID offered it a chance to welcome back a lot of lapsed users, or greet new ones. If for no other reason than the fact PDQ’s drive-thru was open at a time when many competitors were not.

This allowed PDQ to make a first impression Reader wanted to ensure lasted beyond quarantine times. A Spicy Chicken Sandwich and new nuggets—buttermilk marinated with a spicy breading—LTO arrived in February. As did a Cap’n Crunch Berry Shake. This kind of innovation is going to continue.

Additionally, while growth paused in 2020, PDQ did manage to open a few units. And Reader says they’re actively out looking for sites, with a plan to reignite the pipeline this year and next, which would signal growth come 2022–2023.

However, much of that future-look is dependent on market conditions and what truly unfolds in the wake of closures. Whether speculation drives prices up or available real estate fuels a resurgence. Especially with already high-occupancy drive-thrus, it’s a process with plenty of variables, Reader says.

“At the onset of COVID, we didn’t know what was going to happen. So we said, let’s focus on what we know versus what we don’t know,” Reader says.

And once more, that led PQD to its people and its customers.

Yet still, retention, even in relative terms compared to other industries, needs to rise to the top of brands’ priority lists, Reader says. “If you don’t lose good employees, hopefully you don’t have to hire people,” he says. In which case, perhaps you’re not incentivizing prospective employees with everything from iPhones to cash.

PDQ has fostered word-of-mouth referrals through people-first practices. For instance, it’s thrown graduation parties at stores for employees getting out of school. One worker even got married in a location recently.

“For us, it’s always been a focus on retention,” he says. “Even with everything going on, we had, by about 40 percent, our best retention percentage we’ve had as a company, even through [COVID].”

Reader says employers often get caught up in the timeline. “You don’t need to be a career PDQ person for that to be a success in our system,” he says.

There’s an employee in Sarasota, Reader says, who created a music technology he hopes to scale. PDQ worked with him on a business plan. If all goes accordingly, Reader knows this employee won’t stay at PDQ much longer. “We think that’s a big part of us and trying to be our culture … is trying to better yourself. That’s something we’re always trying to challenge our team members with. What are your goals? Share them with us. And we won’t take offense if it’s not working with us forever. But let’s talk about it.”

At the corporate level, Reader does this, too. If somebody, hourly or otherwise, wants to work in marketing or real estate, the brand will offer them a paid day to come and shadow PDQ execs at the home office.

Reader says he tries to meet with management teams every quarter. He’ll ask, “who are two or three people you can’t live without. And what can I do?”

“I don’t introduce myself to say I’m the boss. It’s more to get to know the people and understand their pain points and goals in life,” Reader says. “If they don’t feel like they’re valued, we can learn a ton from that.”

“I start with the insight that we’re big enough now that we have a footprint but we’re still small enough that I can attack at least every market, every quarter,” Reader says. “And set up a dinner with team members.”

During COVID, Reader didn’t hesitate to walk this walk. He didn’t feel right, he says, asking employees to operate from the trenches and take risks while he stayed at home. “I thought it was important that we didn’t have this wall between restaurant and home office employees,” he says.

Reader held weekly Zoom calls with every manager. Anybody could dial in. “I answered every question,” Reader says.

“The teams that win championships, they play for each other, not with each other,” Reader says.