Potbelly Will Be Ready for the Restaurant Rebound

Better days are ahead for the industry. And the sandwich fast casual is already preparing.

Potbelly is forging ahead with a five-pillared strategy.

Life after COVID-19 has pulled up a seat at the table. A $28.6 billion relief fund coupled with a “war-time effort to vaccinate the U.S. population,” is finally chipping away at months of setbacks, pivots, and concerns of a “new normal.” The White House said March 11—a year from the day often associated with the start of COVID’s freefall—it was directing all states, tribes, and territories to make adults eligible for vaccination by May 1. If that happened, the nation could inch closer to normal by July 4.

Potbelly CEO Bob Wright, a former Wendy’s executive who joined the fast casual in July, believes we’re in for a year marked by two very different halves. The first part, he hopes, will watch the virus wane and vaccines become more widely distributed as weather improves.

“We’ve recently seen at least one state where we do business eliminate dining room restrictions altogether,” he said during a conference call, likely referencing Texas. “And we’d expect most states to do this more gradually through the first half of the year.”

So what happens in Round 2? This is when the impact of herd immunity kicks in, Wright said. In turn, dining restrictions lift quickly, possibly in full across most of Potbelly’s markets. And people will take notice. They’ll start returning to work and cashing in on PTO hoarded during lockdowns. They’ll begin traveling again. Airport restaurants, urban markets—anywhere where crowds congregate and mobility thrives—will surge back.

Potbelly expects the first half of 2021 to track slightly above the second part of 2020, with recovery accelerating mid-year.

But if you go back to the early weeks of COVID’s assault, it was hard to imagine any of this. Potbelly cautioned it could close 100 of its 400-plus restaurants. The figured ended up at just 28, with 321 leases getting renegotiated. “This was a huge lift,” Wright said. Potbelly will save $4 million in annual occupancy costs after doing so. It will also avoid roughly $15 million in shop losses thanks to the lease actions.

The key here, though, Wright said, is Potbelly was busy regaining footing ahead of a potential second-half recovery, not sitting in neutral “… we'll be ready to capitalize on these trends as we will have achieved scale in our traffic-driven profitability, strategic initiatives,” he said.

“Overall, there's an element of optimism that is present across the country, and that's certainly translating to our team here at Potbelly,” Wright added later.

Potbelly’s five-pillared strategy, outlined by Wright throughout his tenure, is coming to life across the system. Nearly all of the elements will play a role in the boom period Wright predicted.

The first is “craveable quality food at a great value.” Potbelly continues to simplify menu offerings in an effort to bolster brand perception, achieve better throughput, and devise an easier customer journey. This includes consolidating menuboards and fixing value with a wider price ladder. Also, product enhancements, such as offering smaller sandwiches and half salads outside of Potbelly’s “Pick Your Pair” promotion. The brand is testing larger-sized options with more meat, cheese, and toppings, too.

While that doesn’t sound like simplification tactics at face value, it’s going to be executed with fewer SKUs, “making for a more efficient system and faster customer experiences,” Wright said.

Potbelly’s menu changes are already in the beta market testing phase. If all goes accordingly, they’ll spread systemwide in the second of the year. Again, when the landscape overall opens up.

Potbelly’s next pillar centers on “people creating good vibes.” The brand plans to shift to a modern labor model with hours-based management to improve deployment planning for real-time performance monitoring and management. Or put simply, Potbelly wants to become more efficient with scheduling.

The platform is currently in pilot and should expand to all shops by the end of Q1.

There are some other labor efforts in the works as well. Given the challenges of hiring employees in today’s climate, especially with expanded unemployment benefits under the new relief package, Potbelly is trying out some fresh ideas regarding incentives, including the transformation of its bonus program to motivate top talent and drive performance. Wright didn’t dive deeper, but did say the brand is creating ways to identify and develop “instant-win recognition” to inspire shop-level associates and to share new ideas across the organization.

Potbelly implemented a balanced scorecard at the store level that aligns traffic-driving incentives with profitable growth, including a “share of the wealth component” to the plan.

“We believe we can significantly enhance our field leaders and their employees' careers with the organization, while, at the same time, better tying these successes with that of the organization and its goals,” Wright said. “Both the field and the support center bonus programs incentivize traffic, top line growth and profitability and ensure our teams win when we win.”

Potbelly hired Adam Noyes as chief operations officer in August. He previously held a variety of senior leadership posts with Checkers & Rally’s. Overall, the company tapped a new CEO, CFO, COO, general counsel, and added two new board members throughout the past year.

Just talking about channels, Potbelly welcomed 69 percent of its sales in-store in Q1 2020 (pre-pandemic). Eleven percent came via catering, while 6 percent was drive thru and 15 percent digital.

Year-to-date in 2021, the pie looks remarkably different. Although relatively common during these remarkable times. Digital mixes 39 percent, drive thru 10 percent, catering only 4 percent, and in-store 47 percent.

Potbelly relaunched a simplified Perks program in the second half of 2020. There’s still sizable opportunity to better leverage data and understand guests, Wright said. Additionally, to increase awareness and ultimately drive traffic through promotional activity. Therefore, Potbelly is currently redeveloping its app and web interface, mainly to enable easier reordering and better tie in the loyalty platform. The company added 533,000 new Potbelly Perks members in 2020, with loyalty users reporting same-store sales 13 percentage points higher than the rest of the system.

“This is a huge step for Potbelly and is only the beginning of the journey as we more fully leverage technology to drive traffic, create efficiencies, enhance rewards and grow our loyal customer base,” Wright said.

The last leg of Potbelly’s turnaround journey concerns franchise-focused development. About 90 percent of the brand’s restaurants are company-run: 400 corporate versus 46 franchises today. This represents a “tremendous advantage,” Wright said, when you’re turning around a business and positioning it for profitable growth. At the same time, it presents alluring prospects given Potbelly remains significantly underpenetrated across most of the country, despite strong name value. “We can leverage what works to generate growth across both company and franchise platforms,” he said. Three to five new franchise shops will open in 2021. Wright said “significant annual growth” will emerge as the company works through 2022 and beyond. 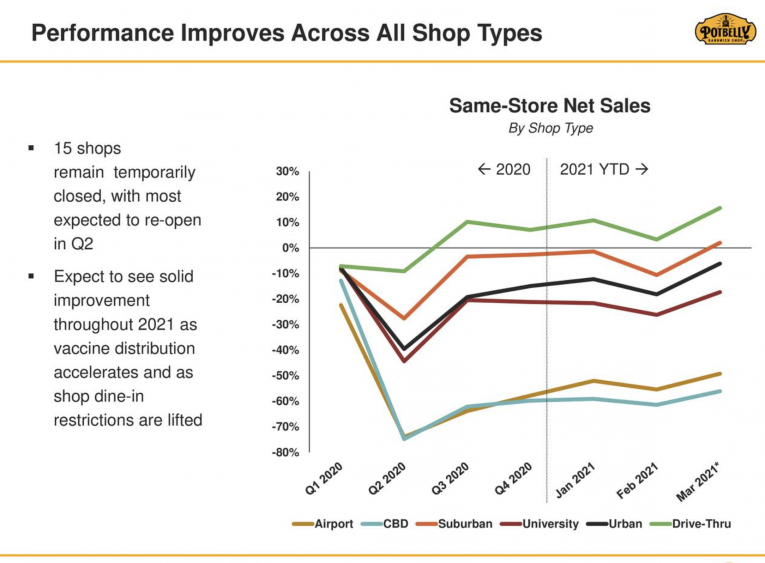 Potbelly exited 2020 with sequential improvement in same-store sales in seven of the last eight months. 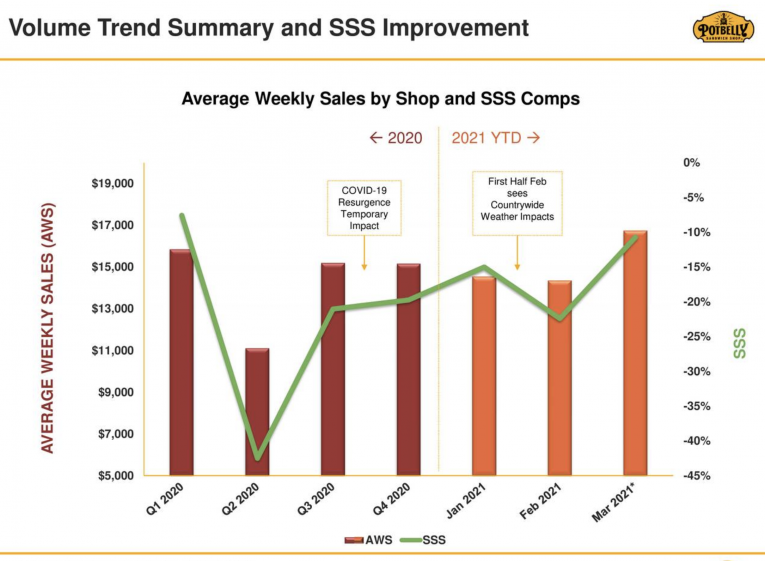 To the earlier discussion of roller-coaster recovery, suburban locations trended upward. And Potbelly witnessed positive comps in drive thru and digital channels. It’s opened nearly all of its closed, non-central business district and airport locations, and expanded hours of operation in most shops to pre-COVID levels.

Potbelly’s same-store sales climbed since May, with December “particularly strong,” CFO Steve Cirulis said, thanks to holiday traffic. November saw a step back as cases surged.

So far in 2021, comps declined just 15 percent in January before falling 22.4 percent in February due to severe weather. While still early, March has jumped to negative 10.7 percent.