The emerging fast casual, set to debut in Los Angeles, combines the best characteristics of Roman and California-style pizza.

The married couple discovered it while on an extended trip to Italy more than a decade ago after Rosenfield sold CPK. The style is called al taglio, which translates to “pizza by the cut.” Slices are divided into small rectangular pieces.

“When I was there and introduced to it, I understood that there were several artisans in Rome taking this traditional street food and taking it to a new level,” Rosenfield says. “As I started to study about roman pizza, I really learned it’s evolved over the last 50 years. “

That represents the “RO” part of the ROCA name. The last two letters stand for the influence of California and its farm-to-table ingredients. Some menu examples include Bell Pepper (tomato sauce, tomato sauce, roasted red and yellow peppers, balsamic glaze, chopped basil, and evoo), Italian Sausage Potato (Yukon Gold potatoes, housemade Italian sausage, mozzarella, fried rosemary, and evoo), and Pepperoni Hot Honey (tomato sauce, pepperoni, mozzarella, gorgonzola, and Mike’s Hot Honey). Flour is organic and all meats and proteins are free of antibiotics and hormones. Pizza is offered by the cut, half, or full pan.

“That's something that we did at CPK which is, pizza is a canvas that you can paint on, so we can do toppings that are not traditional toppings, and I say CPK introduced barbecue chicken pizza to the world,” Rosenfield says. “It introduced Thai chicken pizza to the world. As it turns out, when we put barbecue chicken and our recipe on this crust, and we put Thai chicken on this crust, in my mind, it's the best version that I've ever had. People who are tasting it are saying the same thing.”

Rosenfield’s initial objective was to essentially recreate CPK with a full-service wood-burning oven, but he recognized the traditional Neapolitan or New York pizza didn’t travel well—and this was before the pandemic, when the rise of takeout and delivery was noticeably surfacing. The roman style, however, is the most portable pizza product Rosenfield’s seen. 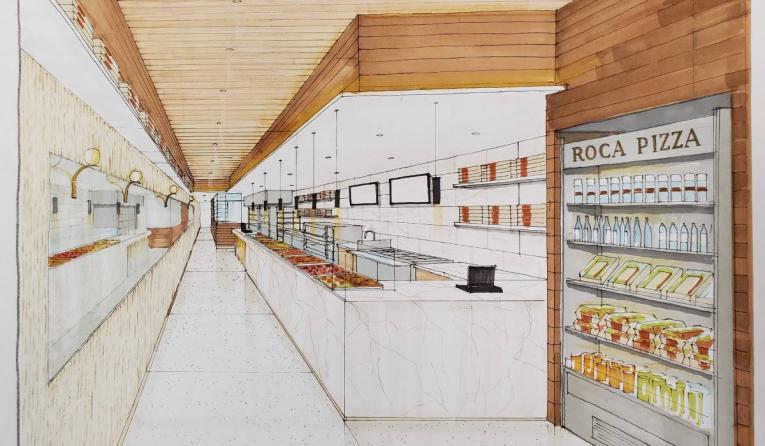 A rendering of an upcoming ROCA restaurant.

"You walk in, there's pans lined up of all these colors," says ROCA cofounder Rick Rosenfield, explaining how future brick-and-mortar stores will look. "That's what I think will really be attractive to people. They’re little jewelry boxes. Just the rainbow of flavors is not something that a U.S. customer is really accustomed to."

In late May 2021, ROCA debuted as a pop-up experience at The Americana at Brand in Glendale, California. The plan was for the temporary store to last a few months, but the concept was the victim of the pandemic and struggled to get building permits. So the pop-up lasted a year, and in that time, ROCA was able to develop its team and menu. Yelp reviews were between 4.5 and 5 stars the entire time.

“The reviews were fabulous for what we were doing. People loved it,” Rosenfield says. “Just exactly what I said—so many people say it's the best pizza they’ve ever had. Well, that's what we're trying to do. Our reaction is, we want to introduce a new product to people. Most people in America have not seen this product, which is amazing. For me, it's amazing because I started CPK 37 years ago, and it's hard to imagine that there is a great product like this roman-style pizza that I'm describing that most of America has not seen.”

Now the brand is gearing up to open its first two brick-and-mortar stores, which will both be grab-and-go restaurants in Los Angeles. One will debut at Palisades Village at the end of 2022—a venue that attracts a younger crowd and a place Rosenfield calls “one of the Instagram capitals of the world.” The location, developed in partnership with billionaire real estate mogul Rick Caruso, features outdoor dining and a delivery window. Then in early 2023, ROCA will enter Marina Del Rey, an area that houses a 30-year-old CPK store that produces one of the highest volumes in the system. Each store will have display cabinets to showcase full pan pizzas and a section of pre-packaged salads and sandwiches made from pizza dough.

“What’s really beautiful about this is that this is going to be very clean, light-colored stone,” Rosenfield says. “So basically, these are beautiful little bakeries, and we didn't have the chance to do that in that way at the pop-up. You walk in, there's pans lined up of all these colors. That's what I think will really be attractive to people. They’re little jewelry boxes. Just the rainbow of flavors is not something that a U.S. customer is really accustomed to. So you walk in and they're all in front of you and you can mix and match, which is also a great way to either have a quick snack or have a pizza party with all the different flavors.”

The two shopping centers are small, but welcome dense traffic and high-income customers. Rosenfield believes they’re the perfect locations to build brand awareness, and that the next step would be nontraditional locations like ghost kitchens, airports, and stadiums. What he doesn’t know yet is how brick-and-mortar units will look going forward, whether it will be around 1,000 square feet or more toward 2,000 square feet with seating inside.

“I know this from my own buying practice is once you know a product, you no longer care what kitchen or where they're making it,” he says. “What I want to know is am I getting the quality product I want and how soon can I get?”

Rosenfield also thinks ROCA is capable of going national and global via franchising, something he did little of while at CPK. When he sold the brand, there were 212 company-owned units. At the time, the only franchising agreements in the U.S. other than an airport was at the Mirage in Las Vegas with real estate developer Steve Wynn, and another with Caruso in Southern California. CPK announced a formal, bigger domestic franchise program at the end of 2021.

Franchising isn’t something he will enter immediately, but it’s well within the long-term strategy of ROCA.

“I'm not going to get into that until we get a system that we're happy with, that we can help people achieve success,” Rosenfield says.