Digital has grown to approximately 80 percent of the business.

Fast Casual | May 2020 | Ben Coley
Shake Shack
The number of customers using digital channels for the first time more than doubled in the past eight weeks.

CEO Randy Garutti said that as dining rooms reopen, the windows will improve the flow of customers and encourage digital ordering. It also may serve as an area for third-party delivery drivers, as well. No stores have drive-thru, but some units have constructed makeshift drive-thrus.

“We've been studying current Shack layouts and future Shack designs in order to identify where this model can be quickly added,” Garutti said during the brand’s Q1 review. “It may take time and many forms, but all toward the goal of continuing to build the community gathering places the world needs, while adding a level of convenience, safety, distance, and frictionless pickup to meet the needs of our guests.”

“ … Across urban, suburban, shopping center, and pad site locations, we expect these new pickup points with both interior and/or exterior access will support our goals of convenience while allowing Shacks to be what they've always been for our fans,” he continued. “These plans will take time, but we're bullish on the opportunity we believe they represent.”

Garutti said the company isn’t sure yet how many Shake Shacks will be retrofitted with the new Shake Track. As far as the investment into the enhancement, he doesn’t expect a material increase in new build. He noted there will be some level of capital expenditure for current stores, but the process will be carried out quickly.

With Shake Track planned for future stores, the company may change how it evaluates site selection. Garutti said there’s a strong pipeline of future stores with signed leases—some in the design phase. The company has also identified several potential sites. 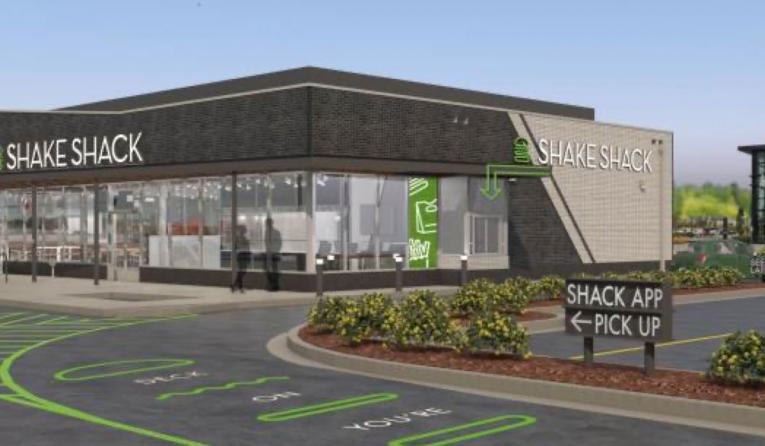 With nearly $250 million in cash on its balance sheet—most in the company’s history—the CEO said Shake Shack is built to withstand the long-term effects of the pandemic. Although he said the brand will preserve cash and won’t “get over our skis,” he does believe the position will open up new opportunities for real estate in the future. The previous high for cash on hand was $92 million in 2018.”

“That's a tremendous position for a company to be in during this time,” Garutti said. “And we intend to use that wisely when the time is right and capitalize on what we expect will be a changed retail environment. And I think there will be companies like ours that can expect to be even more coveted than we were before by developers and landlords to capture the best pieces of real estate out there.”

In line with expectations, same-store sales were down 2 percent systemwide through February. The pandemic pushed sales even lower; in March, comp sales were down 29 percent year-over-year. As a result, Shake Shack ended Q1 with a decline of 12.8 percent. Revenue in Q1 increased 8 percent to $143.1 million.

Digital channels mixed approximately 80 percent by the end of April and sales from the app and web almost tripled compared to the year-ago period. The number of customers using digital channels for the first time more than doubled in the past eight weeks.

The brand was previously exclusive with Grubhub, but expanded its partnerships to Uber Eats, DoorDash, Postmates, and Caviar. It has also sold more than 12,000 ShackBurger meal kits in collaboration with Goldbelly.

Here’s a look at how the company has trended from the ending period of Q1 to the beginning  Q2:

As of April 29, 17 U.S. corporate stores were temporarily closed, and many locations have reduced hours and limited capacity. Sixty-one of 120 licensed units were also closed, including all locations in Japan. Shake Shacks in airports have either closed or are experiencing a significant slowdown in business. Units in South Korea, China, and Hong Kong have reopened dining rooms with restrictions.

“We don't expect that to be a long-term problem, but I think as is the moment right now, nobody knows exactly on all of these issues,” Garutti said. “So we're watching closely. We believe our supply is intact, and we believe it's going to be more expensive.”

During the pandemic, Shake Shack furloughed more than 1,000 employees across stores and the corporate office. Furloughed employees will receive medical insurance through July 1 and general managers will receive full pay even if their store is closed. As sales have crept upward, Shake Shack has managed to bring back some furloughed employees. For those that are working, the brand increased wages by 10 percent through June 3 and guaranteed Q2 bonuses for managers.

Although several states are now allowing dining rooms to reopen, Shake Shack has yet to reopen any in the U.S. Garutti said the company is closely monitoring the situation.

“When we do, you'll see a lot of blocked off or removed tables,” Garutti said. “You'll see a lot of space between any guest. You'll see the line very clearly delineated with space in between, and you'll see pickup areas as spread out as possible. And by the way, you'll see our staff as spread out as possible for their own safety. So it's going to take time. We have to work with throttles right now. There is no good reason to just start to try to do all of the sales that these Shacks once did. That is not the safe thing, and it's what we need to be careful about.”

Shake Shack is burning about $800,00 per week, which assumes the pay increase and Q2 bonuses and excludes capital expenditures. Design and construction of new stores was suspended; eight stores are either complete or near completion and another nine are partially complete.