The burger chain is hoping to change the digital game.

As vaccine distribution picks up and dining rooms get the green light, there’s little doubt Shake Shack’s digital mix will retreat from current levels. In January, digital accounted for 64 percent of the burger chain’s business. It was 63 percent for much of February and 59 percent all of Q4. The mild increase stemmed from colder weather.

Yet while consumer behavior, in the near-term, continues to be influenced by restrictions and other COVID-specific realities, learnings are emerging. Namely, Shake Shack’s own-app and web channels have proven popular among guests. In 2021 through the first three weeks of fiscal February, sales in those channels rose nearly 300 percent versus the same period last year. And since mid-March last year, Shake Shack welcomed more than 2 million new purchases through direct outlets, “representing important momentum and ongoing opportunity,” CFO Tara Comonte said last month.

Beyond the more profitable dynamic, compared to third-party, white-label options provide Shake Shack the ability to communicate with customers in a more targeted and personalized manner.

Looking at recent results from another angle, Shake Shack’s Q4 digital sales, when annualized, equate to a digital-only average-unit volume of $1.9 million. That’s more than an El Pollo Loco or Panda Express in 2019, and above Chipotle’s $1.1 million second make-line AUVs touted earlier in the year. Shake Shack is generally a high AUV business at $4.214 million before 2020—second only to Chick-fil-A, although across a much smaller footprint of 185 units versus 2,500. The brand’s trailing 12-month AUV in 2020 was $3 million due to COVID setbacks. Average weekly sales were $62,000 in Q4, a 6.9 percent sequential increase.

Regardless of COVID evolution, though, the importance of digital isn’t cloudy or fleeting. Either is where Shake Shack wants to take it. “As we focus on the enhancement of our digital and broader guest experience, we’ve been working to incorporate delivery within our own app web channel,” Comonte said.

Shake Shack piloted in-app delivery across a “handful” of stores in late December, early January. It then rolled to more than 100 venues, with a full nationwide launch expected through the end of Q1.

That day arrived Wednesday. Shake Shack announced the full expansion of its own delivery service via the iOS Shake Shack app, available through the Apple App Store. It’s part of an exclusive partnership with Uber Eats.

Guests nationwide can now see the option for delivery in Shake Shack’s app and view tracking of their order in real-time. Shake Shack will charge a 99-cent flat delivery fee and cut the fee altogether for orders over $35.

As part of the investment, Shake Shack said it’s building out its technology development team in collaboration with Uber Eats fulfillment, allowing for more direct contact with guests. 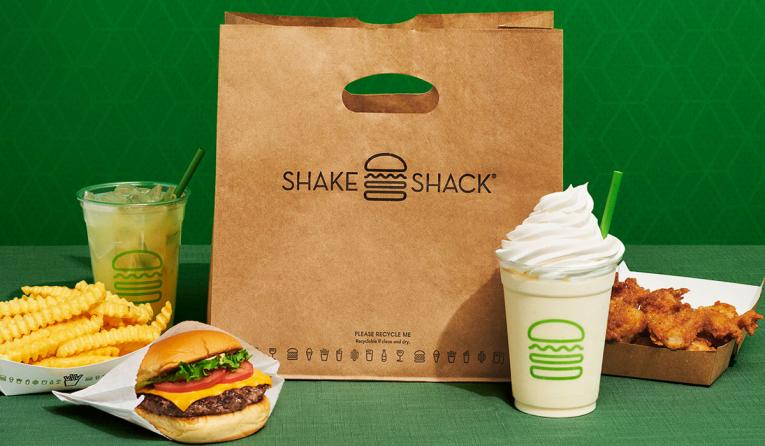 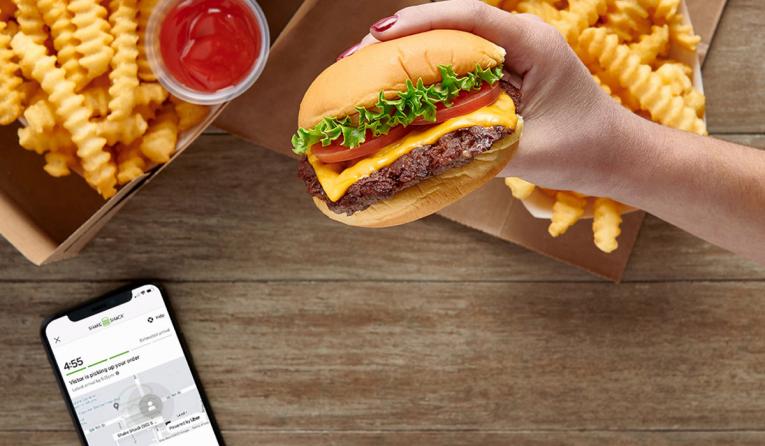 Alongside the delivery add, Shake Shack plans to further digital growth with a mobile-first web redesign.

“We’re thrilled to introduce delivery through our own app, offering guests a new way to get Shake Shack however and whenever they want it,” Shake Shack CEO Randy Garutti said in a statement. “With an influx of new and returning guests to our digital channels this past year, we’ve accelerated our digital investment. Delivery through the Shack app represents the latest innovation from Shake Shack and is reflective of our increasing focus on convenience across the broader Shake Shack experience.”

Shake Shack is also launching a free fries delivery promotions (over $15) with promo code GIMME to get the word out, and hosting a national digital campaign with a series of video shorts that will run on Facebook, Instagram, and Twitter.

Alongside the delivery add, Shake Shack plans to further digital growth with a mobile-first web redesign, delivery in the Android Shack app, and new payment options, including Apple Pay, Google Pay, and contactless payment options. These initiatives are expected in the back half of 2021.

Shake Shack recently rolled a test of sustainable and biodegradable cutlery and straws at select U.S. locations as well, including aluminum water bottles that will replace SHACK 2|O plastic water bottles at stores across the West Coast, with the potential to spread nationwide. The brand has reduced its overall use of packaging and plastic across operations and delivery by 40 percent, year-over-year.

Shake Shack’s in-app delivery program is part of its “Shake Track” movement centered on digital pre-ordering and fulfillment. The basic premise being Shake Shack wants to open accessibility and channels to meet a more agile guest. Everything from walk-up windows to curbside pickup to in-store pickup shelves, drive-thru, and, now, in-app delivery. All connected to the ability to pre-order online, either via the app or web.

So far, the brand added 13 exterior windows. In addition to delivery orders, about 25 percent of app and web orders are now picked up through these windows, Garutti said. The chain’s first drive thru is planned later this year in Orlando, Florida, with additional targets in Kansas City, Minneapolis, Detroit, and more coming.

Pushing delivery in-house is key for Shake Shack during this phase. The chain said in February it was in the early stages of testing a 5 percent menu price uplift on all third-party delivery marketplaces—a process that could play a role in Shake Shack’s messaging. “We see the ability to offer lower pricing in company-owned channels as a key marketing lever as we look to expand our reach, while higher prices across our third-party delivery partners will help offset some of the additional costs that come to the sales channel,” Comonte said.

Garutti added Shake Shack wants to keep the funnel open, meaning it won’t abandon third-party. “We want people to order however they want, OK? We want to have great partnerships with third party. We believe in the strength of those marketplaces and those opportunities,” he said. “That said, we want to create our channel as the most preferred channel. We want it to be the best price, the most rewarding, and the most engaging and that will come in the form of various ways we'll connect with people on our channels, whether it's item specific, whether it's price over time.”

In other updates, Shake Shack said nearly half of its guests are picking curbside when given the option, with nearly 190,000 unique guests trying it since launch, and average order values more than 20 percent higher than in-restaurant ones (at these locations). Curbside is currently live at more than 70 restaurants.

Shake Shack Drives Into a Bold, New Restaurant World
The Power of a Simple Franchise Brand
The Evolution of the Quick-Service Restaurant Experience