Shake Shack opened a new restaurant location—in the virtual world of The Sims 4.

Fast Casual | September 29, 2022 | Callie Evergreen
Shake Shack
In a bid to reach younger consumers, Shake Shack partnered with Tumblr mod creators to build an exact replica of the restaurant and menu for The Sims 4 universe.

Shake Shack partnered with Tumblr mod creators BeansBuilds and Insimnia to build an exact replica of the restaurant and menu in The Sims 4 universe, where players can pretend to order burgers, chicken sandwiches, chicken bites, fries, shakes, frozen custard, and beer and wine.

Kristyn Clark, Shake Shack’s director of brand and communications, notes the brand’s intention to connect with fans in creative ways and hopefully tap into new audiences. “Gaming is an area we’ve always talked about, but have never entered into in a serious way,” Clark says.

“We know The Sims resurged in popularity during the pandemic, and the user base is massive. We also know there is a strong food culture developed within the game,” Clark says. “We saw The Sims as the perfect medium to showcase Shake Shack and offer fans new opportunities to engage with our brand.”

Virtual plants and signs reading “Hand-spun shakes” decorate the walls of The Sims 4 Shake Shack, while wooden panels and green tiling add to the clean and modern aesthetic. The Sims restaurant even has gender-neutral bathrooms, just in case a player is running low on their bladder meter.

Gen Z customers make up a significant portion of Shake Shack’s guest demographic, Clark says, which made The Sims world the perfect point of entry.

“Players can walk around the restaurant and see the beautiful, intentional design. They can engage with our menu and read about the premium ingredients we use in our food, and they can order our beer and wine,” she says. “It’s a unique and fun vehicle for storytelling and brand education.” 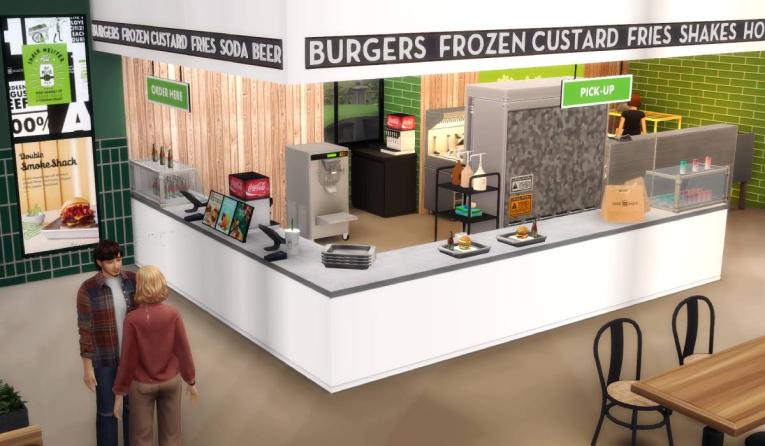 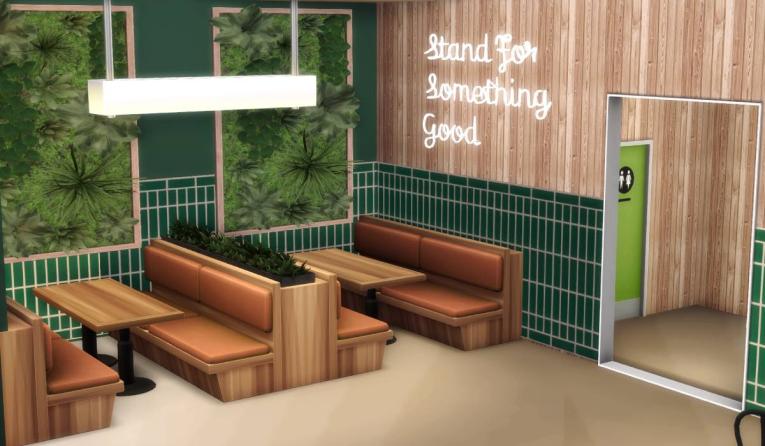 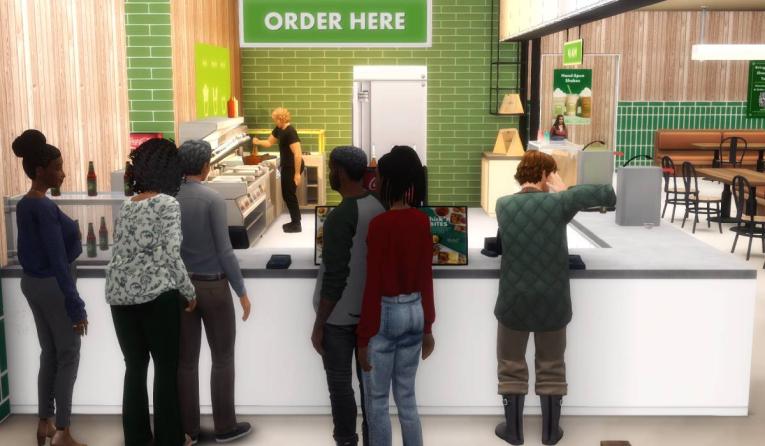 From initial outreach to launch, the entire process took about eight weeks, according to Clark.

The fast-casual chain even partnered with a streamer from Twitch, a popular platform for gamers to host live videos with participation from largely younger audiences. Avid Sims player “KelseyDangerous” hosted a two-hour sponsored livestream last week, where she demonstrated the mod to hundreds of live viewers and gave a few people $10 off their next Shake Shack order in a giveaway.

Since then, the video has garnered more than 7,000 views, and Clark estimates the campaign has resulted in 300,000 people in potential reach—“which continues to climb,” she says. Plus, thousands of people have downloaded the Shack mod off BeansBuilds’ and Insimnia’s Tumblrs.

KelseyDangerous revealed during the steam that BeansBuilds, one of the mod creators, designed the restaurant’s drive-thru feature in the game after one of the brand’s first drive-thru locations in Chesterfield, Missouri.

“Our goal was to reach new audiences while educating around our brand and our values in an immersive, engaging way,” Clark says.

This isn’t the first time Shake Shack has partnered with a popular online content creator. Earlier this month, Shake Shack spiced up its classic menu items with ingredients from First We Feast’s viral YouTube series, Hot Ones.

And earlier this year, the brand became one of the first companies to offer Bitcoin as a reward to customers for Shake Shack purchases made through Cash App, according to Clark. “We saw the test as a great opportunity to reach Cash App’s younger user base,” she adds.

Shake Shack ranked No. 19 on QSR’s 25 Fastest-Growing Fast-Food Chains in America, with more than 240 locations and $777 million in U.S. systemwide sales in 2021. The company opened 38 new restaurants last year and aims to add 45 to 50 new locations in 2022. While Shake Shack does not offer franchising at this time, some Shacks are operated via licensed agreements.

Celebrity chef Danny Meyer—founder and executive chairman of Union Square Hospitality Group—started Shake Shack as a small hot dog kiosk in 2001 in an effort to revitalize New York City’s Madison Square Park. The brand issued an initial public offering in early 2015 (NYSE: SHAK) with a stock price of $21, which hovered around $46 on Thursday.