The digital pickup location is headed to Washington, D.C.

Fast Casual | May 6, 2022 | Danny Klein
Sweetgreen
Sweetgreen expects to double in size over the next three to five years.

Sweetgreen’s path to 1,000 locations is hardly going to roll in a straight line. In March, the fast casual lifted the curtain on its first drive-thru—a boldly designed “sweetlane” build that featured a round observation window and order-ahead capability.

Notably, the concept provided a glimpse into how Sweetgreen might broaden its suburban base. Founded 15 years ago by three college friends in a 560-square-foot Washington, D.C. restaurant, the brand opened 31 stores last year, and 18 of them debuted outside of urban areas. One also sprung up in a “residential location.” The chain brought eight net new openings to market in Q1 of this year.

But that’s not to suggest Sweetgreen will abandon its city-center history. However, given digital trends—that slice of the business accounted for 67 percent of 2021 revenue—how Sweetgreen approaches dense markets is changing, too. On Friday, the fast casual unveiled its next pilot, a digital-only pickup venue that’s headed to Washington, D.C.’s Mount Vernon Square neighborhood in early August. Called “sweetgreen pickup kitchen,” the restaurant doesn’t feature an inside dining area or front-service lines. There’s exclusive access to pickup shelves for grab-and-go. Guests can order pickup via Sweetgreen’s website, app, and through third-party delivery. There’s an outdoor patio as well.

“With digital sales representing over half of our total revenue last fiscal year, the sweetgreen pickup kitchen is a true extension of our growing digital business,” Sweetgreen co-founder and chief concept officer Nicolas Jammet told QSR in an email. “We are excited to meet our customers where they are, by providing new ways to eat fresh, healthy food, without sacrificing quality or convenience.”

After going public in November, Sweetgreen has discussed at length its desire to broaden digital access as it spreads awareness. Of that 67 percent digital mix, 46 percent came from “owned digital,” or direct interactions. In Q1 of 2022, announced Thursday afternoon, the digital mix was 66 percent and owned digital came in at 43 percent. The prior year, figures were 77 and 53 percent, respectively (a sign of lessened restrictions and dine-in recovery).

The chain developed a native delivery experience two years ago as it worked to glean more data and build personalized communications. Also, to control profitability and brand experience (restaurant-level margins were 13 percent in 2021 after negative 4 percent in 2020). Sweetgreen launched digital pickup nine years ago and followed with B2B “Outposts,” which are offsite drop-off points, in 2018. 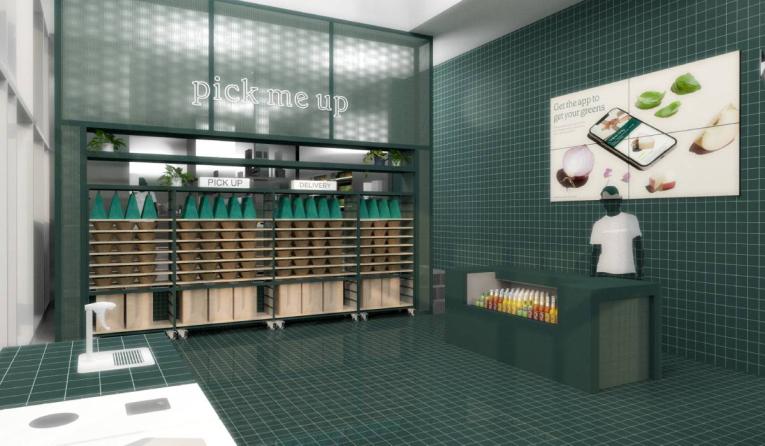 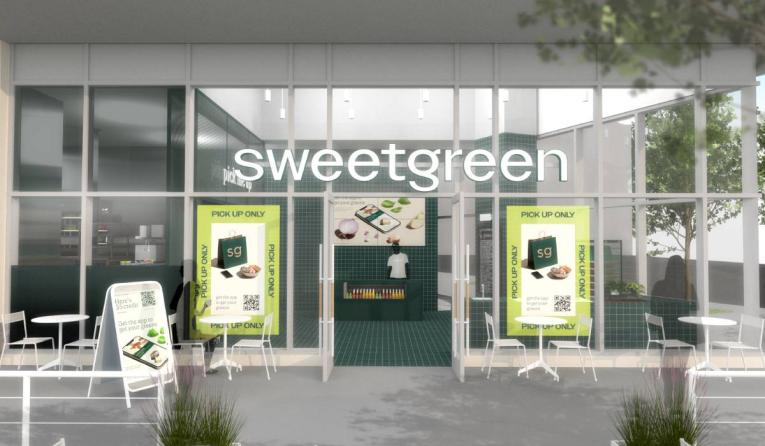 Sweetgreen digital pickup customers can sit outside, if they choose, but no orders are made inside at a counter.

Two-thirds of Sweetgreen’s digital sales last year came from its app and website and other manual options. “Digital customers are our most habitual users and we believe this new format will provide us with more options to connect people to real food,” Jammet said earlier of the sweetlane concept.

In that venue, in addition to tapping orders in advance through Sweetgreen’s digital platforms, guests can place pickup orders inside the restaurant.

Furthering Jammet’s point, Sweetgreen said in March when it gets customers into digital channels, historically, they come in at least 1.5 times more often. And they spend 20 percent more. Once they evolve into a “two-channel customer,” they show up 2.5 times more.

Sweetgreen’s total revenue in 2021 was $340 million—a record high for the company, and a 54 percent jump, year-over-year. Average-unit volumes climbed from $2.2 to $2.6 million.

Q1 2022 revenue was $102.6 million versus $61.4 million in the year-ago stretch. Same-store sales climbed 35 percent over a drop of 26 percent. The comp consisted of a 25 percent increase from transactions and a benefit from menu price increases of 10 percent subsequent to 2021's quarter.

The company’s average-unit volumes also recovered to $2.8 million from $2.1 million in Q1 2020. Sweetgreen swung a net loss of 49.2 million compared to a net loss of $30 million last year. Adjusted EBITDA was negative $16.5 million versus negative $21 million in that same lap.

Sweetgreen’s increase of roughly 950 basis, year-over-year, primarily credited to greater sales leverage (COVID recovery) as well as 10 percent of pricing and the termination of its loyalty program.

The company said gains were offset “by increases in the prevailing wage rates across the country and an increase in bonus-related expenses as we continued our focus on employee retention and continued to work to navigate the increasingly tight labor market that is impacting the restaurant industry.”

A diversified suite of options will key the growth chart as Sweetgreen targets at least 35 openings this year, including two to three fresh markets. The long-run goal is to double in the next three to five years and reach 1,000 units by decade’s close.

“We remain well-positioned to achieve our vision of being as ubiquitous as traditional fast food, but with the transparency and quality that consumers increasingly expect,” co-founder and CEO Jonathan Neman said.

"The path to recovery remains neither linear nor consistent; however, the strength of our brand, product, digital platform, and team gives us confidence in reaching our goal of 1,000 restaurants across the United States by the end of the decade,” added CFO Mitch Reback. “We are well-equipped and keenly focused on building a sustainable business and our path to profitability."