Tijuana Flats tried franchising before but halted the program.

In late May 2007, Tijuana Flats shifted gears. The company, created in 1995, halted franchising after five rocky years. Founder Brian Wheeler told The Orlando Sentinel that his Tex-Mex concept didn’t want to become just another franchise machine. “When you do that,” he said at the time, “you can lose the integrity of the brand.”

Tijuana Flats blossomed to 50 locations, expanding into North Carolina and Pennsylvania. The brand also needed to buy back failing stores. When the program stopped, there were about a dozen or so franchisees.

As for why Tijuana Flats shifted, it likely had to do with maturation of the brand’s lifecycle. Competitors like Chipotle and Qdoba flooded the Orlando market and forced Tijuana Flats to scale up quickly, or else face the risk of getting smothered by its competitors’ leverage.

Rick Van Warner, a consultant at the time, told The Orlando Sentinel that Tijuana Flats’ decision showed the company was building a brand to last, rather than get rich. Interestingly enough, Van Warner would become Tijuana Flats’ CEO, succeeding Larry Ryback last February when he left for Cotton Patch Café Inc. He still sits on the chain’s board.

Van Warner made way for Brian Wright, the former chief executive of Bertucci’s, in May. Wright also worked as COO of Au Bon Pain and served as president of Chevy’s Restaurants. He previously directed operations for Einstein Bros. Bagels (then known as Einstein Noah’s Bagels) and Boston Market, where he opened more than 50 locations.

During his time with the latter, Wright came across Tijuana Flats quite often, he says. He was a fan of the brand before he became its leader. And now, he’s bringing franchising back into the fold.

There are currently 135 locations. Only 19 are franchised. Wright says Tijuana Flats is preparing to expand into markets east of the Mississippi (to start, at least), with franchising as the main vehicle.

“The people we’ve talked to, I think there are so many people who have such fond memories of the brand,” Wright says. “I talked to so many different people and as we talked to potential franchisees, the majority of them have made comments like, they remembered the brand from five, 10 years ago, etc. So you can tell there’s a genuine interest in the brand.” 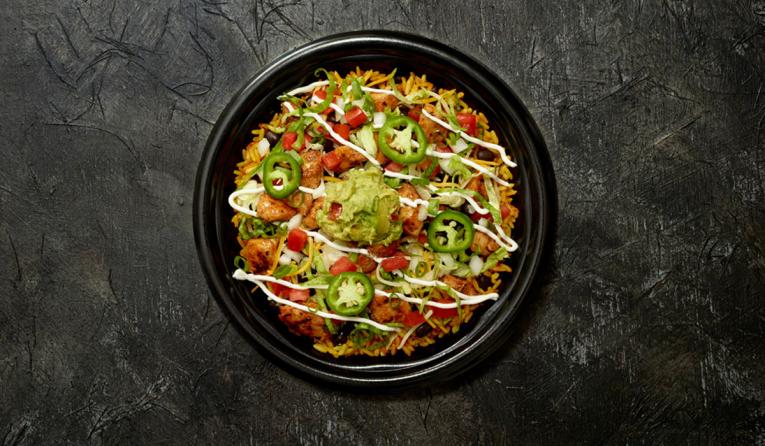 There are no trashcans in Tijuana Flats' dining rooms. Employees bus the tables and take the dishes to the kitchen.

Beyond just the size of Tijuana Flats, much has changed since the 2007 reversal. Firstly, AUA Private Equity Partners infused an undisclosed investment into the chain four years ago. Through its affiliates, the firm now owns a majority stake in Tijuana Flats. When Wright was hired, the company also announced the appointments of Louie Psallidas as chief financial officer and Steve Culbert as SVP of operations. Psallidas arrived from Uno Restaurant Holdings, the parent company of 100-plus unit Uno Pizzeria & Grill. During his tenure, Psallidas held CEO, president, and CFO titles. Culbert most recently worked as VP of operations at Au Bon Pain. Culbert’s prior stops include regional VP with Einstein Noah Restaurant Group and managing partner for Bloomin’ Brands’ Carrabba’s.

The revamped leadership was brought on to support Tijuana Flats’ “next chapter of growth,” the brand said.

Tijuana Flats attended a franchise conference recently, Wright says, where it talked about what it’s calling the restart of its franchising system. There was no shortage of attention.

But before Tijuana Flats puts ink to development deals, it wants to make sure it continues a modernization process that’s been center to AUA Private Equity Partners’ investment.

Tijuana Flats, founded in Winter Park, Florida, has locations in North Carolina, Georgia, Virginia, and one in Indiana, but remains a Sunshine State-heavy chain. The whitespace is obvious. But so is the cautionary tale.

“We want to protect the cultural side of the brand,” Wright says. “Whether our guests are using the brand here in Florida today or if it’s in another state, we want to make sure that’s really recognized by consumers.”

“I think that’s such a differentiator for the brand,” he adds. “We’ve got to make sure we do this in a way that protects the brand.”

Wright has worked his way through eight different companies during 35 years in the restaurant business. It just so happens it’s been split evenly between quick and full service. Fittingly, Tijuana Flats’ unique proposition is its hybrid nature. The brand considers itself a “fast casual plus.” There are no trashcans in the dining rooms so customers won’t mistakenly bus their own tables. The food is prepped from scratch every morning. 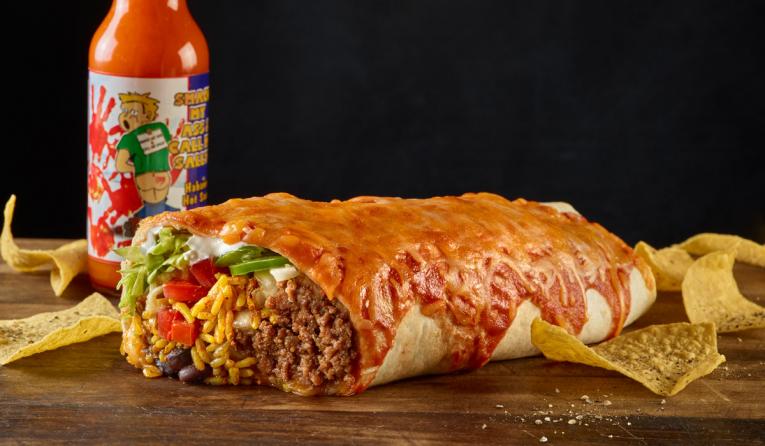 Tijuana Flats has some ... unique hot sauce options on its bar.

Wright says the back of the house feels like a casual-dining kitchen, just smaller. Really only the counter-service setup speaks to fast casual. Unlike many brands, Tijuana Flats doesn’t take orders and move on. “In the world of Tijuana Flats, we assist you from the time you walk in the door, hopefully opening the doors for you, assisting you with the menu,” Wright says. The food is brought to the table. Employees conduct table checks. Refill drinks. And when customers are done, Tijuana Flats pulls a guest’s plate and dishes and takes them back to the kitchen.

“We don’t want the consumer to feel like they have to get up and take care of their own things,” Wright says.

When Wright came on board, he trained for two weeks in the restaurant. He jumped in and cooked. Wright says he wanted to learn the menu and understand the restaurants. He came away surprised by the quality of the systems in place. “I’ve been blown away by how many people—not just management, but employees—have been here five, 15, 16 years,” Wright says. “You just don’t hear that in this industry in this day and age.”

There’s no silver bullet, he adds. It’s simply how the chain was built, and perhaps a positive side effect of growing steadily instead of exploding. Wright hosts “heat talks,” internally so Tijuana Flats can gauge employees’ on what’s working and recognize their accomplishments. He also holds weekly calls with general managers to keep them in the loop.“The founders put those types of systems in place from the first handful of restaurants, but management over the years has done such an excellent job of continuing that and building on that type of environment,” Wright says. 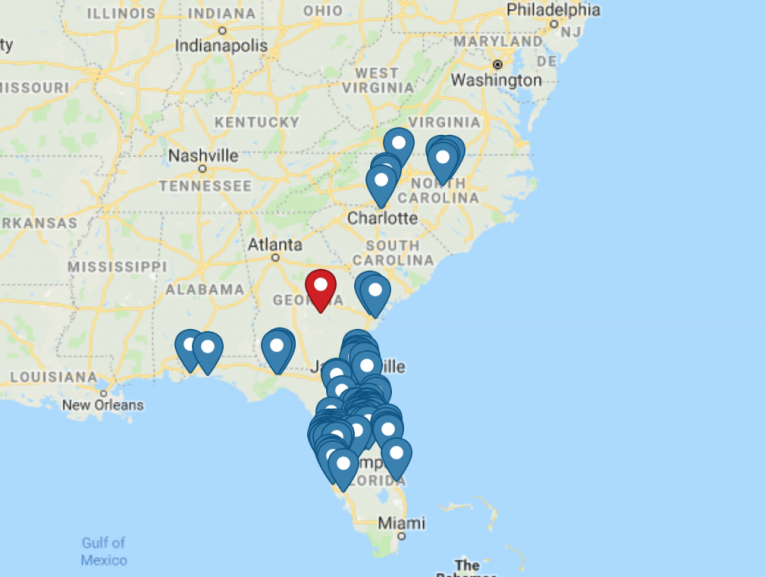 Tijuan Flats is still a regional brand, with plenty of room to grow.

During its renewed growth, Tijuana Flats will still target corporate markets where it fits. Additionally, the chain wants to stick its toe in the water with non-traditional real estate. “Hopefully at some point be able to enter some airport spaces and things of that nature,” Wright says.

Tijuana Flats has a flexible model that courts the unchained-chain dynamic. It’s designed to lend itself and mold into a community, which Wright believes will only fuel its expansion. For instance, the ceiling tiles are often painted by local residents, whether its an art class or school, to reflect the market. College towns. The nearby high school. Tijuana Flats can look the part of a mom-and-pop spot from day one. “These types of things allow a community to warm up to a brand so you’re not just another corporate chain dropping in on the corn of Main and Main,” Wright says.

A recent Florida spot in Orange Lake painted a golf scorecard, clubs, and shoes on the wall to reflect the local course. “It’s done tastefully but feels like it fits into the community,” he says. “You take that example and use it as you enter new cities around the United States.”

As for perspective operators, Wright says, Tijuana Flats is looking for seasoned veterans—established franchisees who might be looking for another brand to add to their portfolio.

“I think sometimes when you’re getting into the one- and two-store type systems, it can really prohibit growth and, quite frankly in my opinion, the odds of success start to go down,” he says. “You really need seasoned people who understand how to go into a market and build out a portion of that area.”

He sees Tijuana Flats going into different cities up and down the East Coast.

“It’s a brand that will carry very well across state borders,” he says.