With Chipotlanes and digital growth leading the way, the fast casual is ready to accelerate development.

Fast Casual | July 2020 | Danny Klein
Chipotle
Chipotlanes will make up 70 percent (or more) of the brand's growth next year.

Chipotle’s digital business more than tripled this past quarter as COVID-19 continues to rattle what we expect of consumer behavior. A 125 percent year-over-year lift in delivery. Order ahead up 140 percent. Entrees per digital transaction significantly higher. Fifteen million rewards members in 15 months—perhaps the fastest growing program in quick service history.

While these striking figures are a sign of strange times, they’re opening runway for tangible long-term potential for Chipotle. Starting with development itself.

The brand opened 37 net new restaurants in Q2, a three-month period that ended June 30. Of those, 21 included a “Chipotlane,” and the company recently debuted its 100th such venue as it climbed to 2,669 total restaurants. In Q1, Chipotle opened 19 locations—11 with a Chipotlane.

CFO Jack Hartung said Wednesday Chipotle remains confident in the opportunity to more than double its U.S. footprint into 5,000-unit territory. Today, there are nine restaurant chains above that mark domestically.

Coronavirus fallout could actually jolt the process for Chipotle. “And, in fact, our strong financial position along with less competition for high quality sites as other businesses pull back is allowing us to build a robust new development pipeline,” Hartung said.

Chipotle expects to accelerate its new unit development in 2021, the company said during its Q2 recap. It's even planning to hire 10,000 new people over the next few months to get there and unveiled a "We Are Open. We are Growing. We Are Hiring" campaign in May, which resulted in roughly 8,000 hires to-date.

The fast casual’s development was already surging into fiscal 2020. It opened 80 locations in Q4—more than any other period at any time in its history. More than half of those (46) showcased Chipotlanes.

So Chipotle was starting to really pull the lever pre-COVID-19. Like most restaurants, though, it had to slow expansion (the brand planned 150–165 new openings for the year before the crisis) to preserve cash and focus on essential spending in recent months. But the whitespace is growing.

Hartung said stores with Chipotlanes have pushed digital mix of 60 percent in recent weeks, with about two-thirds coming from order ahead and pickup. That latter point is a critical driver. The higher-margin and more consumer-friendly channel is one Chipotle wants to chase.

There are 13 Chipotlanes in the chain’s comp base, meaning they opened well before the pandemic. At those, sales run more than 10 percent higher from the same opening period, while more recent openings during COVID-19 are 30 percent above average stores, Hartung said.

It’s led Chipotle to forecast 60 percent of its new restaurant growth this year will feature mobile pickup lanes. Next year, it will exceed 70 percent.

Additionally, Chipotle started to relocate units to add a Chipotlane, as well as remodel others. It recently moved three venues and remodeled three others to add the feature. All six came out of the box with higher sales, Hartung said.

“The good news is in this environment, our landlords are more willing to work with us to do a remodel,” he said. “And if they're not willing to work with us on a remodel, there is a site across the street that we'll take a look at as well. So we think the opportunity to move more Chipotlane over the next three to five years is pretty encouraging.”

Hartung added Chipotle has an internal three- to five-year growth plan, but isn’t ready to disclose it. He did note they’re looking at mature markets, like Denver and Kansas City, as potential relocation and remodel centers—not necessarily new builds.

Chipotle announced in December it was testing a new design intended to leverage rapid growth in its digital business. At that point, it was leaping off a quarter where digital rose 88 percent, year-over-year, to account for 18.3 percent of company sales (more on this shortly and why the opportunity is even bigger now).

This included trials in four new units: an urban store front, standalone restaurant with a Chipotlane pick-up window, and an endcap location with a Chipotlane. They were slated for Chicago, Cincinnati, and two in Phoenix.

Niccol said Wednesday Chipotle is “going to test various formats because our goal is to have a suite of assets that we can then put into a trade area to maximize Chipotle sales out of a trade area.”

It’s straightforward: Erase one of Chipotle’s past roadblocks—the notion of “we can’t put a Chipotle there.”

“The good news is we're seeing these access points all to be truly viable and I feel like we've got terrific flexibility in what we want to build, whether it's inline, traditional Chipotle all the way to the freestanding Chipotlane,” Niccol said. “We've got a lot of flexibility in between those two, call it, bookends. And we're going to continue to experiment with what are the sites we can put Chipotle in.”

Importantly, the scale of Chipotle’s digital business suddenly supports additional access points. That wasn’t the case a few years ago. The pull-forward of its digital sales allows the brand to look in additional trade areas, Hartung said. 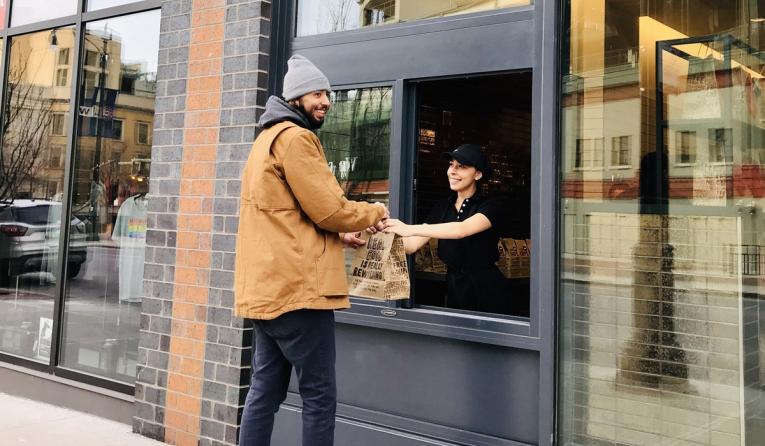 New designs for Chipotle make even more sense now in a digital-centric world.

Chipotle’s growth is opening up, as Hartung noted, because the fast casual’s accessibility has. There are a lot of different dining occasions now, and many of them were set alight by COVID-19 lockdowns.

The brand’s digital business grew 216.3 percent in Q2, year-over-year, to nearly 61 percent of total sales, Chipotle said Wednesday. It accounted for $829.3 million in the quarter—the company’s highest quarterly level ever by some distance.

To an earlier note, Chipotle’s Q1 digital business lifted 81 percent to $372 million (a company record at the time). That was more than quadruple Chipotle’s digital gains from three years ago. In Q2 2019, it was $262 million. The previous Q4, digital accounted for just 12.9 percent of sales.

Naturally, these are not average times and the results reflect that. Chipotle’s in-store ordering is down about 37 percent, and the brand said it’s reclaimed only about 40–50 percent of dine-in business.

Chipotle’s same-store sales declined 9.8 percent this past quarter as total revenue fell 4.8 percent to $1.36 billion, its first decline in at least 14 quarters.

Yet performance has turned of late. Here’s the cadence of comps in recent months:

Niccol said, even with in-restaurant dining returning, Chipotle’s digital momentum has stuck with a mix of nearly 50 percent in July.

As of last week, only 30 restaurants remained fully closed (mostly in malls and shopping centers). Chipotle began reopening lobbies in the middle of May and currently has roughly 85 percent of its units offering limited in-restaurant and/or patio dining, with the remaining open for off-premises business.

Since sales troughed in late March, Chipotle has retained 70–80 percent of its digital gains while recovering 40–50 percent of in-store sales. While it’s fallen back a bit in July, it’s the reason Chipotle has returned comps into positive territory, even measured against a 2019 run that saw same-store sales climb nearly 10 percent.

Niccol credited some of the growth to partnering with all major third-party delivery aggregators. The brand deploys DoorDash for direct service. Expanding options led to an increase in orders, a reduction in delivery time and cancellations, and an improvement in overall customer ratings, Niccol said.

And as it has for some time, Chipotle continues to look at third-party delivery as an acquisition tool for its digital suite.

“We've heard from our consumers, if you look at the qualitative side of it, hey, look the convenience of ordering ahead and picking up was something they discovered as a result of bringing them into our business through the delivery channel, which I think is kind of surprising,” Niccol said. “I don't think people realized that [customers] would join the Chipotle digital system because they came in through the delivery occasion. We brought them into the system and then we gave them the experience of the order ahead.” Chipotle’s order ahead is growing about 20 percentage points faster than its delivery.

Currently, about half of the 50 percent mix is coming from order ahead and pickup transactions, while the remaining flows from delivery. The growth in pickup stems from less frequent free delivery promotions, Chipotlanes, and consumers realizing the value of a pickup order with no fees, Niccol said.

Over time, Chipotle hopes to migrate delivery business to not just an acquisition tool, but also to become an occasion. One where it won’t mind the trade-off between delivery and order ahead. The chain started charging $1 for delivery in Q2.

Niccol said a big lure for guests on the white-label side is its rewards attaching to direct channels. This received a pandemic boon, too. Chipotle has added about 3.5 million loyalty members since April.

“Obviously the fact that so many people switched to our delivery and digital business over the last couple of months really enabled us to get people to engage in the rewards program,” Niccol said. “The thing that has been really refreshing is a lot of folks that have joined our rewards program have been new users or light users.”

“And so, we're already using these customer journeys to start influencing behaviors so that we can have them [become] be a more frequent customer,” he added. “And I think that's going to prove to be a nice tailwind for us in the future because I don't think we're done at 15 million. I think 15 million is going to become 20 million and so on and so forth.”

In early days, Chipotle witnessed higher frequency of transactions from rewards members versus non-members. Niccol said they’ve started to leverage this growing installed base with personalized promotions to incent behaviors, especially given more than 70 percent of current digital orders are from loyalty users.

“We're also using this tool to help make our digital platform stickier by reengaging customers if their usage drops,” he said.