The end goal is to reduce volatility of bone-in wing prices for franchisees and gain better control of the supply chain.

Fast Casual | May 18, 2022 | Ben Coley
Wingstop
One facility would account for 20 percent of overall wing buy.

Wingstop knows what it takes to reduce future volatility of wing prices, and one plan isn't enough.

CEO Michael Skipworth said it will likely require a combination of methods. Thus far, it's been price mitigation strategies with the company's largest poultry suppliers and use of the whole bird, like virtual concept Thighstop and testing of chicken sandwiches using breast meat.

The next step, which the chain recently revealed at its Investor Day, is potentially co-investing in a poultry production plant. After that, it's acquiring a facility. Wingstop would set it up with initial capitalization and sell it to a co-op managed by franchisees so the fast casual maintains its asset-light model. Longer-term, the idea would be for the company to build a facility of its own.

It's important to note, however, that one poultry complex would account for just 20 percent of overall wing buy, meaning a significant portion would still come from existing supply partners.

The company worked with third-party experts to understand what it takes to run a poultry plant, and it found bone-in wing prices are more stable and predictable, ranging from $1.60 to $1.80 per pound. 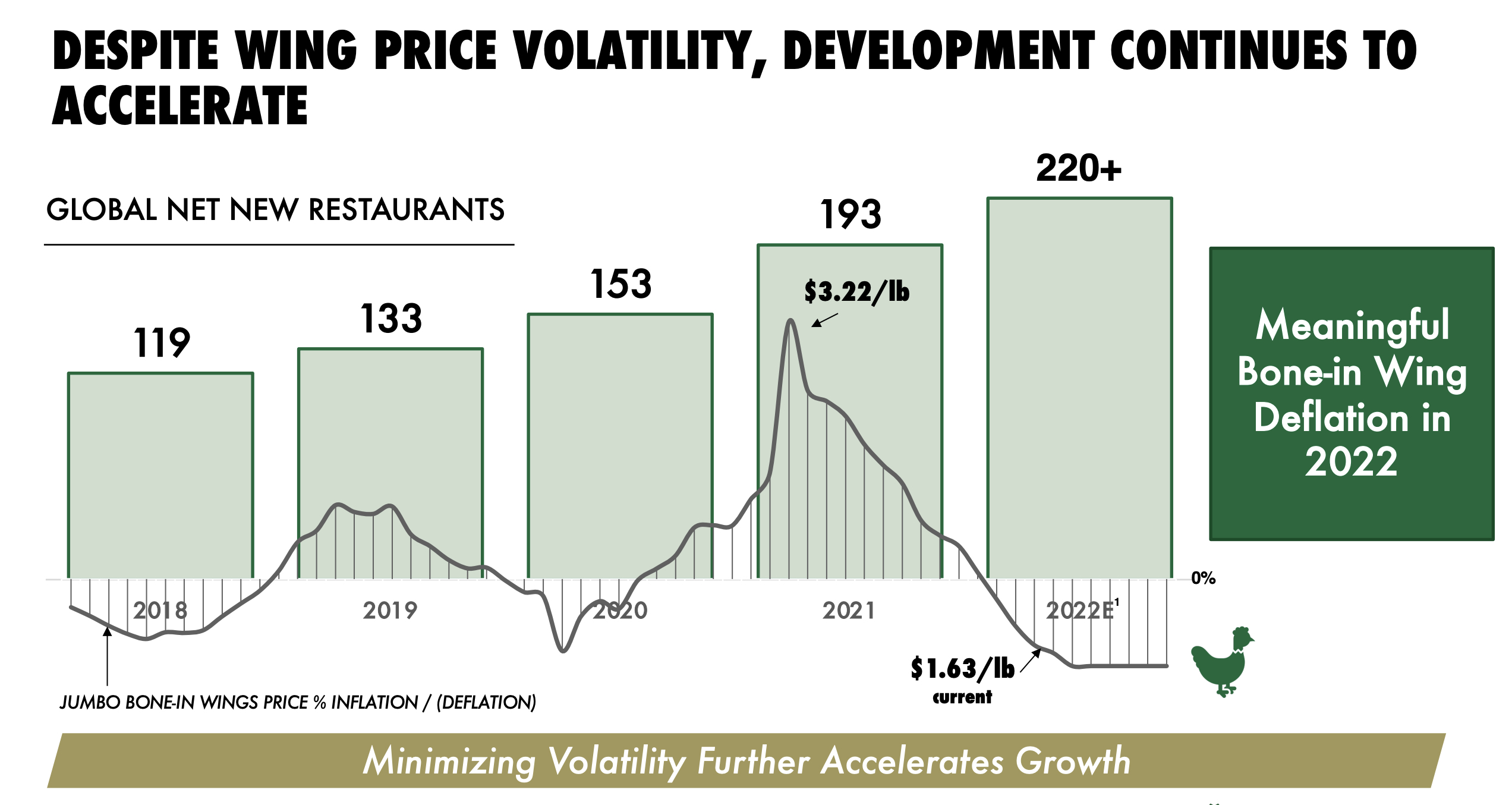 Skipworth said there's a short list of potential acquisitions, but he had no specifics on timing. He noted the brand left "a little bit of excess cash" on the balance sheet to put itself in an opportunistic position.

"We've built a very detailed working model that takes all the various inputs that are involved in growing and harvesting a bird as well as all the feed and input costs and the financial implications of operating a poultry complex," the CEO said during the fast casual's Investor Day. "And we feel as though our strategy has been validated by the experts."

Former Wingstop CEO Charlie Morrison told analysts in November the company was working with franchisees to gain more control of its supply chain, with the goal of creating predictable food costs for operators. At the time, the average spot price for bone-in wings reached a record $3.22 per pound, an 84 percent increase year-over-year. But thanks to price mitigation agreements with suppliers, the effective increase was just 49 percent.

READ MORE: Wingstop's COVID Journey Gets Bumpy, but Not Uncomfortable

Recently though, the chain has experienced relief, with wing prices deflating to $1.64 per pound on the spot market. The company paid 14 percent more for wings in Q1 year-over-year, but that’s due to lapping lower prices in the early part of the quarter. As Wingstop exited Q1, prices “declined dramatically and continue to provide a tailwind,” said CFO Alex Kaleida. 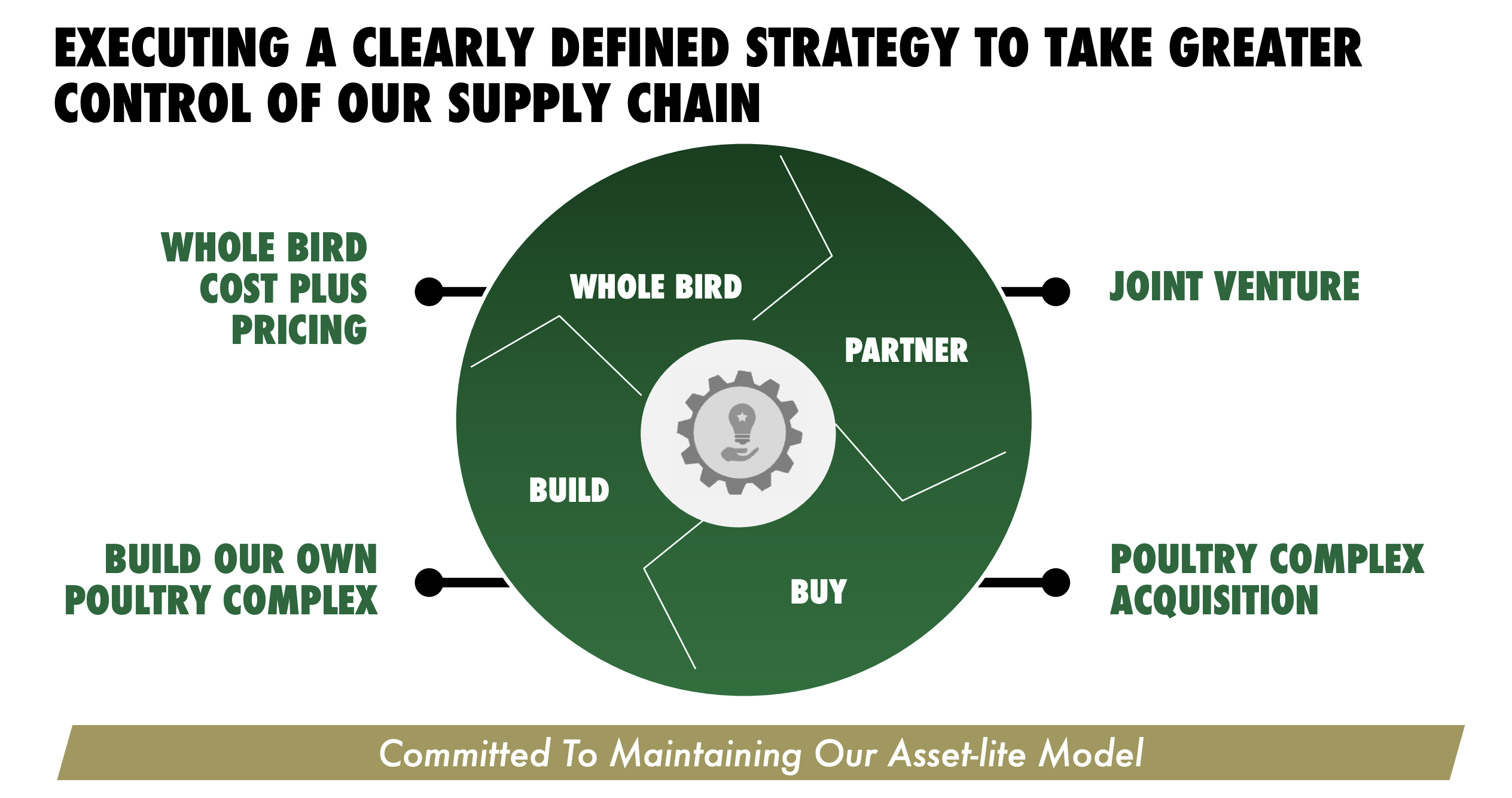 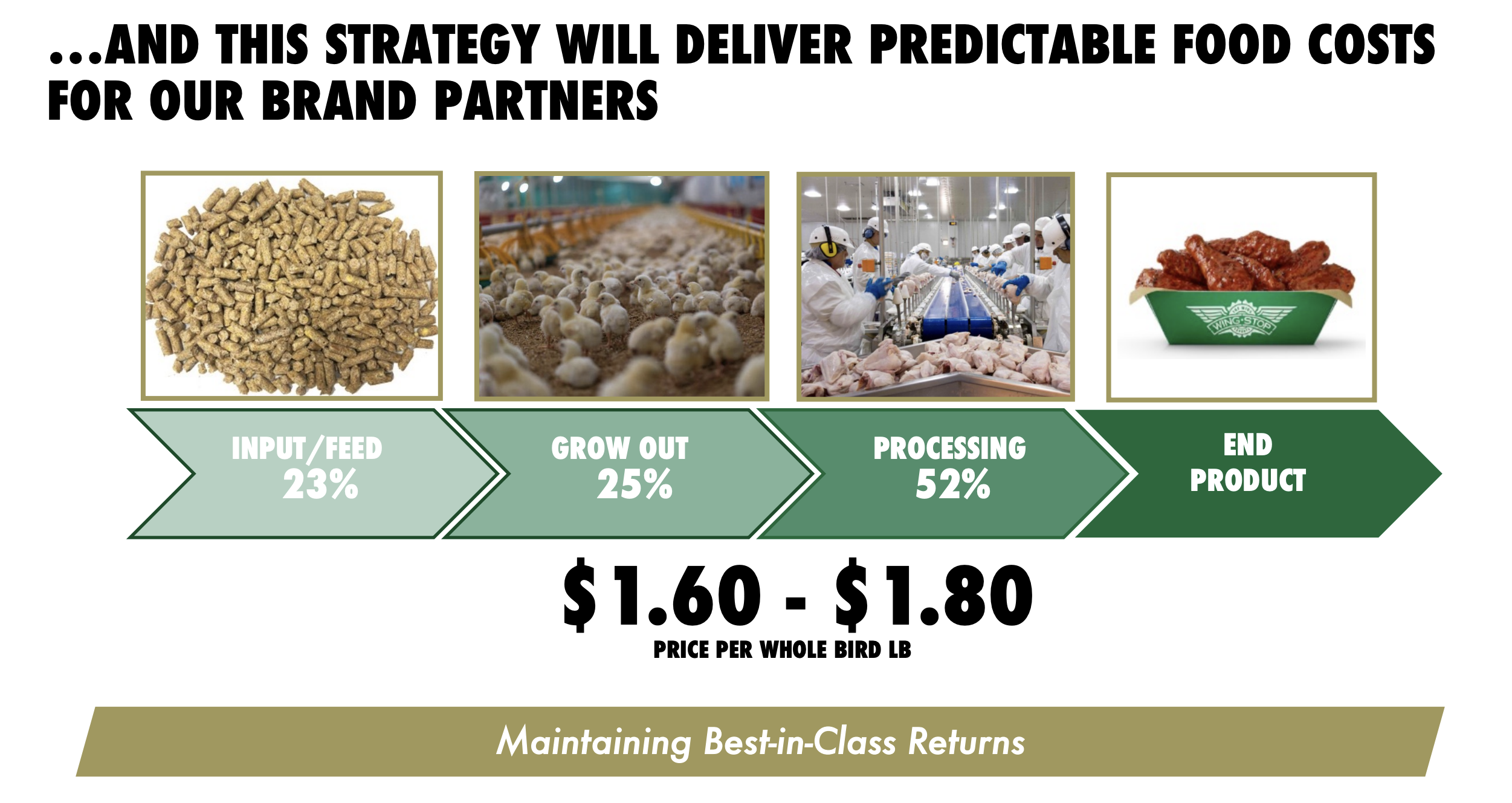 The chain's objective is to keep inflation from skyrocketing like it did last year.

"We know that if we can minimize the volatility that our brand partners see in food costs that the pace of development will only accelerate," Skipworth said.

The more favorable commodity environment encouraged Wingstop to increase its 2022 unit development benchmark to more than 220 net new restaurants, which would smash last year's record-breaking 193 net new openings. This puts the chain on pace to surpass 2,000 restaurants worldwide in 2023.

Wingstop already opened a Q1 record 60 net new locations. The brand finished the quarter with 1,791 stores, including 1,588 in the U.S. and 203 internationally. The long-term goal is to reach 7,000 restaurants across the world, up from the previous benchmark of 6,000.

"Cash flows for our brand partners are extremely strong right now,” Skipworth said earlier this month. “And I've recently spent a bit of time out in market visiting with brand partners, and hearing the sentiment and the excitement about growing with Wingstop was extremely encouraging and gives us a lot of confidence in what's in front of us and the ability to deliver a record development here in 2022.”

The fast casual wants to reach $2 million AUV, up from its current $1.6 million, fueled by menu innovation, delivery, and digital. It will also be backed by Wingstop's plan to consolidate local ad spend into one national fund. The company said this move, along with system sales growth, should increase national media spend to more than $120 million this year, up from roughly $85 million in 2021 and $41 million in 2018, according to a note from BTIG analyst Peter Saleh.

Wingstop's same-store sales increased just 1.2 percent in Q1, it's lowest quarterly performance since COVID began. It plans to rectify sluggish sales growth by reopening dining rooms and passing along deflation to consumers in the form of value.