The fast casual believes it's capable of 7,000 stores globally, up from its 6,000-unit projection.

Wingstop is almost seven years removed from its IPO, and the decision is aging quite well.

In the time since—a global pandemic notwithstanding—shareholders have experienced a nearly 900 percent return, including about $500 million in cash via dividends. Domestic same-store sales growth has averaged 8.7 percent, annual new unit development 13.5 percent, system sales have increased by an average of 19.4 percent, and adjusted EBITDA growth 20.2 percent.

Even with historic inflation, a muddy labor market, and competition against 2020’s record-breaking results, Wingstop’s momentum continued in 2021.

Now, the only move Wingstop could make is to raise expectations for itself. That’s why the fast casual no longer seeks 3,000 locations nationwide; that goal was bumped to 4,000. Internationally, the brand is still eyeing 3,000, meaning the restaurant believes it has room for 7,000 stores globally in the years to come.

“We are not concerned with what’s going to happen in any given quarter,” CEO Charlie Morrison said during Wingstop’s Q4 and 2021 earnings call. “We see that the economy could slow down later in 2022, but we will stay true to our strategy. Shareholders expect us to deliver long-term sustainable growth even in the face of headwinds that might cause other brands to slow. That has been the experience so far, and we intend to continue our long-term growth.”

Wingstop ended the year with 1,731 stores across the world, including 1,498 domestically and 197 internationally. The chain also finished with more than 1,100 commitments systemwide.

In 2022, the brand expects mid-single-digit same-store sales growth and 200 net new restaurants, putting the brand on pace to eclipse 2,000 locations globally in 2023.

Morrison’s confidence in the bolder expansion strategy is backed by a number of growth levers. Firstly, fortressing core markets remains a focus. For instance, the chain’s home base of Dallas had about 80–90 restaurants when it went public, and that’s grown to 130 and counting.

But the mix of assets will be the game-changer. The company entered Manhattan with a ghost kitchen and complemented it with streetside locations. Morrison said unadvertised ghost kitchens tend to start slower purely because of visibility, however, they collectively appear to have a cadence similar to regular new units, with AUV starting in the low-to-mid $1 million range—even more impressive considering Manhattan’s office presence hasn’t fully returned to pre-pandemic levels.

The CEO estimated 60–70 percent of new restaurants this year will be streetside, while the remainder will be ghost kitchens. The brand opened three stores in Manhattan in 2021, and six to eight more are planned in 2022. 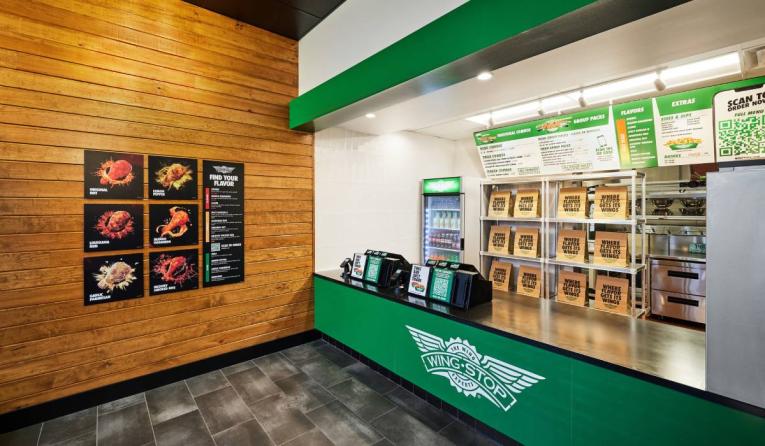 Wingstop also unveiled a cashless, off-premises-only restaurant in Dallas that’s 1,300 square feet, or about 400 square feet less than a typical restaurant. If a customer didn’t order online or through the app, they can scan a QR code inside the store to initiate the ordering process. The unit is equipped with what Morrison calls a “refocused kitchen that we believe will be more efficient.”

“All of those factor into what will be generally a much smaller, more stealth execution of the brand, which means it’s playing upon the experience we’ve seen so far at over 60 percent digital, heavy delivery focus, and the fact that we haven’t still opened a vast majority of our dining rooms across the country here in the U.S,” Morrison said. “We believe the brand is well-positioned to be able to show up just about anywhere.”

The fast casual will support growth with a new marketing approach in which local and national funds will be consolidated, increasing total spend to more than $100 million.

Morrison said the strategy leans into Wingstop’s targeted 1:1 marketing platform that leverages a database of more than 27 million. This involves transitioning from a promotional brand to more of a martech platform.

“We can use that money much more efficiently on a national basis than we can on a local,” the CEO said. “… Our ability to market to [customers] 1:1 is much more efficient than more of a scattered approach in a local market. The other thing we notice is, we don’t need to be buying Facebook advertising at the local level just to buy it also at the national level. We can consolidate that purchase and in many cases, do substantially better—30-40 percent better with our money.”

Wingstop is coming off a year in which the spot price of bone-in chicken wings—which make up 65 percent of all product purchases—rose more than 70 percent. In Q4, cost of sales increased 8 percentage points, primarily due to record-high wing prices. Urner Barry prices for jumbo wings grew 41 percent in Q4 year-over-year, but restaurants only felt a 27.5 percent uptick thanks to mitigation strategies, like using more of the bird.

The brand believes the worst part is now over after seeing sequential improvement in company-owned restaurant margins. Prices have lowered to $2.60 per pound, down from a record $3.22 in the third quarter. Year-over-year deflation in wing prices is anticipated for the second half of 2022.

“We’re working with a lot of outside experts on what the right strategy is for Wingstop long-term in terms of taking more control of the supply chain,” Morrison said. “Right now we don’t have anything specific in front of us, other than we clearly understand what efficiencies we can generate for the system once we achieve that ability to generate more control and alleviate ourselves from the spot market.”

“In the meantime, we’re not going to allow a drop in wing prices—which we expect to see—to keep us on the sideline on that initiative,” he added.

Labor, however, has presented little conflict to Wingstop. Morrison said wage rate inflation has been a challenge, but the chain is achieving a roster fill rate of about 80 percent, which is enough to staff a restaurant on full volume. Units can operate with as little as four or five workers in the back of house.