How Wendy's is Navigating an Inflationary Puzzle

Traffic is down across the quick-service industry as prices hike. But could that change?

Despite top-line gains across much of the quick-service sector in recent months, recovery has owed more to price than traffic. According to Revenue Management Solutions, transactions declined 4.3 percent in July, year-over-year, but an 11.7 percent jump in price kept net sales positive at 4.3 percent over 2021. Quick-service average price, in particular, was 11.8 percent higher as basket size declined 2.7 percent.

A study from RMS showed 50 percent of respondents had visited a limited-service restaurant at least once in the past month. And of those, more than one in three went because of a “special deal.”

So where is the market share going? Wendy’s CEO Todd Penegor believes it’s a simple answer. Food at home, pre-COVID-19, represented about 82 percent of meals consumed. During the pandemic, it climbed to about 85 percent, for clear-cut reasons—customers locked down, many restaurants weren’t open, guests were unsure what was safe and what wasn’t, even when it came to packaging, preparation, and rolling down the window of their cars.

Yet that number has been fairly sticky, Penegor said. Back in May 2020, Simon-Kucher & Partners, a global strategy and marketing consulting firm that works with brands like Chick-fil-A, Shake Shack, and QDOBA, put the shift at about 4 percent. Going off the National Restaurant Association’s $898 billion sales projection that predated COVID, you were looking at about $50 billion out of restaurants and into consumers’ homes.

Penegor said this has resurfaced two-plus years later because diners are strapped due to inflation. “So there is a few more meals prepared at home, whether it’s bringing your lunch to the office or having breakfast at home,” Penegor said.

Overall wage rates have increased, but inflation has skyrocketed. So consumers’ net disposable income has been pinched, Penegor said. “But over time, that will shift and that consumer that will have more disposable income will be right in the wheelhouse of continuing to drive [quick-service restaurants] and driving Wendy’s business, which will drive traffic into the future,” he said.

Like category peers, Wendy’s strong check growth has fueled performance. The brand’s U.S. same-store sales climbed 2.3 percent in Q2 against last year’s lap of 16.1 percent. Global comps increased 3.7 percent over 17.4 percent, which marked the third straight period of double-digit two-year growth. Wendy’s accelerated versus the prior quarter on a one- and two-year basis—results that translated into a nearly 300-basis-point sequential expansion in company-operated restaurant margins, despite the inflationary landscape. On the latter for Wendy’s, commodity inflation in Q2 was about 19 percent and labor inflation 12 percent.

Wendy’s hit its 12th consecutive quarter of gaining or maintaining dollar share within the quick-serve burger category. It got there through marketing and price lifts, Penegor said. The chain expects to take an additional 2 percent of price in Q3, which would put it slightly below 10 percent for the year as the back half of the calendar arrives. CFO Gunther Plosch said guest pushback thus far has been immaterial. Wendy’s held traffic share for consumers making less than $75,000, he said, and the brand is seeing roughly 80 percent flow-through on pricing.

“We are starting from a position of strength,” Penegor added. “We continue to see strong check growth. It has been offset a little bit by a decline in customer counts in Q2. And we have seen a little bit of a decrease in mix driven by a reduction in items per transaction. That’s really due to a decrease in party size and fewer attachments along the way. But when you look at our year-to-go calendar … we have got some really good innovation.”

Dining room mix has climbed to 21 percent as well.

Wendy’s recently relaunched its $5 Biggie Bag in an effort to provide further value, yet also offer a trade-up option from other deals, such as the 4 for $4. The brand paired the return of its Summer Salad with the Strawberry Frosty. Penegor said it drove year-over-year customer count growth as Wendy’s exited the period.

Where the brand heads next will reflect the consumer, he added. The brand’s high-low strategy is “hanging in there quite nicely.” News on the high end to bring consumers in, value as an entry point for those who seek it.

“The piece that we are all watching is we have seen some declines in frequency in the category, but beyond that, we are really confident that we got a lot of loyalty to our brand. And when the consumer gets healthier, we will drive the business hard going forward,” Penegor said.

“Those give us confidence that we have a menu construct that can connect to that consumer and we can continue to build on that momentum,” he added of the recent innovations. “And we also are seeing an improving labor market. So we do continue to see staffing improve. We see 90-day turnover levels improving. We see turnover rates coming down. All of those things will allow us to drive more throughput as we’re focused on speed in our restaurants to make sure that we can serve more customers in this environment to continue to drive more traffic from an operational expectation experience with better service times at the restaurant.” 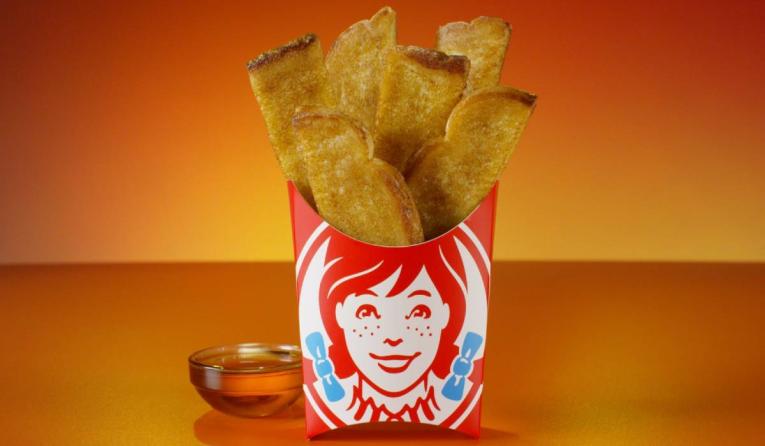 Wendy's French Toast Sticks could help the brand draw in families for breakfast.

A drop back on REEF

One of the pulsing topics of Wendy’s Q2 recap was its decision to readjust its REEF plans. The company announced a deal with the delivery-kitchen operator in August 2021 to open 700 models over the next five years across the U.S., Canada, and the U.K.

That figure is now only 100–150, with the majority operating internationally in Canada and the U.K. There are two factors deflating the former outlook. The main is REEF’s decision to shift strategy to operating multiple brands from its locations. The other is U.S. stores are producing AUVs at $500,000 or less (it’s between $500,000 and $1 million in other markets).

Wendy’s is working to reposition vessels into better trade areas. Penegor said the opportunity remains largely in urban markets, where Wendy’s has long been underpenetrated versus top-tier competitors. And it will target that whitespace, whether it’s “cracking the code with REEF, finding another partner, thinking about other ways to traditionally grow into some of those markets,” he said.

“REEF really wanted to shift operating multiple brands from its locations, and they have had some recent challenges with opening some delivery kitchens in certain locations with what it takes to work through the permitting in those markets,” Penegor said. “So we thought it prudent to call down that number.”

Simply, Wendy’s did not want multiple brands out of its kitchens. “We want to dedicate it to Wendy’s, so we will be slow and steady,” he noted. “We still think there is a great urban opportunity to continue to provide access to our brand with some kind of concept in those markets.”

Through the end of July, Wendy’s had more than 70 percent of its total 2022 new unit growth open or under construction. There are over 200 potential franchise candidates in the pipeline. Year-to-date, Wendy’s has opened 74 locations (net of 45) and 140 globally (net of 91).

In an email to QSR, a REEF spokesperson called Wendy’s, "an early adopter of the REEF model and one of the most forward-thinking of our partners."

"We are excited to continue innovating together with a focus on doubling down internationally where we’ve seen very strong economics in our current partnership," the company continued. "As REEF continues to focus on profitable growth we are committed to increasing productivity and efficiency by delivering multiple brands from every kitchen in our ecosystem—when deploying our multi-brand model we have already seen the average sales per kitchen double over the last year.”

Breakfast and other trends

Wendy’s maintained breakfast sales volumes versus the prior year and grew its category meal share, Penegor said. The activity was fueled by another run of Wendy’s Buck Biscuit promotion and awareness messaging. Sales volumes reached north of $2,700, up from $2,500 in Q1, and ahead of the breakeven mark of $2,000. Despite challenges in the daypart as consumer mobility remains soft, Wendy’s expects year-over-year U.S. breakfast sales growth of about 10 percent this year, as well as reaching its $3,000 weekly target.

French Toast Sticks, which launched in August, should generate incremental visits and add-ons, Penegor said. Additionally, it gives Wendy’s a product to draw in families and kids, which it hasn’t had previously. Wendy’s has $16 million committed globally this year to breakfast advertising.

“If you look at the category, you’re seeing more folks consume their food at home and grab the drink on the way. So you’re seeing folks grab a C-store beverage or seeing folks go to the traditional coffee houses,” Penegor said. “A lot of the function of the share growth is when you look at some of the year-on-year comparisons. And there is still a little bit of noise out there in the comparisons. So you have seen the overall [quick-service] burger category and breakfast soften. We actually held our growth year-on-year.”

Global digital sales reached mix of 10 percent in Q2. International boasted about 15 percent and some markets, like Canada, are witnessing especially strong digital usage for breakfast. In the U.K., for instance, digital eclipsed 70 percent.

Stateside, it comprised just over 9 percent of overall sales in Q2 and bumped 2.5 percent quarter-over-quarter. Wendy’s grew its monthly active users by 5 percent.

Wendy’s also recently unveiled a new global restaurant design the company expects to lower build costs by about 10 percent. It will focus on optimized layouts that “deliver convenience, speed, and accuracy for our crew and our customers across all order and fulfillment channels,” Penegor said.

What it broadly does, Plosch added, is embrace digital in Wendy’s design. It has a dedicated delivery pickup window. The kitchen is reconfigured. “So, literally, you have to do way less steps to get all your tasks done,” he said. “That drives operating efficiencies. And we are also embracing whole mobile orders with all shelving and dedicated shelving units and dedicated parking, so that the friction for the consumer is much more reduced and the friction for the crews is much more reduced.”