A War for Fast-Food Wages Takes Center Stage in California

The FAST Act would allow the government to set rates.

The FAST Act, or Fast Food Accountability and Standards Recovery Act, has stirred heated response following its passage by the California State Legislature on Monday.

The National Restaurant Association released a statement late Tuesday suggesting the bill wouldn’t “achieve its objective of providing a better environment for the workforce.” Rather, “it’s going to force the outcomes our communities don’t want to see,” Michelle Korsmo, president and CEO of the Association said.

“It’s rare that a state legislature passes a bill that would hurt small businesses, their employees, and their customers, but California’s FAST Act does just that,” she added. “Even the Governor’s own Department of Finance said AB 257 would increase costs. This comes at a time when inflation is at record highs and families are struggling every month.”

At its core, the Fast Act would create a 10-member council appointed by the governor, speaker of the assembly, and the Senate Rules Committee. Two fast-food franchisors, two franchisees, two advocates of workers’ rights, one representative from the Department of Industrial Relations, and one from the Governor’s Office of Business and Economic Development, would fill seats as well. Additionally, cities and counties could establish local fast-food councils to address regional issues.

Central to the Act is the panel’s ability to regulate quick-service wages. They could raise the minimum wage to $22 per hour in 2023 and 3.5 percent annually each year after. Presently, California’s wage floor is set at $15 and is expected to reach $15.50 at the start of next year.

“For restaurant operators, the FAST Act threatens businesses already contending with a 16 percent increase in wholesale food prices and ongoing supply chain challenges. In fact, 45 percent of California’s restaurant operators report that their business conditions are worse today than they were three months ago,” Korsmo said, referencing a study the Association conducted recently. In that poll of more than 4,200 operators conducted from July 15 to August 5, a majority of restaurants said they don’t expect a return to normalcy in the foreseeable future, with 41 percent projecting it would take more than a year, and 12 percent 7–12 months. Nearly 30 percent felt business conditions might never return to normal.

And to Korsmo’s comment on costs, an overwhelming number noted dues were higher than pre-pandemic totals; 88 percent said as much for food and beverage expenses, 86 percent for labor, 65 percent for occupancy, 80 percent for utility, and 94 percent for operations. To mitigate these challenges, 91 percent said they’ve increased menu prices. Overall, according to federal data, restaurant menu prices hiked 7.6 percent in July, year-over-year. That's slightly below June's inflation, but still near a 40-year high. The price of full-service meals rose 8.9 percent, while quick-service menu prices increased 7.2 percent.

This as grocery prices soared 13.1 percent in July—creating the biggest difference between restaurants and the segment since the 1970s.

Meanwhile, some familiar pressures have lingered since COVID’s onset. Development plans have slogged due to rising construction costs and lead times, as well as labor challenges. The latter is also leading to reduced operating hours for some.

Data from the UC Riverside School of Business said minimum wages set between $22 and $43 would inflate labor costs by 60 percent and increase prices by 20 percent.

About 24 percent of operators in the Association’s survey said they've incorporated more technology to combat headwinds, and 16 percent were forced to cut third-party delivery to save costs. Roughly 85 percent added they were less profitable compared to 2019.

The BLS estimated hourly restaurant wages had climbed at a double-digit pace since April 2021 before retracting to 9 percent in June. Average hourly earnings fell in July for the first time since May 2020 (negative 0.16 percent). Even so, they’re roughly 8 percent above year-over-year levels.

“Nine in 10 restaurants are small businesses that employ fewer than 50 people,” Korsmo said. “This bill sends a clear message that the state legislature doesn’t understand the importance of these employees to the small business owners operating not just franchise restaurants, but also bakeries, juice bars, pizzerias, delis, salad shops, and so many other quick-service establishments on which Californians rely. It’s these local businesses that provide people first jobs, career opportunities, and support their communities.”

International Franchise Association president and CEO Matthew Haller took an aggressive stance against the Act as well. He called it a “discriminatory measure designed to target the franchise business model.”

“The bill creates an arbitrary standard for one sector of workers while punishing small business owners and their customers,” Haller said in a statement. “Franchising has opened the door for hundreds of thousands of entrepreneurs to pursue their dreams and millions of workers to establish a career, but this bill stands to break all that down while raising prices for Californians and forcing restaurants to close their doors. Gov. Newsom should stand up for local businesses, the people of California, and responsible government, and veto this legislation.”

The IFA said the Act’s structure was based on a “flawed premise” that working conditions in the counter-service field were worse than other food sector establishments.

“But a recent analysis suggests this assertion is categorically false and not supported by the state’s own data,” the IFA said.

The California Business and Industrial Alliance, a trade organization founded in 2017 by business executives and entrepreneurs to address the Private Attorneys General Act, said in August, “the [Service Employees International Union] has cherry-picked anecdotes of worker hardship, it has yet to produce neutral data showing that the fast food industry is a uniquely-bad violator worthy of special treatment.”

The data the IFA called out hails from the Employment Policies Institute, which analyzed about 10 years of wage claim data from the California Labor Department. It reported limited-service restaurants accounted for 1.6 percent annually of total average wage claims filed with the state from 2017 through 2022. Using an adjusted data set that included restaurant locations potentially miscategorized by the state, limited-service restaurants averaged 2.3 percent of all wage claims. Across all years of data analyzed, there was roughly one wage claim per 1,000 private sector employees in limited service. And the industry accounted for 1.5 percent of total Private Attorneys General Act lawsuits in all industries where awards were granted to employees, and 1.8 percent of all dollars awarded to employees.

Also, the report stated the segment’s share of total industry claims has remained steady every year throughout this period and has not increased meaningfully in recent years. The quick-service space represents 3.2 percent of the overall employment in California and 1.8 percent of California establishments. 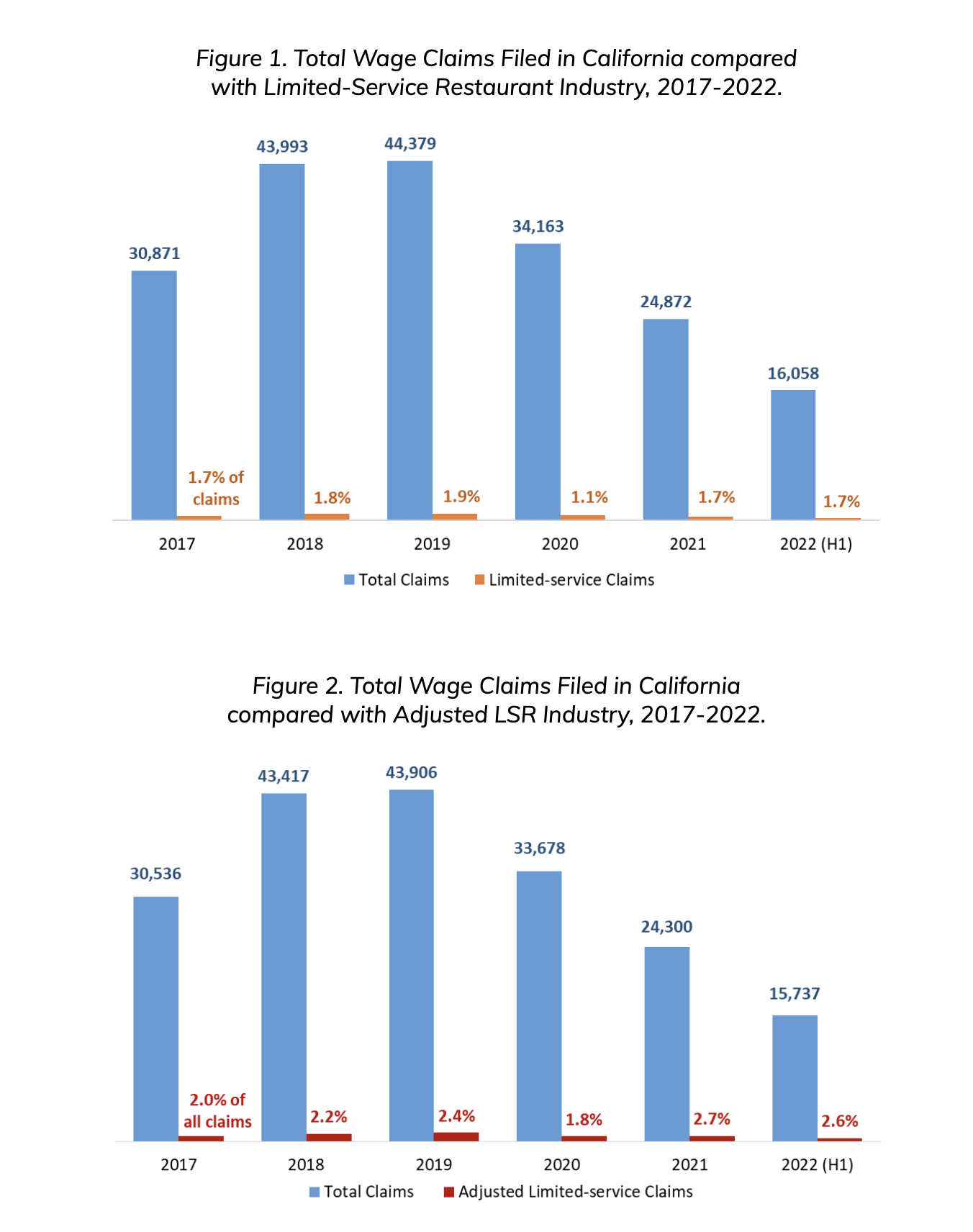 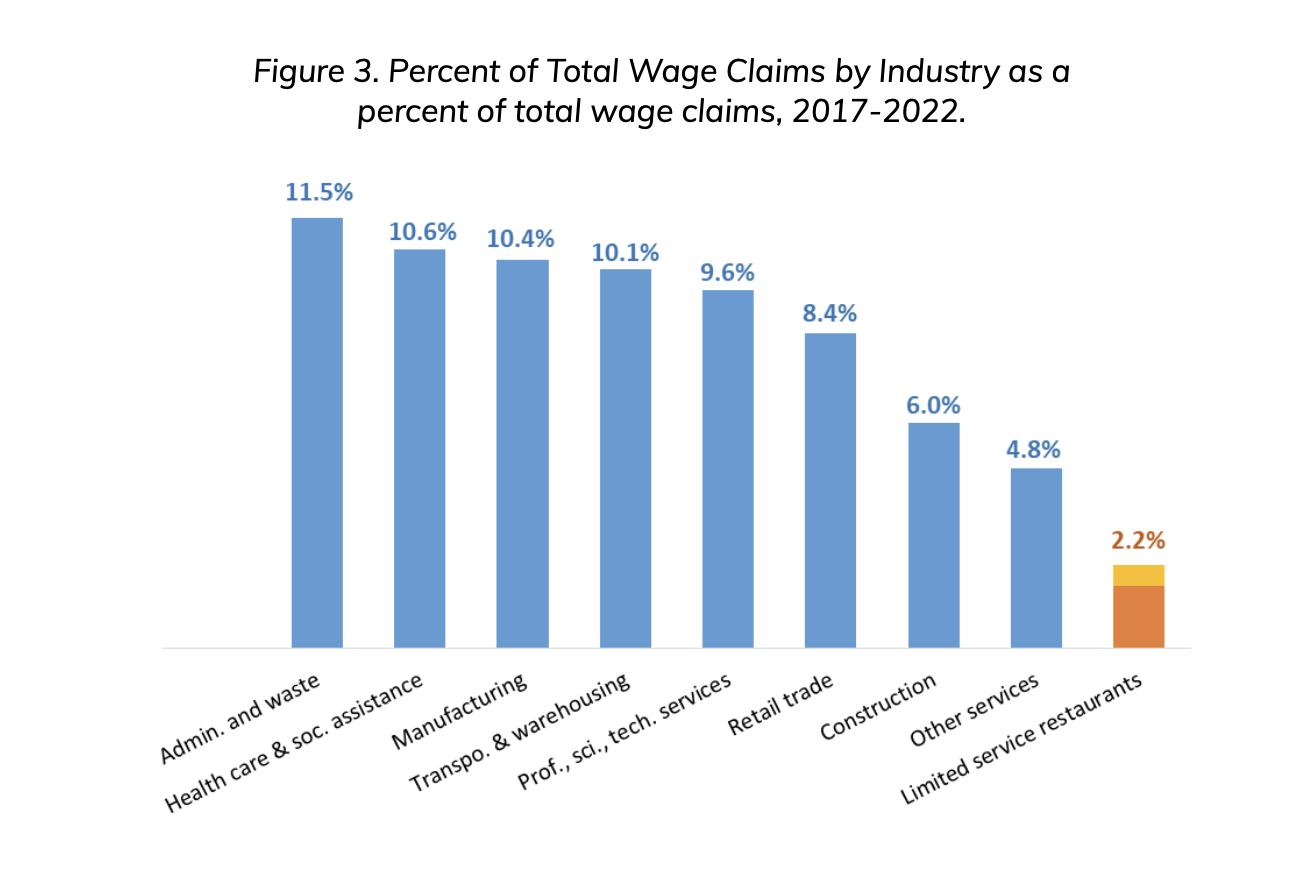 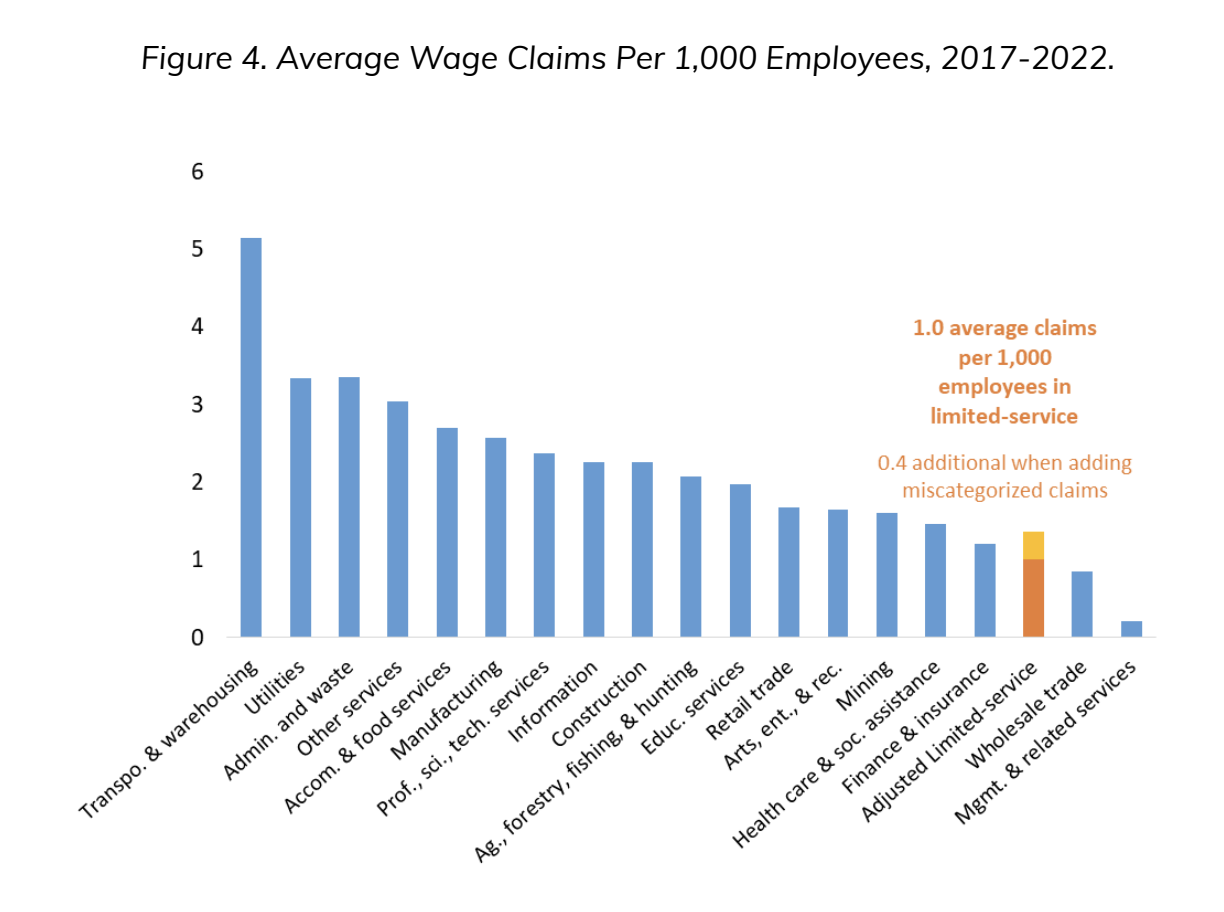 Charts from the Employment Policies Institute

From a wage perspective, however, Harvard and the University of California San Francisco released a study that said fast-food workers were paid 85 cents on the dollar compared to non-fast-food service employees.

A coalition of California small business owners, restaurateurs, franchisees, employees, consumers, and community-based organizations created “Stop AB 257” as the bill gained steam. The IFA is a member and so is the California Restaurant Association. Here’s a full list of the organizations involved.

The campaign on Monday called the legislation “reckless” and “costly” and said it was “out of touch with the financial realities across California, opting to pass this 20 percent food tax on to the California counter-service diner.”

“Skyrocketing costs for food, gas, and rent are crushing consumers and local restaurants alike,” the campaign said. “Now the legislature is increasing food prices to fund an unelected Council, bringing special interests into the state government. The council usurps power from state agencies who are underfunded and under-resourced to protect workers.”

Jesse Lara, an El Pollo Loco franchisee in Southern California, added in a statement, “even during this time of historic prices, we have resisted price increases on our customers because we know they can’t afford it. Governor Newsom knows that if AB 257 becomes law, small businesses like mine will face no choice but to raise prices to stay afloat or be forced to shut our doors.”

Sanna Shere, a Burger King franchisee based out of southern California, said it would “effectively dismantle California’s franchising business, which has afforded so many women and minority entrepreneurs a higher rate of business ownership across the state.”

In it they wrote, “not only do franchise models provide minority entrepreneurs with uncharted economic opportunity, but the franchise model represents a key pathway towards achieving the American Dream while also generating employment, revenue, and opportunity for their immediate communities.”

According to the Wall Street Journal, labor unions have collectively spent more than $5 million to lobby legislators since the start of 2021 and Chick-fil-A, Jack in the Box, Chipotle, Burger King, Chipotle, and In-N-Out spent more than $1 million in lobbying efforts against the bill. The IFA has spent $615,000.

After the State Assembly re-approves the bill, it will head to Gov. Newsom's desk to be signed into law. He has until September 30 to do so.

On the other side of the debate, the Fight for $15 and a Union said AB 257 “would protect and empower California’s fast-food workforce, which is majority Black and Latino, with a voice on the job to help set minimum industry standards around wages, safety, and training.”

“Today’s win in the Senate shows what’s possible when working people unite and raise our voices,” said Anneisha Williams, a Los Angeles fast-food worker and leader in the Fight for $15 and a Union, in a statement. “Fast food workers like me have done whatever it takes to elevate our demand for AB 257—we’ve gone on strike, marched in the streets and rallied across the state. We’ve shown the world we can take on the most powerful corporations and win. We look forward to Governor Newsom signing AB 257 into law and empowering us to create safe and healthy workplaces across the fast-food industry.”

The organization said California fast-food workers have waged more than 400 strikes and filed “nearly 300 healthy, safety, and wage complaints” over the “years-long fight” to get AB 257 passed.

“AB 257 creates minimum standards for wages and work conditions, protects workers from being fired for organizing and establishes sectoral organizing with a fast food worker council,” added Asm. Chris Holden (D-Pasadena), the author of the legislation and a former fast-food franchisee, in a statement.  “I’m proud to have ushered an inclusive approach to the industry by giving employees the chance to be included in a process that has always impacted them.”

Fight for $15 said AB 257 will address long-standing issues by giving workers and franchisees a seat at the table. And will enable “fast-food cooks and cashiers the power to raise the industry-wide minimum wage to up to $22 per hour. Similar to the state minimum wage, the industry minimum wage would adjust annually based on the Consumer Price Index.”

Reps. Ro Khanna, Barbara Lee, Karen Bass, and five other members of the California delegation sent a letter to Newsom in favor of the bill. “Investing in organizing models like AB 257—that include workers in the decision-making process—is key to addressing rising income inequality, increasing the country’s labor participation rate, and getting Americans back to work nationwide,” it read.