After 33 Months of Negative Sales, Krystal is in the Black Again

Paul Macaluso has engineered one of the industry's biggest comebacks in the past year with Krystal.

Krystal’s comeback has taken hold in a variety of ways over the past year. This note might be the biggest, though: After 33 months of negative sales, the iconic burger brand, year to date, is in the black again.

Macaluso, who came on board last April after a run with FOCUS Brands, including serving as president of McAlister’s Deli, sat on a panel called “The Franchising Think Tank” with Huey Magoo’s president Andy Howard, Auntie Anne’s president Heather Neary, and Kelly Roddy, the president of Schlotzsky’s.

Among the topics the panel covered were employee engagement and recognition, and how both inspire recruitment and retention in an ever-tightening labor market. Krystal’s Square Up Scholarship program selected 15 employees to receive $37,500 in scholarship awards in mid-February. A new application window opened February 15 and closes April 1, with an additional $50,000 allocated for eligible employee “who demonstrate leadership, community involvement and a desire to advance their careers through education.”

Krystal also has a new mobile recognition program where managers can award points and gift cards to employees, and employees can recognize each other.

There are a lot of changes Macaluso has championed during his run with Krystal so far. A key one being turnover, which has dropped 27 basis points from 217 percent to 190 percent in 12 months.

On the new design note, Krystal’s “scrape and rebuilds” witnessed sustained sales-volume lifts of 70–80 percent. The volume was so high, in fact, the chain needed increase staffing an average of 66 percent in redesigned units, from 30 to 50 employees. Krystal plans to redesign 75-100 units over the next five years, which would cover roughly 40 percent of its corporate portfolio. 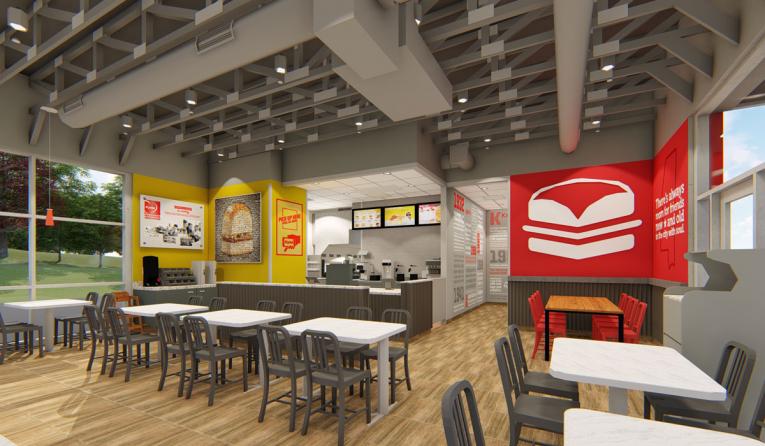 A look inside Krystal's new prototype. 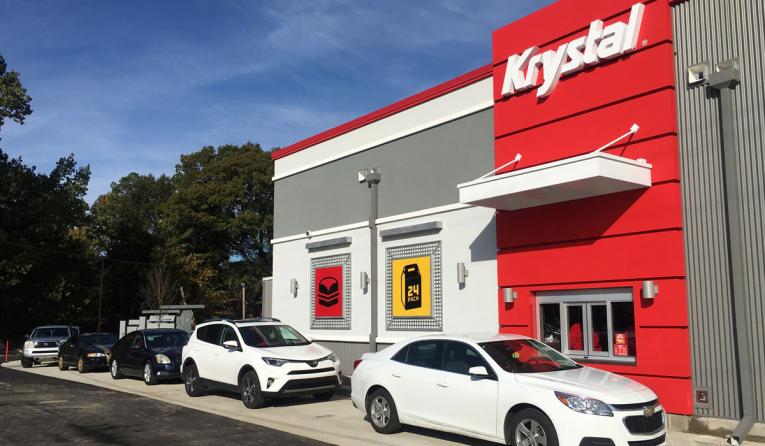 Krystal's new design has two drive-thru lanes that funnel into one.

An important change as well was the addition of two lanes to the drive thru. Krystal appreciates 70 percent of its business through the channel and Macaluso wanted to make sure the brand was doing everything it could to streamline those orders. The new stores optimize the experience with two lanes that funnel into one. There are two speaker boxes and menuboards so the staff can take multiple orders at once. There are also optimized work areas inside that enable Krystal to quickly fulfill drive-thru orders without extra steps.

Inside the restaurants, Krystal started adding double grills and expanding the work area by about 2 feet to handle extra business—much of which can be credited to off-premises changes.

Krystal’s delivery penetration jumped from 2 percent to more than 60 percent systemwide this past year, with 60 more units expected to come on in 2019. Late-night sales boomed 8 percent last year in response. About 50 percent of all third-party orders arrived after 10 p.m., and 75 percent occurred post-4 p.m. Average check rose across all dayparts.

In some locations, Krystal even doubled its sales after 10 p.m. Certain markets expanded their hours of operation and went 24/7. Others opened “24/2,” or 24 hours on Fridays and Saturdays.

And as sales return to positive territory, Krystal appears ready to grow again. “We’re starting to recruit for new franchisees to come into Krystal and build this prototype,” Macaluso told QSR earlier in the month. “So it would be someone coming into a new market to build this new build that we know will do tremendous volume. That’s super exciting. We’re going to start that process here the next quarter.”