The chain will use 20 million users and an ad surplus to grow customer awareness.

Wingstop CEO Charlie Morrison has said on multiple occasions the brand doesn’t base decisions around competition.

The only competition Wingstop recognizes is itself, which will come into focus in 2021 as the brand laps remarkably productive quarters from 2020. Because of consumers’ shift to off-premises, domestic same-store sales skyrocketed 31.9 percent in Q2 and 25.4 percent in Q3 of 2020. Even in Q4, comps rose 18.2 percent.

While the performance is certainly a difficult act to follow, especially given the rollout of vaccinations and ease of dine-in restrictions nationwide, Wingstop believes it has the proper levers to successfully lap last year’s sizable results and deliver on its three- to-five-year target of mid-single digit domestic same-store sales growth.

READ MORE: How Wingstop Became a 'Category of One'

He added Wingstop will continue to use its national advertising strategy to close the awareness gap between it and top-10 brands. In 2021, the chain plans to leverage its system sales growth of 30 percent and surplus advertising funds to launch premium-placed ads in places it knows people will be watching, such as live sports.

“Any time you experience the kind of growth that Wingstop has experienced, and I would note, obviously this year growing systemwide sales by 30 percent, presents an opportunity for the company to evaluate investments we can make to further that performance into future years,” Morrison said Wednesday during the brand’s Q4 earnings call. “As you know, this brand has already grown to about $2 billion in systemwide revenue now. We think there’s a necessity to make sure we have the right infrastructure, systems, and people in place to catapult us well beyond this point.”

One lever Wingstop won’t pull is adding a loyalty program. Morrison said the key is engaging with its large database of guests productively. He doesn’t see any pressure to provide a discounted-based loyalty program in order to do that.

“We believe we are in a category all by ourselves and a category of one,” Morrison said. “We don’t have a direct competitor that we feel we have to engage in a price war as most [quick-service] players would do.”

How close is Wingstop to closing that awareness gap with those top-tier brands? Morrison said the distance is in the mid-teens in terms of percentage points. From a storefront perspective, Wingstop ended 2020 with 1,327 U.S. stores while the brands it’s chasing, like McDonald’s, KFC, Taco Bell or Burger King, have thousands of more points of distribution. So there’s a substantial gap with just penetration.

But closing the gap was always a long-term outlook, and he noted Wingstop is continuing to chip away. The CEO said Wingstop slimmed the margin by a small amount in 2020, but he emphasized that a small amount can yield a substantial impact to revenue.

“I think we’ve done an exceptional job, and it’s showcasing itself in the top line growth,” Morrison said. “And as we continue to invest and point our advertising muscle towards those people that really don’t know much about Wingstop, or maybe are aware but haven’t considered an occasion—which are those heavy [quick-service] users—there’s a huge, huge base of customers out there for us to go after and share some occasions with some of those other competitors.”

To Morrison’s point, Wingstop’s AUV increased to roughly $1.49 million in Q4 compared to $1.25 million last year. The growth lifted development numbers and increased operators’ interest in adding to their portfolio, especially since investment costs remained relatively unchanged in the past number of years. In 2020, Wingstop opened 153 net new restaurants, 127 of which were in the U.S. This includes a record 59 net new openings systemwide in Q4. As it enters 2021, the domestic pipeline comprises more than 700 stores—also a new record—which is up from 610 in the previous year.

Consistent with prior years, 80 to 90 percent of the pipeline consists of existing franchisees looking to expand. Morrison said Wingstop is fortressing about 25 key markets in the U.S., which makes up about 75 percent of the total development. Regarding new formats, Wingstop now has 13 ghost kitchens across the globe and is working on expanding those concepts domestically.

It’s important to note Wingstop’s growth in sales and locations has come while purposefully selecting “B” real estate, like strip centers. As Morrison described it, Wingstop stores “aren’t on the street corner with giant golden arches on them.” In the future, the CEO said the brand will lean even more into that strategy.

“They just work for us,” Morrison said. “We don’t need that endcap prominence in a strip center nor do we need a standalone building in order to generate the kind of performance we’ve seen. Separately, if anything, we might go to ‘Cs’ and ‘Ds’ by way of incorporating ghost kitchens into our mix. We think those have a more prominent opportunity. And if anything, maybe reducing seats in dining rooms over time as we continue to drive our digital mix north.” 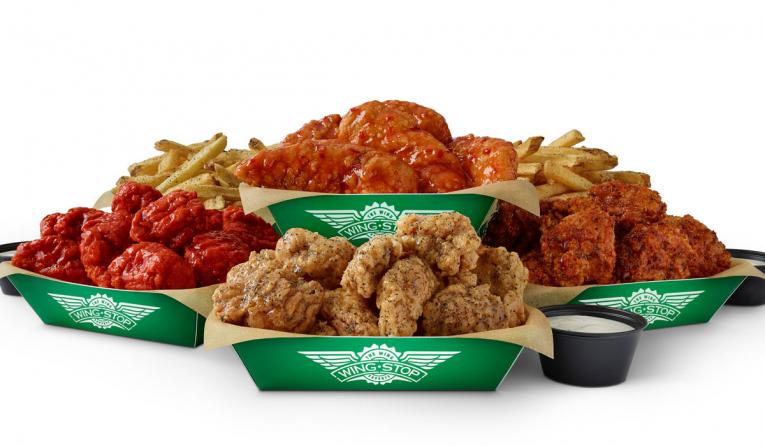 Wing prices are rising (again) in the marketplace, but Wingstop is weathering the pressure.

CFO Michael Skipworth noted that when comparing the environment to 2017 when Wingstop saw similar inflationary numbers, the chain is running much lower in food costs, even with higher wing prices. He attributed that to a combination of disciplined menu pricing and pricing mechanisms with suppliers.

Morrison views the issue as pandemic related. He believes as the country returns to normal, brands like Chili’s—which rolled out It’s Just Wings—will put their fryers to use to take care of the dining room, and the flow of chicken wings will reduce.

“A $1.5 million AUV, even with the unit economic challenges of high wing prices, still delivers exceptional cash on cash returns,” Morrison said. “So we don’t think that we need to get into a position of material changes. I think we’re fine right now. And we do believe it’ll remain transient. It’s proven that in the past. Other competitors are pricing at very low levels to generate volume. We know that’s not sustainable. We still believe we have pricing power within our top line, so we’re going to continue forging ahead on our strategy.”

Morrison said Wingstop will continue to work on ways it can use dark meat in its products, like the chain’s test of bone-in chicken thighs. The CEO said it “allows us to pull that lever if we need it.”

“We had a good test,” Morrison said. “We’re going to take that learning, expand upon it this year. There’s not a specific commitment to roll that out yet in our pipeline. But we do have enough learning to be able to support what we believe is going to be a product for the future for the brand. Dark meat in general becomes a great opportunity, as well.”

The other macroeconomic factor is the potential increase of federal minimum wage to $15. If such legislation were to pass, Morrison doesn’t expect Wingstop to be impacted significantly since it already operates in states above the current federal minimum wage, which is $7.25. He noted that systemwide, workers are paid between $11 and $12 on average, so the federal minimum wage would have to graduate up to those levels before it affected the company.

His personal opinion is that right now is not a good time in the economy—given what’s occurred in the restaurant industry—to discuss minimum wage.

“What we’re really talking about is trying to get especially small independent operators back on their feet and growing their business,” Morrison said. “… We do have pricing power in our P&L, and that’s how we’ve addressed minimum wage legislation over the past few years in markets where we’ve seen it grow. It’s challenging. Right now is not a good time to be even contemplating a minimum wage increase. What we should be doing is everything we can to stimulate the economy.”