Delivery in 5,000 U.S. restaurants. Fresh beef in Quarter Pounders. What are the results so far?
Fast Food | March 2018 | Danny Klein

There is zero room to accuse McDonald’s of being a stagnant restaurant company. Under CEO Steve Easterbrook’s leadership, the global giant continues to shift. These moves include, but are nowhere near limited to: fresh beef in Quarter Pounders, mass delivery, removing cheeseburgers from Happy Meals, kiosks, cage-free eggs, and operationally, a refranchising initiative that has increased the company’s franchise unit ratio from 81 percent to 91 percent in just three years.

With global same-store sales growth of 5.3 percent in fiscal 2017, year-over-year, it’s crystal McDonald’s has seen success from these risk-taking initiatives. This was the company’s best sales performance in six years. Before 2017, customer traffic dropped in each of the past three fiscal calendars.

Actually pinpointing these changes and separating them, and trying to define which factors are driving the turnaround more than others, can be difficult. For example, understanding the effect of removing high-fructose corn syrup from buns is more a long-term vantage point than an immediate count-the-dollars one.

But there are places to focus the microscope. One is the fresh beef announcement, which, considering the depth of McDonald’s operating history, and what that means from a supply chain standpoint, is a massive undertaking. It’s easy to see why USA president Chris Kempczinski called it the “most significant change to our system and restaurant operations since All Day Breakfast.”

McDonald’s first unveiled this plan toward the tail end of March 2017. By mid-2018, the company said, it would roll fresh beef quarter pounders out across the system. And by March 6, McDonald’s was using fresh beef, cooked to order, in all Quarter Pounder and Signature Crafted Recipe burgers at about 3,500 U.S. restaurants, with the entire system expected to follow suit by early May. This started with a pilot in Dallas and Tulsa, where McDonald’s said it saw a 90 percent customer satisfaction score from guests who ordered the fresh-beef burgers, and a 90 percent intent to repurchase.

Earnest Research provided QSR with an exclusive look at some data that takes this conversation a step further. The company analyzed anonymous transaction data to understand why McDonald’s flipped the frozen switch. It’s a different angle than the typical qualitative and quantitative survey data gleaned for such tests. This is based on actual spend.

In this case, the data showed Tulsa, a fresh beef test market with 75 restaurants starting in November 2016, cruised past McDonald’s sales in other markets. Following the introduction of fresh beef, sales tracked by Earnest in Tulsa continued to grow, year-over-year, with sales climbing to 16.6 percent growth in Q1. The rest of the country, meanwhile, grew at a rate of 5.2 percent. In the next quarter, it was 12.1 percent versus 5.6 percent. See graph below. 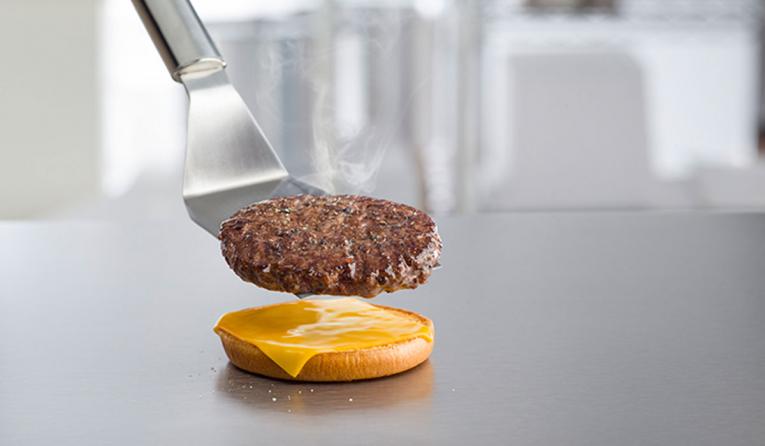 “You could see there was pretty material outperformance in Tulsa compared to the rest of the country as it was being rolled out,” says Andrew Robson, president and chief revenue officer of Earnest Research.

“Often times, what we’ve come to learn is that in test markets there is a lot of ad spend behind those rollouts to get awareness out,” he says. “The question mark is a. what was the amount of ad spend that went into Tulsa for example? Did that have a meaningful impact in the uptick in business? And if so, could they achieve that as they roll it out nationwide? That’s a good question.”

He revealed some interesting figures from the company’s expansive UberEATS platform. McDonald’s is currently delivering to more than 5,000 U.S. restaurants, which is solid growth from its spring announcement in 2017 that it would be in 3,500 locations by the end of June.

But there was always going to be a question of how this would play out from a financial perspective. McDonald’s, for the most part, isn’t exactly designed physically to adhere to this kind of platform. In other words, there aren’t designated pick-up stations or added workers specifically for off-premise business. So would an influx of delivery orders stuff throughput? Would walk-in customers waiting in line carry that burden? Would employees?

Ozan, however, had an amusing, yet pragmatic answer: “I won't surmise why that is or what they're doing prior to ordering McDonald's, but it's become—so we know it's a younger demographic, we know it's the time of day that's attractive to us.”

So these delivery orders are not coming at peak times necessarily. In fact, Ozan said 60 percent of orders are in the evening and late night, especially overnight when you get closer to college campuses. What Ozan is alluding to then is the added business of younger consumers who might have just done something that’s keeping them from leaving the house or dorm, and are suddenly very hungry. Don’t really need to fill in the lines there.

About 65–70 percent of delivery sales are incremental to McDonald’s existing business in participating restaurants, up from 60 percent when McDonald’s first tested UberEATS to 2,000 restaurants.

When you look at this growth, it’s promising on multiple fronts: McDonald’s is gaining business when it has capacity—dinner and overnight—and adding orders incremental to its existing revenue. There’s also the less tangible benefit, which is the chance that some of these late-night, younger dinners might return for breakfast, or lunch, or maybe they might tell somebody else who hasn’t been to McDonald’s in a while to give it a shot. This can, perhaps, give McDonald’s and some of its other lesser-publicized initiatives a millennial-driven and Gen Z audience it didn’t have before.

For example, something liked its recent climate change plan, where McDonald’s said it plans to reduce greenhouse gas emissions related to restaurants and offices by 36 percent by 2030, can find a new customer base with a willingness to listen. Something along the lines of, “I didn’t know McDonald’s wanted to reduce emissions intensity by 31 percent.” And again, some of those less calculable changes, such as removing artificial preservatives from Chicken McNuggets, now suddenly make a lot more sense when you imagine an influx of new customers into McDonald’s longstanding pool of guests. First reaching this demographic through their convenience- and technology-driven bias, and then appealing to their socially conscious side with a nod to real menu improvements, can only benefit McDonald’s long-term. The chain has, in a multi-pronged way, been preparing for the future without really broadcasting it.

From the franchisee level, operators pay a commission fee to UberEATS for each delivery, which means orders carry a lower margin than typical tickets. Ozan said the fact that 70 percent incremental is giving franchisees more dollars and the company’s breakeven, incrementally is well below 50 percent.

“So there's a lot of room, let's say before we get anywhere close to breakeven from an incrementally standpoint,” he said.

As Motley Fool points out, this is referencing a profitability study known as cost-volume-profit analysis. Meaning, franchisees cover their fixed operating costs through existing sales and the only costs related to incremental delivery are variables—food and labor. So, delivery sales have a lower breakeven point, giving the operator plenty of room to cover that commission. It’s a revenue stream without additional overhead investment, unlike the “Experience of the Future” redesign, which calls for kiosk, exterior and interior upgrades. Not to mention the McCafe beverage equipment upgrades in recent years that have pinched franchisees.

All this success is a better look than early results from the $1 $2 $3 Value Menu.McDonald’s had its worst dollar decline in its history as a publicly traded company March 2 when shares closed the day down 4.8 percent. It was also the company’s biggest percentage drop since October 2008. The week as a whole was McDonald’s worst percentage decline for shares since 2008 and the steepest total dollar decline for a week ever, off 9.1 percent.

This came after David Palmer of RBC Capital Markets cut his expectations “due to deteriorating industry conditions and a disappointing early sales impact from the $1, $2, $3 value menu." Palmer lowered his price target for McDonald’s stock by 9 percent from $190 to $170. Shares were trading for  $157.04 early Friday.

The first-quarter same-store sales forecast also fell to 1 percent from 3.5 percent. A FactSet consensus is calling for $3.8 percent growth. Palmer’s $170 price target is still nearly 15 percent higher than the $149.27 price McDonald’s closed that day, a level not seen since last May. He also reiterated an outperform rating, despite the cut.

“Our sense is that the $1 $2 $3 platform stole attention from local marketing, particularly at breakfast, which likely slowed as a consequence. In addition, we believe $1 $2 $3 menu’s positioning as a variety play protected franchisee profitability but lacked the ‘hero’ item necessary to resonate with value-conscious consumers,” the RBC Capital Markets analysts wrote.

In pretty much all ways, this strikes as a short-term issue that won’t dampen McDonald’s future outlook. While McDonald’s competitive set in the value market is critical, it’s clearly a piece in what’s becoming a very well-thought out and lucrative puzzle for the chain. These dots, also, are just starting to connect.