Burger King Gets Back to Pre-COVID Sales

And, as usual, Popeyes continues to surge ahead.

It’s been 18 months since Jose Cil, after 18 years with Burger King, took the reins at parent company Restaurant Brands International. The fast-food giant’s former president rolled right into a refresh, with a focus on guest experience, employee engagement, digital innovation, and franchisees.

“Little did we know at the time how important these commitments would be to guide our approach to managing through the COVID-19 crisis,” Cil said Monday, 100 days since the pandemic “turned business in our home markets upside down.”

The company’s Monday update touched on a myriad of topics. Firstly, its three brands—Popeyes and Tim Hortons in addition to Burger King—have progressed from alarming drops that began in mid-March when self-isolation and dining room closures pressed restaurants nationwide.

A LOOK AT JUST HOW IMPRESSIVE POPEYES' PERFORMANCE HAS BEEN

Anchored by “strong performance in drive thru,” Burger King has returned essentially all of its sales despite most of its North America dining rooms remaining closed or operating with reduced seating.

This aligns with an overall trend for quick service's biggest chains. In the period ending June 14, total major restaurant chain transactions declined 12 percent versus the same week in 2019, according to The NPD Group. That’s 1 percent below the previous week, but the ninth consecutive period of improvement, year-over-year. Quick-service restaurants bumped slightly to negative 11 percent (compared to last year) from negative 13 percent the previous week.

McDonald’s reported earlier in the month that its domestic comps, for all of May, declined just 5.1 percent, year-over-year. They fell 19.2 percent in April. Wendy’s finished May down only 1.9 percent in the U.S. after slipping 14 percent the previous month.

Popeyes continues to turn in crisis-defying performance, however. Cil said sales growth remained in the “very high 20s” last week, even as the chain began to lap the strongest period of fiscal 2019 prior to the national launch of its now-famed chicken sandwich. Nearly all of Popeyes’ U.S. restaurants are open for takeout and delivery (the majority of dining rooms are closed). In mid-June, Popeyes also brought its chicken sandwich to test in Canada, “where we have seen really strong demand, giving us optimism that the quality of our sandwich will transcend markets and continue to attract new guests to our brand,” Cil said.

Popeyes’ launched the chicken sandwich last August. So there will likely be a leveling out of comp performance in the coming months, at least relative to the last three quarters, which tracked 10.2 percent, 37.9 percent, and 26.2 percent in Q3 2019, Q4 2019, and Q1 2020, respectively. If not for COVID-19 conditions, the most recent period would have been much higher, too. In January, February, and the first two weeks of March, comparable sales were up in the 30s.

The Canada pilot could provide the international expansion unlock RBI has spoken of for several years with Popeyes, a brand it acquired for $1.8 billion in March 2017. Chairman and former CEO Daniel Schwartz once said the chicken chain had the potential “to be one of the fastest growing, global [quick-service restaurant] brands in the world.”

To Cil’s point, a product that transcends markets could be the ideal ice breaker. As of March 31, Popeyes had 842 international and 2,494 U.S. units, leaving the runway vast. For perspective, Burger King had 7,304 stateside restaurants and 11,544 global. Tim Hortons had 4,002 in Canada and 923 elsewhere.

RBI added Monday that more than 90 percent of its restaurants in its Asia-Pacific markets are open again. In Europe, Middle East, and Africa more than 80 percent are running and roughly 60 percent of the Latin America market is back on line.

Cil said back-end changes installed during COVID-19 should stick for RBI. “Driving rapid digital innovation has been essential to our recovery path as a company. Our teams have rewritten code for our apps; reimagined service opportunities like curbside pickup; and expanded delivery services into thousands of new restaurants,” he said. “The outcome has been a significant increase in digital sales in North America and we believe this trend shift to digital is what guests will continue to demand.

“We believe that the delicious, affordable and convenient meals that you love from us must also be sustainable,” Cil said. “This involves hard and long-term work to serve great food that guests love by focusing on our ingredients, reducing our environmental footprint, sourcing sustainably and investing in people and communities.”

In one example, Burger King is advancing the U.S. rollout of its Whopper without colors, flavors, and preservatives from artificial sources. Cil said all three brands are working on removing ingredients from artificial sources and making progress on packaging and recycling initiatives. Tim Hortons in Canada, for instance, is eliminating enough plastic straws and stir sticks “to wrap around the world one and a half times every year,” Cil said.

A year ago, RBI committed to increase gender diversity and bolster inclusion across its workforce. Cil said, starting immediately, the company will ensure at least half of all final-round candidates interviewing for roles within its four RBI offices will be from groups “that are demonstrably diverse, including race.”

“Despite some areas of progress in becoming more diverse as an organization, we have reflected on our insufficient racial diversity at RBI,” Cil said. “A week and a half ago, we stopped and joined together as a team to learn more about ways we could all serve as catalysts for change through allyship and advocacy. While our charitable foundations do important work with African American and Black communities in the U.S. and Canada, I will not diminish the fact that we do not have enough racially diverse voices and perspectives in our company and we're going to change that.” 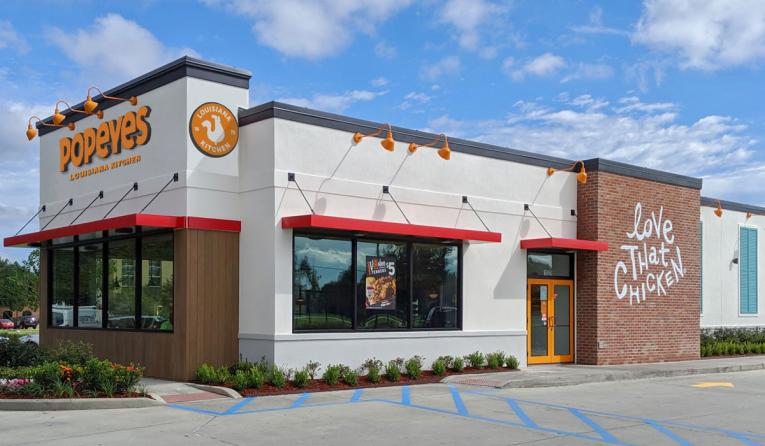 Popeyes is still rolling along, pandemic or not.

In 2019, he added, RBI promoted more women than it had before and, halfway into 2020, already hired more female senior leaders in the company than previously. AdAge reported last week that Burger King added Ellie Doty as its new North America CMO. The spot was vacant in recent years. Marcelo Páscoa, Burger King’s VP and head of brand and communications for North America, joined Molson Coors earlier in June.

Doty arrived from Chili’s parent Brinker International, where she started in 2017 as VP of marketing and was promoted to senior VP and CMO of Chili’s in September 2019. Before, Doty worked at KFC from 2013–2017, including a stint as marketing director and CMO for it Canada division, and clocked time as senior brand manager for Taco Bell and brand and field marketing manager at Long John Silver’s.

“We highlighted subconscious biases in front of the whole company in town hall meetings and deliberately changed our approach to how we source and promote talent,” Cil said of this past year.

“Over the last 100 days, we have chosen to look after our people so they can look after the business,” he noted. “We have continued to hire for strategic positions. We have protected jobs and compensation. We invested in our corporate restaurant team members and established a fund with our owners in Canada to support sick team members. We implemented frequent, weekly communication with our colleagues and restaurant owners so that everyone has known where we stand, what our priorities are and what their roles and responsibilities are—and I'm proud to say that our corporate family and restaurant owners have stepped up incredibly in the face of this uncertainty.”