From Taco Bell to Sonic Drive-In to Starbucks and Shake Shack, some of the country’s most prominent chains continue to devise “restaurant of the future” models built for a COVID-19 world. You can now add Burger King to the list.

The brand Thursday morning revealed new looks that “will deliver flexibility, innovative features and convenient options for how BK food can be ordered and delivered, to fulfill changing guests demands,” it said.

A LOOK AT NEW COVID-19 DESIGNS

Welcome to the Shake Shack of the Future

Get a Glimpse of Sonic Drive-In's New Restaurant Design

Customers will now be able to park in a drive-in area under solar powered canopies. There, they can place orders through Burger King’s app by scanning a QR code at their parking spot, and have food brought to their cars.

Advance orders placed through Burger King’s app will have dedicated parking spots labeled “curbside delivery.” Guests can notify restaurants upon arrival through the app as instructed on the parking signs.

Mobile and delivery orders will also now be available for pickup at coded food lockers facing the exterior of the restaurant. The food will go straight from the kitchen to pickup lockers, Burger King said.

Similar to Taco Bell and Shake Shack (which is set to debut its first drive thru in 2021), Burger King is expanding access through multiple lanes. There are prototypes with either double or triple drive-thrus options. Both feature digital menuboards and merchandising. Burger King said the multi-lane ordering and pickup adds will expedite the process, while a living wall frames a guest’s view into the kitchen interior, complete with Burger King broiler branding. Additionally. an external walk-up window on the glass façade will be an alternative ordering point for takeout.

In perhaps the most striking feature, one of the models includes a suspended kitchen and dining room above the drive-thru lanes configured to reduce the building footprint, making it ideal for urban driving cities, Burger King said. Drive-thru guests have their order delivered from the suspended kitchen via conveyor belt system, and each lane features its own pickup spot.

This specific design features a triple drive thru, with a dedicated lane for delivery drivers. Guests who want to dine in can access the dining room and covered outdoor seating situated above the drive-thru entrance.

What makes this model so unique: it’s a 100 percent touchless experience. 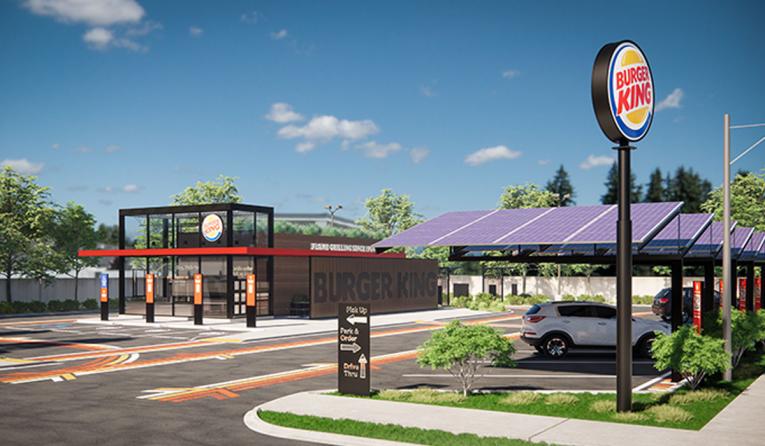 Customers can park in a drive-in area under solar powered canopies.

“In March our in-house design and tech team accelerated new restaurant design plans and pushed the limits of what a Burger King restaurant could be,” Josh Kobza, RBI’s chief operating officer, said in a statement. “We took into consideration how consumer behaviors are changing and our guests will want to interact with our restaurants. The result is a new design concept that is attractive to guests and will allow our franchisees to maximize their return.”

Added Rapha Abreu, global head of design at RBI: “The designs we’ve created completely integrate restaurant functionality and technology. The restaurant of the tomorrow merges the best functional technology with unique modern design to elevate our Burger King guest experience. We designed the interior and exterior spaces like we had a blank sheet of paper, designing without preconceived notions of how a Burger King restaurant should look.”

Burger King plans to build the first of these new looks 2021 in Miami, Latin America, and the Caribbean.

Get a virtual tour in the videos below:

RBI’s real estate is shifting overall. The company noted in August that it would close “several hundred more restaurants than we might in a typical year” across its Burger King, Tim Hortons, and Popeyes footprints in 2020.

The company said it expected to end 2020 with a similar number of restaurants relative to where it closed 2019, which would be a big change for one of the sector’s biggest net-unit growth players. RBI grew its system by 1,342 restaurants last year. Burger King alone added 1,042. About a decade ago, the company had only 12,000 restaurants. There are currently 27,059. In each of the last three years, RBI boasted net restaurant growth of over 5 percent.

RBI made progress on the sales front in recent months. In Q2, more than 4,500 restaurants returned to bring coverage to 93 percent globally. And by the end of the period, RBI was back to 90 percent of prior-year systemwide sales. Dining rooms are currently open in about a third of restaurants in the U.S. and Canada.

All represented positive trajectory. Burger King’s domestic comps jumped from the negative mid-30s at the end of March to negative mid-teens by Q2 close. But by August, the company said, they were flat on a year-over-year basis.

Nearly all of Burger King’s dining rooms were closed during much of Q2. Burger King, however, touts more than 6,500 drive thrus across the U.S. and was able to grow comparable sales in the channel in the positive low 20s, which illustrates some of the thinking behind the new designs. Drive-thru mix lifted to more than 85 percent of total sales versus two-thirds in 2019. RBI also brought delivery to nearly 2,000 new Burger Kings since February and now has 6,100 U.S. locations onboard.

In June and July, Burger King began reopening dining rooms in roughly a third of locations.