The daypart is mixing roughly 13 percent.

It’s that RBI has mentioned the Burger King breakfast opportunity several times in the past 12 months, but has little progress to show for it. As recently as February, Cil told investors, “We think it could be a much bigger part of our business long-term, and we're making the similar investments in terms of quality and making sure we have a broader offering, both on product and beverage and making the commitments for investing behind that with media as well as with digital.”

Since then, the breakfast daypart held steady at roughly 13 percent of overall sales, much of which is tied to the Croissan’wich. Cil attributed the lack of progress to prioritizing other, more immediate opportunities. But now, the Burger King U.S. team has the breakfast opportunity “square in its sights” and is working closely with a group of franchisees to build a long-term plan with quality food and beverage options at its core. The plan is multilayered, but the mission is simple—make Burger King the preferred breakfast space in America.

“There’s still so much more we can do on top of the existing breakfast business in terms of menu expansion, food and beverage innovation, product quality, everyday value, and awareness,” Cil said during RBI’s Q1 earnings call. “And while our long-term for breakfast will take some time to develop, test, and launch, we’re not standing idle.”

Burger King's Next Act: Value You Can Count On

In the last week of the first quarter, Burger King brought back the French Toast Sandwich, an item showing growing promise as an average check driver. The product comes with sausage, bacon, or Black Forest ham; a fluffy folded egg, and cheese between pieces of French toast, topped with maple butter sauce. The burger chain also has plans to make the Croissan’wich “an even more powerful anchor of the breakfast business” with product quality upgrades that will be rolled out later in 2021.

“You'll see a shift at Burger King from trying to do a promotional activation short-term to drive visits and transactions, that high-low approach, I think you'll see us build a sustainable, long-term plan on meaningful platforms," Cil said. "And that's why I mentioned the breakfast, the importance of breakfast, how strategic it is for our business, and the investments we're making behind it long-term to make a meaningful push on that over time.” 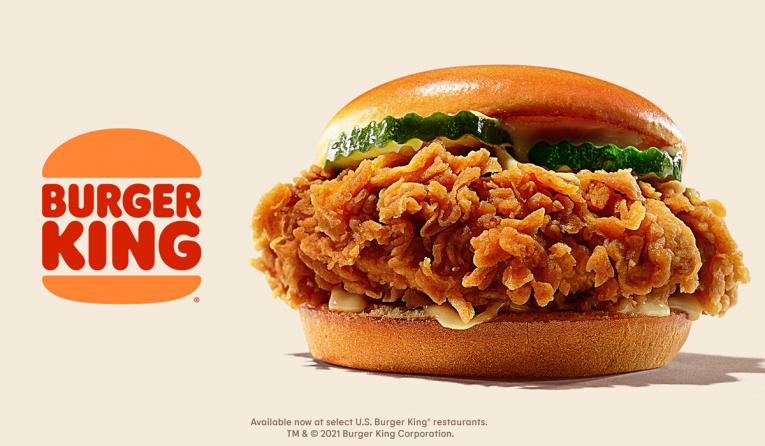 The chicken sandwich will be available nationwide in the summer.

The reenergized effort comes as Burger King’s same-store sales lifted 0.7 percent in Q1, or a decline of 3 percent on a two-year basis. Digital mixed 9 percent, an increase of 40 percent, year-over-year.

In the U.S., the launch of the $1 Your Way value menu resulted in nominal monthly sales per restaurant reaching their highest level in recent history. This drove improvement in visitation year-over-year in March compared to the industry. The new menu closed a gap on value and helped Burger King catch up on sales in March. As for growing average check, the burger chain is laser-focused on menu innovation. For example, the Sourdough King sandwich and Cheesy Tots returned in Q1 and achieved record-high AUVs.

But the main event in terms of product news was the rollout of Burger King’s hand-breaded chicken sandwich, which is now at half of restaurants in the U.S. It will be available nationwide in the summer. Burger King believes the sandwich will drive visits and check, prove incremental, and pave the way for future innovation.

“It’s a balance approach, and you’ve heard me say that multiple times over the years—the importance of Burger King in particular having a balanced approach,” Cil said. “Obviously driving our core, but having a balance with premium offerings as well as value. The quarter was encouraging in every regard.”

Tim Hortons continues to serve as RBI’s true digital muscle, with the channel mixing more than 30 percent in Q1—nearly doubling year-over-year. It’s the largest quarter of digital sales yet among any of RBI's brands.

The biggest impact came from the redesigned “Roll Up the Rim” contest, which led to an incremental two million app downloads in March. It’s twice the amount Tim Hortons saw last year during the contest and significantly higher than a typical month. Engagement on the app hit an all-time high, with digital mixing more than 40 percent during the peak of the contest, and more than 50 percent of transactions coming via the loyalty program.

“Our digital performance at Tims in Q1 gives us a picture of a brighter digital future in Canada as well as what we want to achieve at Burger King and Popeyes,” Cil said.

Tim Hortons comp sales dropped 2.3 percent in Q1, or a 12.6 percent decline on a two-year stack. The restaurant’s recovery has been stifled by higher restrictions across Canada. In Ontario, where nearly 40 percent of Canadians live and nearly 50 percent of Tim Hortons are located, individuals are under mandatory stay-at-home orders until at least May 20. The closure of dining rooms has pushed Tim Hortons’ drive-thru sales up 23 percent compared to last year. In spots where Canadians are able to have more normal routines, sales trends prove they’re coming back to Tim Hortons. Comps in rural and suburban areas were flat to slightly positive in the first quarter. 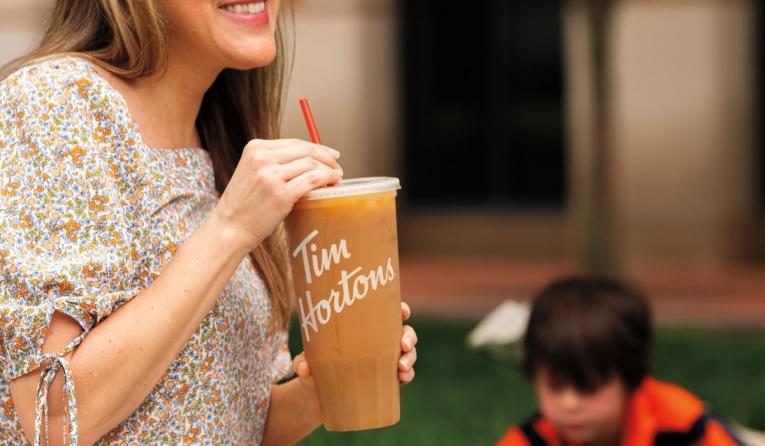 Canada’s lockdown has affected Tim Hortons' morning daypart the most, with the largest drag on sales coming from routine coffee customers.

Canada’s lockdown has affected the morning daypart the most, with the largest drag on sales coming from routine coffee customers. But the chain has remained focus on innovation. The launch of its dark roasted coffee helped drive 2 percent growth in overall coffee incidences in Q1—the largest increase the brand has seen in three years.

Additionally, the rollout of Freshly Cracked Egg was Tim Hortons’ biggest change in the morning daypart in several years. It entered stores in early February, and by the end of the month, the breakfast food category delivered positive year-over-year and two-year comps sales growth. Tim Hortons saw positive growth year-over-year in the breakfast daypart overall in the last few weeks in March. Two-year comps remained in the negative low-single digits. Regarding lunch and snacking dayparts, the Roast Beef Sandwich notched the highest satisfaction score of any main food item on the menu.

“Overall, the momentum in our menu innovations as well as our strong pipeline of new innovations planned for the back half of the year and well into 2022 gives us a lot of confidence that our back-to-basics plan is working as we intended,” Cil said. “We view the timing of these menu innovations that are generating such positive reactions from our guests to be very important as the Canadian economy reopens later this year and Canadians return to more normal routines.”

The pace of Popeyes’ growth far exceeded its sister brands in Q1. The chicken chain opened a net of 25 stores, its best Q1 performance since 2017. That translated to 4.8 percent growth year-over-year, compared to 1.3 percent at Tim Hortons and a decline of 0.8 percent at Burger King.

At the same, four-wall profitability on average is at an all-time high. Cil said there’s a long runway of growth in both the U.S. and internationally because of an “amazing appetite to put capital behind Popeyes.” The chain has recently announced plans to open more than 1,000 restaurants over 10 years across the UK, India, Mexico, and Saudi Arabia.

“At this point we’re focused on selecting the best partners and the best locations with our partners that will make the brand even more convenient and accessible while driving traffic, sales, and profitability over the long-term,” Cil said.

Popeyes same-store sales increased 1.5 percent in Q1, or 27.7 percent on a two-year basis. As it has for many months, the chicken sandwich is broadening consumer awareness and trial for other parts of the menu, including bone-in, boneless, and seafood. Digital mixed 17 percent in Q1, more than double last year’s total. Popeyes also launched a pilot of a digital-first loyalty program to drive incrementality and change its low frequency, high check relationship with guests.