In February, Tom Curtis, Burger King’s president of U.S. and Canada, unveiled quite the turnaround plan for one of the country’s most recognizable burger brands.

Words turned into action throughout the first quarter.

To elevate operations, Burger King built off of its first round of menu simplification and launched a late-night specific menu in early February. The streamlined selections allow franchisees to stay open later by minimizing complexity while mitigating sales impact, Cil said.

The menu's goal is to balance innovation and value and keep the Whopper top of mind. To treat the hero burger as the “multi-billion-dollar brand that it is,” RBI CEO Jose Cil said Burger King removed it from core discounting and replaced it with more variety—The Big King and Quarter Pound King sandwiches. In conjunction with the switch, the brand lowered its 2 for $6 Mix n’ Match offer to a 2 for $5 deal.

Additionally, after leveraging guest insights to create an item with more portability and one that’s priced between the Whopper and Whopper Jr., Burger King revealed the Whopper Melt. The new item, which comes in three flavors, was teased as the first of more Whopper-centric innovation to come later in 2022. The innovation proved to be incremental to the burger platform and had strong messaging with high-quality ads, Cil said.

The first quarter marked the first time the chain offered exclusive builds and meals through its web/app platforms. Digital mixed 9 percent at Burger King in the quarter, which is the fewest among RBI’s brands, but a sequential improvement from Q4.

Burger King’s U.S. sales declined 0.5 percent in Q1, driven by last year’s federal stimulus, macroeconomic headwinds in March, and a modest reduction in operating hours. It was offset by the chain’s focus on core offers, as opposed to core discounting last year.

Because of ongoing efforts, Burger King narrowed the gap to its peers by a few hundred basis points in Q1, the CEO said. He also noted that guest satisfaction has improved sequentially over the past three quarters.

“This is no victory lap, but we’re encouraged by this continued sign of progress, but know we still have a long way to go to recapture market share and set the BK brand up for the future. The team has worked hard to make a difference in a short of amount of time, and I look forward to sharing more updates in the back half of this year, as we reclaim the flame,” Cil said.

“Our strong foundation, brand awareness, local expertise, product innovation, and digital capabilities have contributed to a resilient international business that is well-positioned for growth,” Cil said. “And we're optimistic of the long-term opportunity to expand this highly scalable business in new and existing markets around the world.”

In March, the brand announced it was removing ownership stake in more than 800 franchised stores in Russia, which represented 2 percent of systemwide sales and 1.7 percent of EBITDA at the end of 2021. During Q1, Russia had a roughly $12 million impact on adjusted EBITDA year-over-year.

“Over the last five years, Russia has averaged about 80 net new restaurants a year. Despite the loss of this contribution, the strength and diversification of our global partners across many growth markets keeps us well-positioned to accelerate overall net restaurant growth in 2022,” CFO Matthew Dunnigan said. 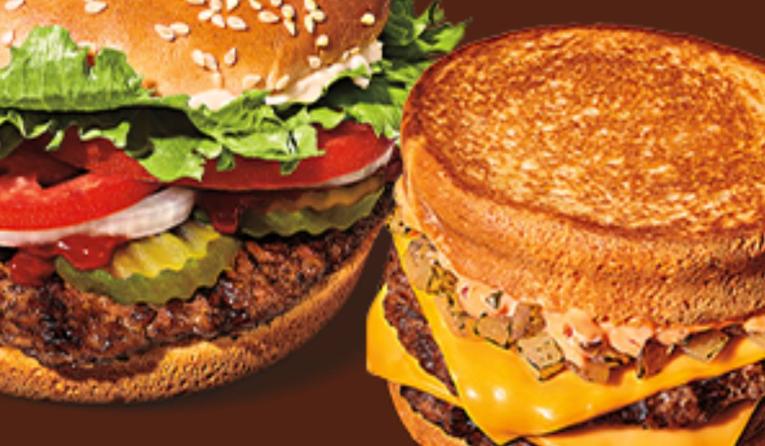 The introduction of the Whopper Melt fulfills Burger King's promise to do better work around the burger's platform.

None of RBI’s chains grew more than Popeyes, which opened a net of 66 stores (30 in the U.S. and 33 internationally)—the highest Q1 mark since it was acquired five years ago. The chicken chain is on pace to reach record net unit growth in 2022, including the opening of more than 200 locations in North America. More than half of those will feature double drive-thru lanes.

Popeyes finished the first quarter with 3,771 stores globally—2,784 in the U.S. and 987 internationally. That’s 8 percent growth year-over-year, the highest among any RBI brand.

In the five years since RBI bought Popeyes, systemwide sales grew from $3.2 billion to more than $5.5 billion, adjusted EBITDA more than doubled to excess of $225 million, and more than 1,000 stores have been added to the portfolio.

Tim Hortons’ Canada comps rose 10.1 percent percent, but for the rest of the world, same-store sales slid 1.2 percent. The coffee chain continues to be RBI’s highest-performing digital chain, with the channels mixing more than 36 percent in Q1. Tim Hortons completed the quarter with 5,320 stores globally, including 3,928 in Canada and 1,392 internationally.