Paper coupons are now likely a thing of the past, the CEO said.

In early August, Jose Cil, CEO of Burger King parent Restaurant Brands International, unveiled a multifaceted plan for the burger giant to get back on track.

The strategy involves placing more focus on priorities that produce the biggest impact, and moving quickly on it. This includes driving innovation in the core menu and accelerating daypart extensions, working with franchisees to improve operational execution, committing to a fully integrated digital experience, reimaging the portfolio to improve guest experience and ROI for operators, and translating the chain’s advertising creativity into better brand loyalty.

Third-quarter results indicate that plan is off to a rather sluggish start. Burger King’s U.S. same-store sales dropped 1.7 percent year-over-year, and decreased 2.8 percent on a two-year basis.

Cil said the decline was primarily driven by two factors—the first being underperformance of value offerings. Q3’s “Buy One, Get One for $1” and “2 for $6” promotions fell short of 2020’s “2 for $5” deal by a "considerable" amount. Cil also pointed to the impact of core discount offerings from competitors.

The second factor was the intentional decision to reduce investment in paper coupons, which Burger King has historically over-indexed relative to its peers.

The CEO noted that two of the chain’s biggest campaigns during the quarter, the Ch’King sandwich and Real Meals, were unable to offset the headwinds.

“We're keenly aware of this gap and are actively building an actionable long-term plan to address,” Cil said during RBI’s Q3 earnings call.

In terms of Burger King’s value proposition, Cil said the chain has spent years spreading itself thin across too many messages with mixed results. He added that the chain has had three times as many value constructs in the market as its lead competitors, which diluted marketing firepower, added to operational complexity, and confused consumers.

To resolve this, the brand will focus on “fewer, more impactful” value platforms and promotions and invest in data analytics to provide a clearer view of the media weight required to drive traffic.

As for cutting back on paper coupons, Cil said they’ve traditionally been an important channel, but their effectiveness has decreased over the years, especially with younger, tech-savvy consumers. Cil knows reduction will impact results in the near-term, but he also believes it’s the right decision as Burger King looks to build long-term sales through digital platforms that allow for tailored offerings and higher returns.

That’s exactly what Royal Perks, Burger King’s new loyalty program, is designed to do—build a stronger base of younger customers with engagement and personalized digital offers.

More than 50 percent of North America drive-thrus are equipped with an outdoor digital menu board, and Cil expects to reach 75 percent by the end of 2021 and near 100 percent by mid-2022.

“With nearly 80 percent of Burger King sales coming from drive-thru, we believe this important initiative will drive significant long-term benefits for the overall business,” the CEO noted. 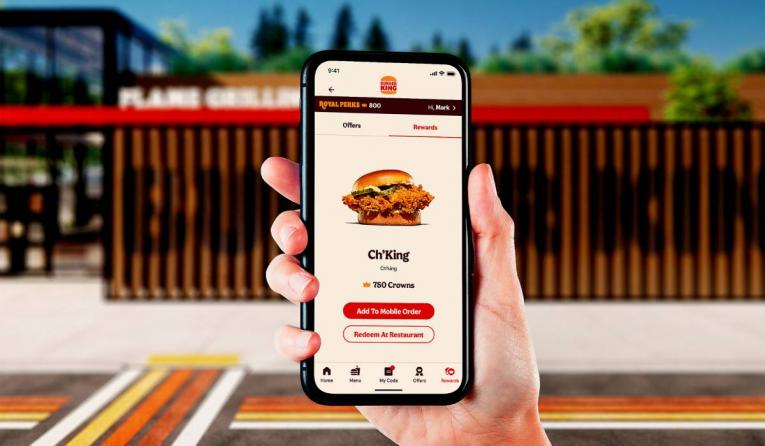 “We recognize that important, long-term value-creating change does not happen overnight,” said RBI CEO Jose Cil. “We're confident in our Burger King leadership, our brand, our team, and our incredible franchisees and their teams.”

Leading the charge on these initiatives is Tom Curtis, who was appointed as Burger King’s new president of U.S. and Canada in August. The industry veteran has spent the past two months visiting franchisees and gathering feedback on menu, digital, and image programs.

Cil said Curtis and operators are working alongside each other to find the biggest areas of addressable opportunity, reclaim market share, and drive long-term sustainable growth.

A significant piece of that is the menu, more specifically, Burger King’s ionic Whopper sandwich. The CEO said data proves the item outperforms the hero product of competitors, however many of the chain’s burger promotions in the past few years have focused on extensions to the core menu rather than emphasizing the Whopper, but that will soon change.

When it comes to chicken, even though the Ch’King sandwich has performed modestly so far, Burger King remains confident in the platform, Cil said. He added that there’s work to be done to reach chicken’s full potential, including improvement of communications, market positioning, and pricing.

The chain also views breakfast as one of the most incremental daypart opportunities.

“We have a sizable existing breakfast business driven by Croissan'wich, but we see runway to expand by developing the menu offering at various price points, serving a good cup of coffee, leveraging our technology to nail speed of service and accuracy, and deliver a more consistent and reliable experience, and having a more thoughtful, consistent marketing and media investment plan,” Cil said.

Another addressable opportunity, according to Cil, is building a road map for image transformation, and that means optimizing sales potential and maximizing ROI for franchisees. As an example, the CEO said the best ROI in certain markets may be a double drive-thru as opposed to redesigns of the dining room.

All of the strategies are part of an overall effort to fuel franchisee profitability. The fourth quarter will be dedicated to finalizing the franchise system’s engagement on the multiyear plan.

“We recognize that important long-term value-creating change does not happen overnight,” Cil said. “We're confident in our Burger King leadership, our brand, our team, and our incredible franchisees and their teams.”

Burger King’s international markets fared better in the quarter. Stores outside the U.S. saw comp sales rise 3.2 percent in Q3, and 8 percent on a two-year basis. The chain finished the period with 18,923 restaurants globally, including 7,093 in the U.S. and 11,830 internationally.

Popeye’s U.S. units experienced struggles, as well, with same-store sales dropping 4.5 percent compared to 2020, but 15.2 percent on a two-year stack. The year-over-year decrease was attributed to traffic declines impacted by labor challenges. Staff shortages led to reduced service modes and operating hours and temporary disruption of a distribution center in the Northeast.

Despite those issues, the chicken chain continues to see more than $1.8 million in AUV. Popeyes’ new nuggets have proven to be incremental and attract guests and check, but they weren’t able to offset traffic headwinds. To boost the platform even further, the chain partnered with rap artist Megan Thee Stallion to release a new sauce and a variety of merchandise.

“We remain confident in the long-term outlook for the Popeyes brand as we continue to innovate across our menu and dayparts, enhance the guest experience, and bring Popeyes to more guests around the U.S. and the world with a robust development pipeline,” Cil said.

Tim Hortons was RBI’s best performing brand in terms of 2020 comparisons. Same-store sales lifted 9.5 percent in Canada year-over-year and 4.5 percent throughout the rest of the world. Overall, the brand saw comps increase 8.9 percent in the quarter, but a 3.6 percent dip on a two-year basis. The coffee chain concluded Q3 with 3,940 stores in Canada and 1,197 outside of the country.